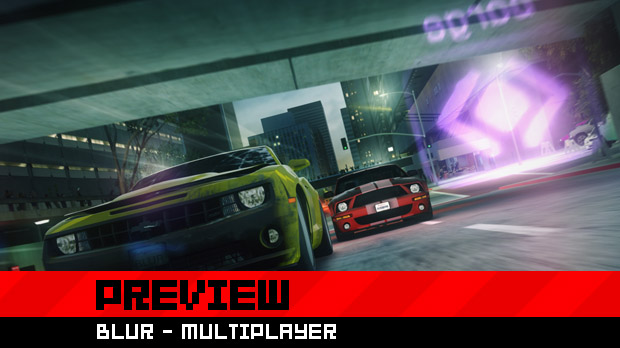 Last week, we attended an Activision event to check out some new games, and it was there that we met up with the folks from Bizarre Creations, just in from the UK. They were in attendance looking to show off Blur‘s local multiplayer action. Bizarre’s Ami Langton had a private suite set up in a Seattle hotel to give us a look at the four-player split screen multiplayer mode of their upcoming racer, so I grabbed our own Nick Chester and Colette Bennett to join in the fun. There was only one problem, though: We were short a player.

Enter Todd. Who is Todd? We’re not exactly sure. All I know is that worked in the hotel where Activision was hosting this event. He could have been the elevator attendant, or just someone that works in the hotel. Who knows. He was in the elevator at the time we were headed up to Bizarre’s suite. He asked us “what floor?” and we asked him to join us in some multiplayer Blur action.

None of us had ever played Blur’s multiplayer before, but Todd won the first round right off the bat. What’s sad is that the other three play games for a living. Todd had no idea what Blur was, and he still won. Bastard, that Todd. I had a good mind to tell his boss that he was playing games with hotel guests on the clock. 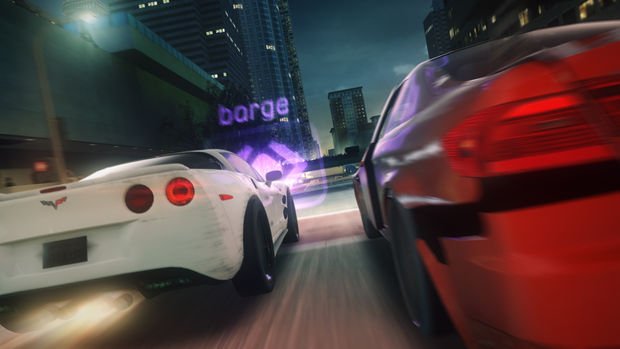 Blur looks like one of your realistic racers with its slick car models and detailed stages, but as far as multiplayer goes, the realism ends with the racing action. They’ve opted for white-knuckle arcade style racing instead, and we’re glad. Some are comparing it to Mario Kart, but we have to say that Blur is quite a bit more fast-paced. It’s has quite a bit more bad-assery packed in, if you will. Oh, and there’s also that whole 20-player multiplayer bit.

The power-ups are what makes Blur fun. You’ll drive over them to pick them up, just like in Mario Kart, but what they do would have Bowser blushing. There’s the typical speed boost, which they call Nitro here. Pick one up and use it to push ahead. If you manage to have two in your inventory of three possible slots, double tap to go extra fast. Insanely fast. 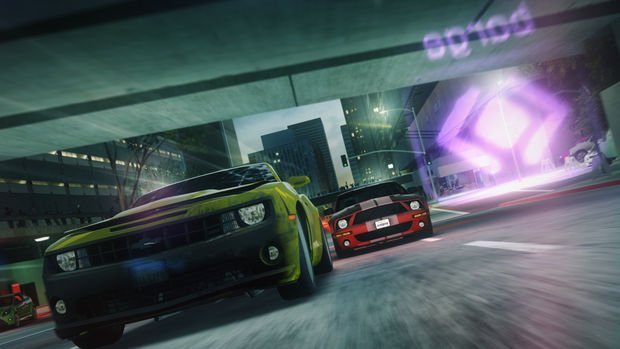 Offensively, a shock charge can stun an opponents vehicle, letting you speed past There’s also a projectile that can blow enemy cars off the road. There’s also a charge that pushes cars away from you, giving you space. These and others make Blur more of a road battle than a race. Thankfully, being blown off the road isn’t as discouraging as you’d think, as the game helps you to recover and put you back on track. No worries, though, as this feels less like hand holding and more like a much needed assist to get you back after the dick that sent you flying.

Even in four-player split screen, Blur looked great and moved along at a very solid clip. We played it on a massive television, but it was apparent that the action would translate to smaller sets well. Unfortunately, Bizarre only had two stages and a handful of cars to show off. We gave both a few solid runs and told them that we wanted to see more.

Blur’s multiplayer was simple to get into, and funny to see the mean streak come out once the power-ups started flying. You’re racing, but you’re fighting; the combination really works. Some of the cars, like the Ford GT, had touchy handling, but not to the point of being frustrating. Just like any racer, some cars are better fits for players than others, and we’re told that there’s in-depth customization options in the game.

In the end, Blur‘s multiplayer was loads of fun to play, even with that bastard Todd winning.