After Digital Reality showed me Sine Mora at gamescom, the Hungarian studio surprised me with another title that’s being co-developed with Grasshopper Manufacture: Black Knight Sword.

Grasshopper calls it an “Interactive Kamishibai” — a Japanese paper drama, or what we in the West might think of as a puppet show without puppets — and a dark one at that. The game’s title is a bit silly, but I wasn’t ready for what I saw. 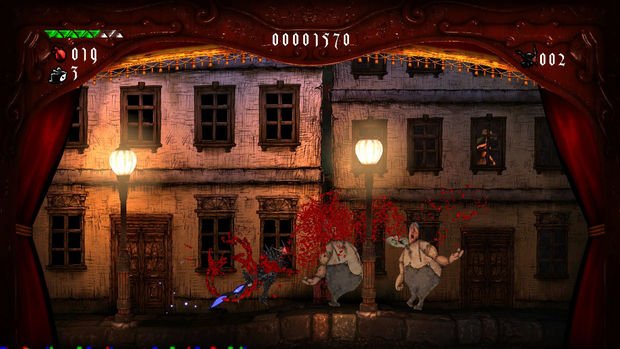 Starting out as a bare-bones marionette, you are literally hanging by a thread, one that is tied around your neck, no less. Jumping back to life and wiggling your way to freedom and resurrection, you find a mysterious blue glowing sword. After picking it up, the puppet is transformed into the Black Knight, and all hell breaks loose.

Black Knight Sword is a 2D hack-and-slash platformer throwback to the 8-bit and 16-bit eras, but you can think of it as Strider on acid. Your protagonist runs around, jumps, and chop down enemies that all look like paper to fit the Kamishibai art style.

The background is filled with paintings that keep sliding in and out of view from all directions to create entirely new settings that elicit different atmospheres as you progress. It’s done in such a way that you don’t have to move from room to room to get that effect, but rather you simply move forward or down stairs while the background changes automatically to place you in a new area. The dynamic background looks ridiculously awesome in motion, and it’s something that screenshots can’t portray very well. 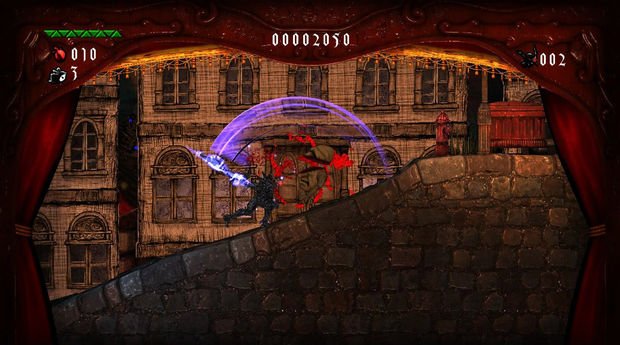 Gameplay-wise the game seems pretty basic. You move around and hack wonderfully bizarre enemies to bits with your sword. Not that it’s easy, though, as some enemies will fly into view or attack you just as you make that easy-looking jump over a gap, disrupting your jump and making you fall to the ground or to your death. If you loved that sort of thing in Mega Man, I guess you’ll enjoy that in Black Knight Sword as well.

The gameplay looked fun enough, if obviously nothing we haven’t seen before, but it’s the concept and art style that sets the game apart from the rest. The collaboration between the Hungarian and Japanese studios looks set to pay off here as well, with Akira Yamaoka in charge of the music and sound effects just like in Sine Mora. Sadly, my time with Black Knight Sword during gamescom was quite brief, but what I saw already blew me away.