In 2007, developer Renegade Kid screwed with our heads and terrified us on the go with its first-person shooter, Dementium: The Ward for the Nintendo DS. Its next handheld title, Moon, stuck to the first-person formula with the action/shooter, Moon. Earlier this year, it tapped into our nightmares again with its terrifying M-rated sequel to Dementium.

So it’s a bit surprising to learn that Renegade Kid’s next game appears to veer wildly from what seemed to be a plotted course — it’s a high speed, 3D racer for Nintendo’s handheld called ATV Wild Ride. We got an exclusive hands-on with the title, and a few hours in, there isn’t a single gun or horrifying monster in sight.

What it does have in common with Renegade Kid’s earlier titles is that it’s technically marvelous, top notch among its handheld peers, and a hell of a lot of fun.

Like a lot of gamers, Renegade Kid’s Jools Watsham played Black Rock Studio’s 2008 stunt racer Pure and had the time of his life. But as a fan of handheld gaming, he wondered: “Why is there nothing like this on the Nintendo DS?” Sure, there are a few other ATV/MX racers on the market, but there was a slight problem — none of them are very good. Unlike most gamers, Jools was in a position to do something about it, and the result is ATV Wild Ride, scheduled to hit retail early next year.

At its heart, ATV Wild Ride is about two things — going really fast and wild stunts. From what I’ve played, Renegade Kid has justified both bullet points, with a speedy game that runs at a smooth 60 frames per second and a nice batch of insane “oh no he didn’t!” tricks.

Renegade Kid offers two control styles for the game, and surprisingly I found the default setting to be the least comfortable. “Type 1” maps the gas and, brakes, and boost to the handheld’s face buttons, with a combination of L/R and the direction pad to pull off various tricks. I personally found this scheme uncomfortable, so finding the second scheme hiding in the menus — which maps the tricks to the face buttons, and the brake/gas to L and R respectively — completely changed how the game felt. Your mileage may vary, but I’d suggest trying both out early on before you get to some of the game’s more difficult races. 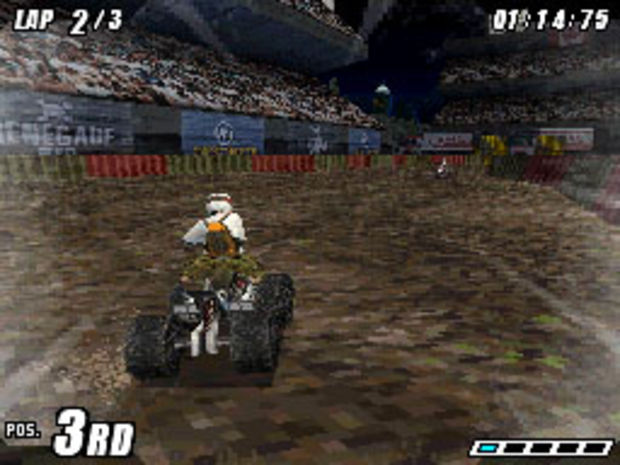 Of the tracks I played (which was most of them), all seem designed with both speed and tricks in mind, with plenty of opportunities to nail jumps. By pulling down on the d-pad, you can “pre-load” a jump; pressing up as you reach the apex of a hill will get you the most air. Once soaring through the sky, you’ll be able to pull of three levels of tricks — A, B, and C — the difficulty of which will depend on your boost pay off. These are the kinds of over-the-top stunts you’d expect from a game called Wild Ride, including one called the “Lanky Doodle” where the racer hops up on the seat and does a single jumping jack in mid-air. (Terrifying, but pretty cool to watch.) The more difficult moves you’ll have to reserve for only the best air, so timing your jumps and finding the best inclines on the game’s tracks is key.

The game single-player experience is broken up into a number of modes, including the standard quick race, a score-based freestyle stunt mode, and time trials. The meat of the game is its “World Tour,” which has you competing against CPU racers around the globe at a number of varied locations, including Mexico, England, Thailand, Canada, and the United States. There are 24 tracks in all, and this is a great way to experience all of the game’s content, and even unlock hidden content in the process.

“World Tour” is broken up into four separate tours, unlocked by earning points for landing in the top spots in each race. As I found out, they get increasingly difficult. During my first and second tour, I spent most of the time ahead of the pack, far and away taking the lead in every event. I mentioned this to Jools who pointed out that the AI riders get smarter and more aggressive as you progress. He was right — by the third tour I was struggling to keep up, my ego kept in check as I remained neck and neck with racers right up to the very end. 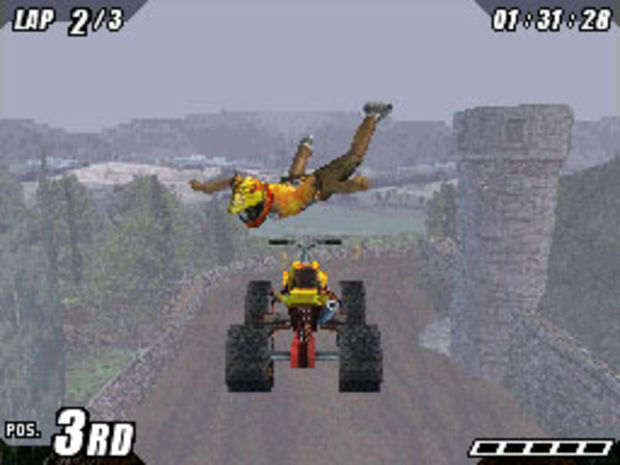 Like I mentioned earlier, there aren’t any monsters lurking anywhere that I was able to see, but ATV Wild Ride does feature its fair share of characters. There are eight riders to choose from, seven of which are locked from the start, each with their own look, style, and voice. One of the riders, the fictional British racer Simon Jeremey, even sounded suspiciously like Mr. Watsham himself.

You’ll also have your pick of ATVs, as well, a total of eight. Like the riders, only three are available at start, leaving you something to work towards as you make your way through the tour. Vehicles are rated on four categories — speed, acceleration, and handling — with some of the best only obtainable as unlockables. 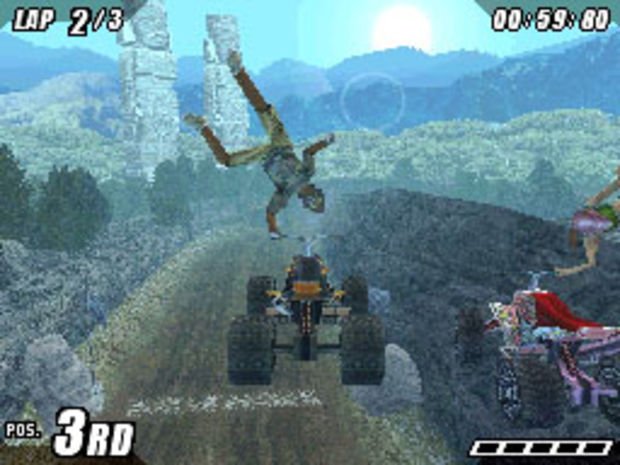 ATV Wild Ride’s music is also notable, as well. It’s the kind of aggressive punk-style music you’d expect from this type of racer, original music by Gregg Hargrove’s band, Swift Justice and the Hired Goons. Why’s that remarkable? Hargrove is Renegade Kid’s co-founder and art director so it’s not likely you’ll hear the music in any other title.

“Back in the day I used to attend their live performances here in Austin,” Watsham tells me. “So I was familiar with their songs already, and when it came to the music for ATV Wild Ride, it felt like a natural fit.”

From what I’ve played, ATV Wild Ride definitely feels like it’ll be a natural fit for fans of high-energy, arcade-style racers when it ships early next year.