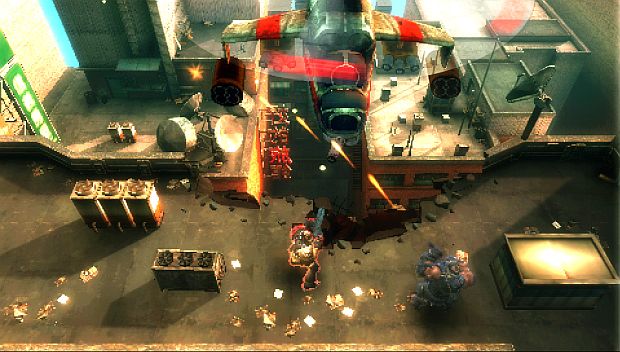 I’ve spent a lot of time looking at Army of Two: The 40th Day. I say looking, because although I was one of the first people to preview the game earlier this year, and I had the opportunity to check it out again this summer at E3, I still haven’t actually played the damn game. Go figure.

So it’s actually ironic that even though I’ve seen more of the “bigger” console title than most people out in the world, the first Army of Two game I played is the PlayStation Portable version. Actually, I wouldn’t really call it playing an Army of Two game in the traditional sense, as the PSP version is an arcade twin stick shooter with a fixed perspective.

That’s right. A twin stick shooter. Wild, I know. Hit the jump to understand what I mean.

Rios and Salem are completely different dudes this time around. Instead of a third-person co-op shooter, this time you’re going to be running on a through the streets of Shanghai, only having to worry about dodging bullets and killing dudes that run up to you. While, yes, you can roll and crouch, and give commands to the guy you are not playing, pretty much all you’re going to be focusing on is shooting. The analog pad controls your character, and the four face buttons control the direction of your shooting. So if you want to shoot up-right, you mash triangle and circle.

Honestly, if this sounds…yucky, trust me, it becomes something ignorable after a few minutes. Controls were not the biggest problem, and with a game as simple as this, it’s fine. 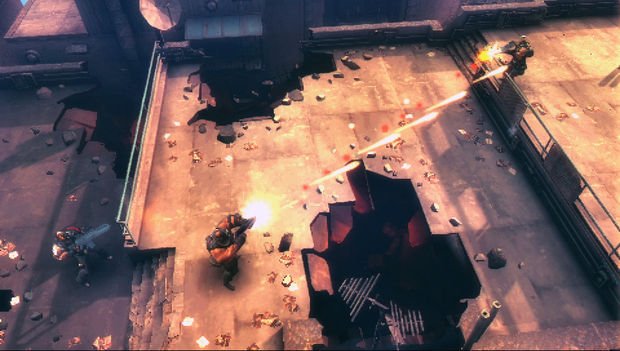 Traditional Army of Two concepts remain. Each character is going to be alternating between the aggro, you’ll be able to buy new weapons and upgrades (but not customize), and you be able to kill innocents or save them. You’ll gain a bunch of money for saving them, “taxed” for killing them, and money is good for upgrades to your weapons.

While most people will probably play this game solo, with the computer taking control of the other half of your “bromance,” ad hoc multiplayer co-op is available, which probably makes it a whole lot easier to deal with the mini and end-level tank bosses. Like its big brother version, the aggro system is in play, and when a tank decides that it wants to shoot only you, having a smart human controlled player to take out the turrets would be appreciated.

Remember back in the days of the Nintendo 64 or the GameCube? Where a major title would come out, and a studio would port a game onto the Game Boy Color or Game Boy Advace, and it would be a platformer and only vague ideas of the main game’s features would come over? This is the exact feeling I get for the PSP version of Army of Two: The 40th Day. No, it’s not something that would make the game a bad game, it just feels really really different from a third-person shooter. 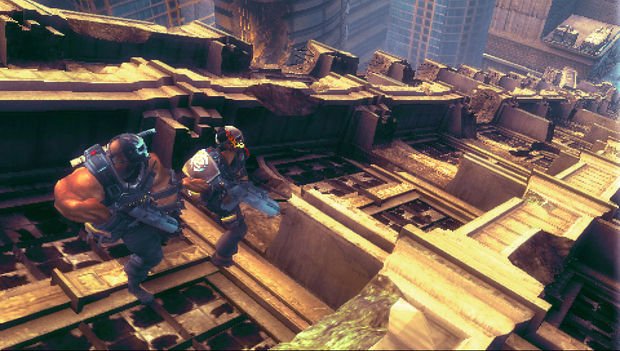 Considering that this is a portable version (sort of…I guess…) of a console title, there’s actually some PSP to PlayStation 3 compatibility. I wasn’t told what this content would be, but unlockable weapons or money exchange wouldn’t be unrealistic guesses.

Army of Two: The 40th Day really does feel like you’re playing a shooter in the sense of The Red Star or Contra. I’m not sure if this is going to be a game that is going to stand up to a high pedigree of other overhead side-scrolling shooter, or if it’s going to be a cheap cash-in. I’m certainly interested in where the development team at Buzz Monkey takes this, and hope they can polish the game in time for its January release.