I met League of Geeks’ Trent Kusters at GDC a few weeks back. We just missed each other at Bitsummit just a week before, but I’m glad we were able to finally meet up as I would have missed seeing a really cool game.

Armello takes the challenge and deck building you’d find in a trading card game and puts it on a game board where movement is something like you’d find in a strategy role-playing game. Four clans, represented by animals, move across the hex game board to conquer the board and take the castle. The story has you representing one of these clan — Rabbit, Bear, Wolf, and Rat — as their hero, working to save the land and take over following the death of the King.

I was shown a stunning cinematic built by League of Geeks to bring players into Armello‘s world. It was of the quality you’d expect to see in a high-profile console RPG, set to some very nice music. You’ll see some of that in the trailer above. 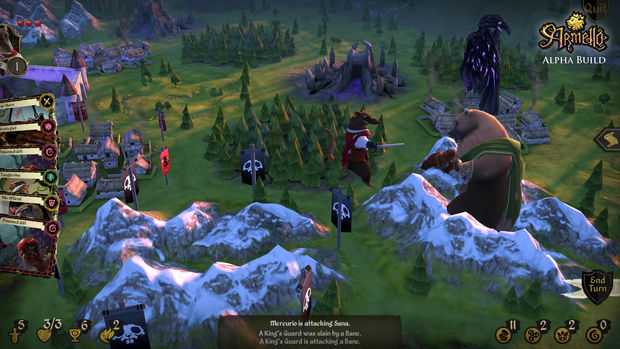 Armello is a digital board game, which means you’ll be rolling virtual dice and moving digital pawns. But movement across its hex game board can lead to encounters, which brings players into the RPG side of things, as does the ability to progress through skill trees and modify loadouts.  Die rolls play into the combat system — they determine how you’ll be able to attack or defend in each encounter. And for the card side, skills and other modifiers can be played from a deck during battle. 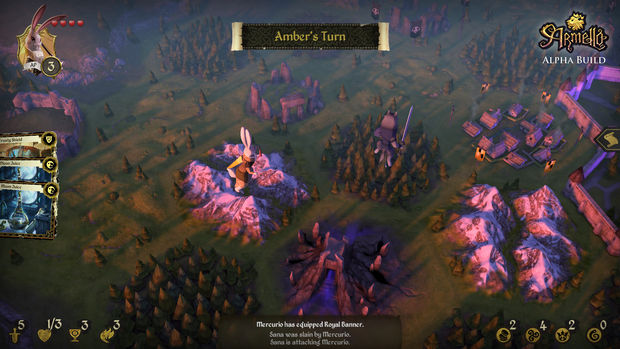 This combo battle system may sound complicated, but it flowed well in the time I spent with an early build. Flicks and taps have you moving through battles in a way that’s easy to understand; it only took a few rounds before I felt like I was getting into Armello‘s groove. While I didn’t have time to delve into the cards’ text and abilities, trying out a few showed that they were at least easy to use in battle. Armello seems to be the type of game that is really easy to get into, but has plenty of depth to keep you tuned in.

A day/night cycle changes strategy, keeping players on their toes. The night brings out the baddies in the forests, while day has the castle guard on defense. Each of the game boards’ hexes are filled with different types of terrain that change with the day cycle, which makes careful navigation important.

It’ll take more time with the game to make a call on how successful League of Geeks has been with their mashup battle system, but I can at least say for now that it mixes together some of my favorite types of games, and that I’m excited to spend some time with it on my own. Or with a friend: Armello supports both local and online multiplayer as well as single player. 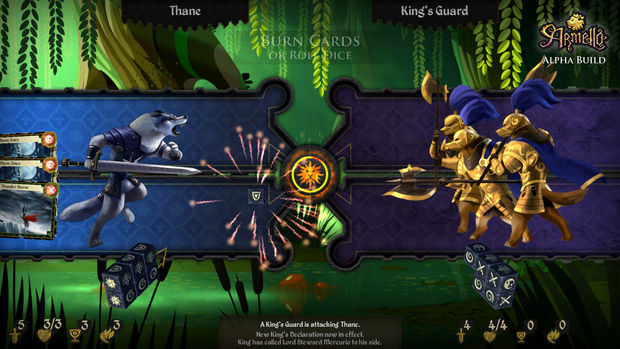 I can also say that Armello is stunning. League of Geeks is a collective of talent, staffed with veterans from popular board and video games. What’s interesting is that they’re all paid according to their level of contribution to the project. Staff working on Armello also worked on games like Darksiders, Bioshock, Puzzle Quest, Pokemon, Warhammer, and more. They’ve created a world and characters that are very easy on the eyes. Expect lush greenery, striking lighting, and detailed animations — this is a very pretty game. And keep in mind that I saw it on an iPad. Imagine how much better the PC version might be.

League of Geeks has launched a Kickstarter campaign to bring their core team in on full-time work, as well as bring the game beyond the planned iPad release to PC, Mac, and Linux. They’re also looking to bring singer-songwriter Lisa Gerrard (Gladiator, Black Hawk Down) on as a second composer, working alongside Michael Allen. They’re hoping to raise $200,000 AUD to get this going.

Armello‘s Kickstarter is live now and will run for 30 days.