Apache: Air Assault is a special beast. While it might be considered a helicopter version of Gaijin Entertainment’s IL-2 Sturmovik: Birds of Prey, a military aerial simulator released in 2009, it is clearly a different approach to aerial combat entirely. Helicopters offer a whole bundle of dynamic options over jet planes and dog fighting, so there has to be a little special attention placed upon the game before it launches November 16.

Does the team behind IL-2 Sturmovik: Birds of Prey (as well as the maligned X-Blades) offer enough to mix things up and bring Apache combat to gamers? There is certainly enough compelling content to make fans of the genre pay attention, and there might be enough to surprise the rest. Hit the jump for my impressions. 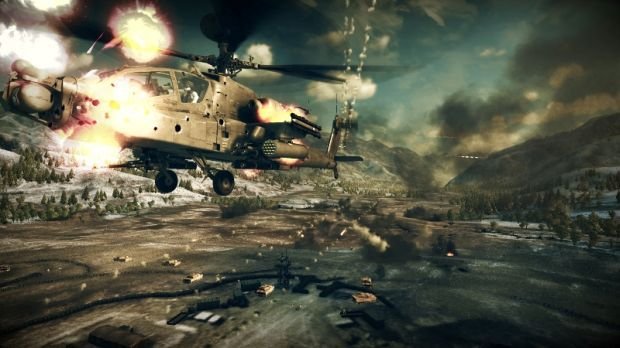 To be clear, usually these sorts of titles appeal to a specific fanbase. While military simulations are always popular, they have a tendency to alienate more casual users by not offering the right sort of experience to appeal to everyone. Thankfully, publisher Activision and Gaijin Entertainment have added variations of difficulty to make the game more enjoyable to different audiences.

For those who would rather get in the chopper and not worry about technical maneuvers or careful flight techniques, there is the Training Mode. While it restricts you from performing certain helicopter actions, it does let players go through the entire campaign without too much difficulty. For a greater challenge, there is Realistic Mode, in which players have only three lives. For players who really love helicopter action, there is finally Veteran Mode, offering only one life and finite ammo.

The helicopters themselves are all Apache brand choppers: the Apache AH-64D Longbow, Apache AH-1, Apache AH-64X Experimental Prototype, MQ-8B Fire Scout, and Mi-35 Hind. While only major helicopter nerds will know the variations by name alone, players will find that each one controls and functions differently. Compared to airplanes, these machines need a wider turning radius, can obviously hover, and generally function in a manner very different from other flight simulators. Helicopters unsurprisingly have special abilities, and Apache pilots will be able to maneuver these machines vertically and nearly upside down, for example. 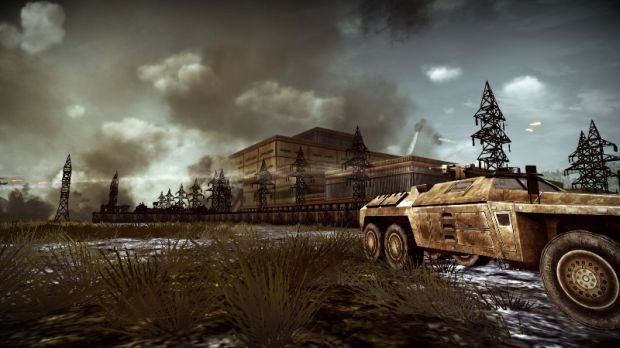 These abilities range from hovering to shooting techniques. Dodging missiles is as easy as dropping altitude, yet to gain speed, the player must dive the Apache downward then swing up, much like a glider. There is a lot of flexibility with these vehicles, and it’s going to require a minor learning curve even for those players who are comfortable with flight simulators. One impressive feature is how the helicopters handle variations of damage, such as flying with a damaged engine at the expense of mobility. However, certain parts, like the rotor blades, cannot be taken out without bad things happening. You get my drift.

While flight simulators don’t exactly offer in-depth plots, Apache: Air Assault tells the story of three different Apache crews working for a fictional UN military organization fighting insurgents across the world. I suppose it’ll get the job done, but let’s admit it, no one will be playing this game for the plot. However, missions themselves are rather dynamic. Objectives will change on the fly, and goals never take more than a few minutes to perform. The first level I was shown, taking place over the plains of Africa, guided us across bluffs and dusty roads while we took out insurgent vehicles. After reducing one insurgent town to rubble (hey, it was filled with no one but guerrilla terrorists, alright?), our Apache had to defend a fellow downed helicopter in a much larger city as insurgents attacked both us and the soldiers on the ground waiting for airlift.

Success in this mission involved locking the Apache into a hover position, then switching over to a shooting mode, alternating between a tactical black-and-white vision cam that highlights enemy vehicles and an infrared cam that highlights enemy soldiers as solid white against a field of black. It looks pretty great, and once the rescue crew showed up, the mission became an escort mission. Within 15 minutes, missions varied from taking out targets, defensive aerial battles, and escort challenges. If the whole game can keep up with the variety, fans of flight simulators will have a lot to like. If not, they’ll appreciate the free flight mode, with a whole set of variables to keep the gameplay dynamic. 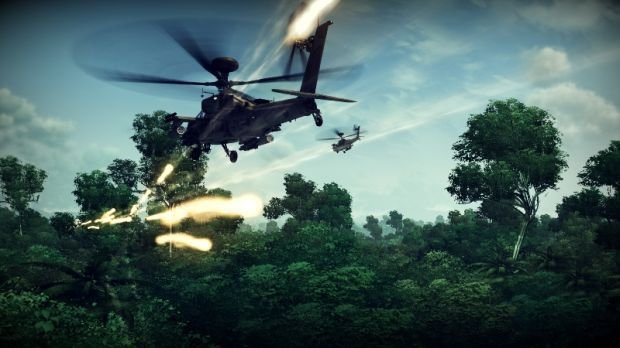 With regards to multiplayer, Gaijin Entertainment is taking a cooperative approach. Apache: Air Assault offers 13 multiplayer-exclusive modes with up to four players acting as a squadron to work through more team-based missions. Though online only, the main campaign can be completed as a co-operative team with one player acting as the pilot and the other as the gunner.

Coming away from the game, it’s clear that fans of air combat games and flight simulators will find a lot to appreciate and enjoy. Clearly, it’s not for everyone, but it’s a niche title for a niche audience. However, there seems to be a strong amount of polish and focus on making a helicopter title that works. It also helps that it is a great looking game with very lush and realistic geography and a solid draw distance. Hopefully, Gaijin Entertainment and Activision can keep things together and release a quality Apache helicopter simulator when Apache: Air Assault launches this November.