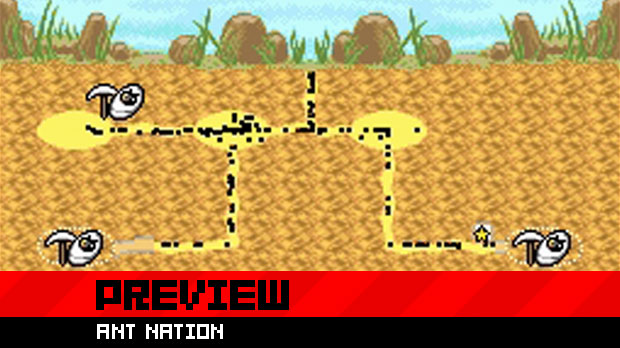 So it was really weird how at Konami Gamer’s Night they had a game that was pretty much nothing but torturing said stupid ants. That’s right. Called Ant Nation, for DS and WiiWare, this is a game where the whole goal is to torture and play with a bunch of ants, and in the DS version, defeat alien bugs. In case you can’t tell, this game is Japanese, and yes, it doesn’t make much sense.

Let’s get this out of the way: Ant Nation is weird. The whole premise of the game, for both versions, is that you are taking care of a colony of ants. From the underground chambers where new ants are born, to the sending out of ants to get sweets, it’s kinda like working with an ant farm.

But the weird part is how the game straight up encourages you to torment the ants for s**ts and giggles. “Oh, neat, I have a rocket launcher!” you say to yourself. “I’m going to shoot my ants!” So then you do, and the ants go flying in the air, and then they make frowny sad faces at you until you feed them a gumball. Then smiley faces pop up, and all is good.

Actually, this description is more appropriate for the WiiWare version of the game. The Konami rep straight up told me: “This version is a toy.” Which is right, because other than screwing around with the ants (stomping them, feeding them doughnuts, killing every last one of them, sending them out to kill other bugs), there doesn’t seem that much to do. I think Konami and developer Kou You Sha might be going for a Noby Noby Boy vibe with this one, as it really seems like they want to evoke the feelings of being a kid who discovered a colony of ants, and wants to shoot them

with lasers.  Cool, I guess.

Now, the Nintendo DS version is probably the version to pay a bit more attention to. This title is more of a “game,” with a plot and everything. Apparently, some alien ants have come and are attacking the ants that you like. Some generic anime scientist has charged you with controlling the ants and making sure that they win. Or something, it was difficult to tell. Anyway, instead of just one type of ant, the DS version has two — worker ants and fighter ants. Fighter ants are good for sending out to kill the alien ladybugs and stuff, and the worker ants are good for getting food and digging chambers for more ants. Pretty simple. Gameplay for the DS version is a lot like an real-time strategy title, sending out ants and making sure they destroy the bad ants.

What’s bizarre is how you have to torture your ants to make them stronger. You can smash them, burn them, poison them or, uh, drown them. As long as you don’t outright kill them, they will build a tolerance to whatever you just abused them with and become stronger against enemies who might try to use such attacks. It’s actually really twisted, but I’m sure there are some people out there who would love to abuse some ants, and turn them into super powerful fighter ants.

As for graphics, the WiiWare version is actually pretty nice. For a WiiWare title, it actually looks quite a bit like Pikmin, and the ants look great. A swarming hoard of ants attacking a spider, or eating a caramel, or even just walking around elicited declarations of disgust from more than one journalist at the event, so good news for people who like the sight of creepy insects.

The DS version (of which all of the images in this preview are taken from), on the other hand, doesn’t look nearly as nice as the WiiWare title. Actually, I would argue that Ant Nation has some of the simplest graphics I have seen on the DS. Colors and textures are very basic, and the ants themselves are pixels. They don’t even look like ants, just black dots moving around. Sure, it won’t make much of an impact on the gameplay, but you’d think the DS could handle a little more.

Konami hasn’t announced pricing for either version of Ant Nation, but I think if they make sure these games are not coming at a premium, there could be reason to pick them up. I’m just not sure most people are interested in ants, except maybe people who like to light ants on fire with a magnifying glass. You sick perverts.