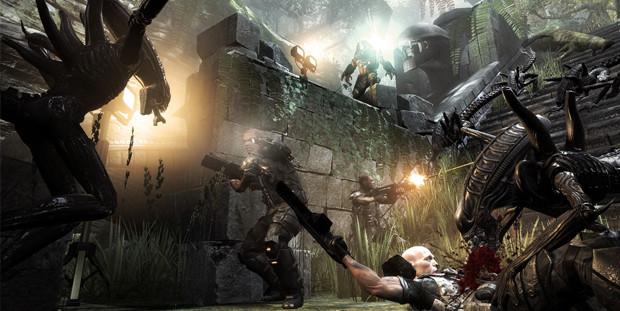 As you’ve probably read in AnusMcPhanus’ blog, Dtoid UK got the chance to play the new Aliens Vs Predator game last week; since the single-player has already been covered I’ll be focusing on the multiplayer.

We got to try a couple of multiplayer modes, the first being “Deathmatch” (no prizes for guessing whats that’s about) it’s a free-for-all pitting you as your chosen character (whether they be alien, predator or marine) against everyone else.

Given that the three species play so differently, you might be quick to assume that this would make the multiplayer unbalanced, but you’d be wrong. The differences between the classes make for a fresh experience, with you having to watch out for Aliens climbing on the walls waiting to bite your head off, Predators jumping around looking to blow your balls off with their laser cannons and marines soldiering on ready to shoot anything that moves.

The second mode, Predator Hunt, places all players as marines except for one, whom is chosen as the Predator. The objective of the Predator is to kill all the marines within their given time limit (with kills giving them more time as Predator) and the marines in turn must kill the Predator, with the one claiming the kill becoming the Predator.

The third game type, Infestation, is similar to Predator Hunt since everyone starts as a marine albeit one person selected to be the Alien. This time anyone killed by the Alien, becomes an Alien and joins their team until one Marine is left to try and survive against the odds being the last man standing.

With these two modes, you quickly learn to stay together, marines that go off on their own looking to be a hero will most likely be killed. While it is possible that they could take out an Alien or Predator on their own (provided they’re skilled enough), it would be no easy feat.

The final game type we got to try out, Survivor Mode is essentially a Horde mode placing 4 players as marines against wave after wave of aliens and of course each wave is stronger than the previous one. I enjoyed this game type the most out of all of them; it started out pretty easy, especially for me since I had the Smart Gun (which some of you may recognise as being from the film Aliens) though as the number of Aliens increased, the game got more tense and I found myself and Dan talking to each other more than ever, warning each other of Aliens we had missed and advising each other about weapon locations and so forth, I really enjoyed it.

When playing as the Marine, weapons such as shotguns or grenades and stim-packs (health packs) are scattered around the level so there’s never really a point where you’ll be completely out of ammo and in desperate need of health. The Marine also has melee attacks, which can be used to get away from close enemies or knock them back (and in the case of the Predator knocking them down), giving you a chance to shoot at them without them hitting you.

As one of the designers informed us, when playing as a Marine you should work out the best spots in the level, and always be aware of your surroundings, since spotting nearby enemies early on will give you the best chance of survival.

It’s easy to forget that as a marine you have access to extra health, so when you’re low you can hit Y (or Triangle or a PS3) and you can restore whatever health you’ve lost if you have enough stim-packs. As a marine, health is divided into blocks, if you lose part of a block of health it regenerates the whole block, but if you lose a whole block it doesn’t which is a bit a bonus.

Playing as the Marine was a good experience, having to watch out for enemies that have completely different abilities meant I couldn’t think of it as a typical FPS. I had to think differently so that I could be one step ahead of them, for example having to look all around my surroundings since the other species can travel in ways that I couldn’t.

The Predator has access to four weapons that scattered around, but can be seen in red from any point in the level. The discs, can be fired and allow you to guide them around as they fly through the air. They also ricochet off walls so if you’ve managed to hit an enemy with one and there’s another nearby, you can try and send the disc tearing through them as well. The plasma caster, a long-range weapon which as you know requires energy to use and thus needs to be charged when it’s out of it. You can tap the right trigger (or R2) to fire a quick blast and can also lock on to enemies to give you better aim. The other two weapons are the spear which is also thrown, and mines that you can plant in the level that explode when someone walks over them.

Since health and certain weapons require energy for the Predator, recharge points are dotted around the level, represented by small hexagons on the screen and recharging takes a few seconds so you’re vulnerable at this point too. Like the marine, the Predator can top up his health in times of need, at the expense of energy.

As the Predator, I made use of cloaking a lot, which gave me a lot of opportunities to grab other players and use a trophy kill on them, apart from players that noticed me on their radar. I found that I didn’t use the different vision modes very often (I mainly stuck to the normal view), but perhaps that’s because I was so focus on sprinting around trying to plan my next execution that they just slipped my mind. I was sure to utilise the jump feature as well, since it was often the best way to escape and allowed me to remain hidden from marines at times.

Blocking proved to be important, regardless of whoever you play as, since many players tried to get close and me and hit me with a quick or hard attack. By blocking an attack from them, I was able to take advantage and hit them with a hard attack.

After landing two or three successful attacks in a row you’ll be presented with a blue prompt, which means if you can perform a kill move, of course which are specific to the Aliens and Predators. You can also get the prompt if you manage to get behind someone. If you’ve seen the “Kill Moves” trailer you’ll have a good idea of what I mean when I say that these kills are quite gruesome, and I assure you the video doesn’t show off some of the worst ones. For example as an Alien you can sink your teeth into the head of a marine, though they don’t show it all. These kills take teabagging to the next level and let you take pride in your murderous ways. However they aren’t always the best option since the kills can take a few seconds and during this time you’re vulnerable to attacks. I recall one occasion where a player was using a kill move on another player, so I went up behind him, waited for him to finish and then did the same thing to him. Oh yes, the circle of life.

I enjoyed playing as the Predator; making use of its arsenal was fun and sprinting with jumping to get around the place, though unusual at first, worked well. I soon learned that as a Predator I should be stealthy and tactical, using the jumps to get to good vantage points for me to spot enemies, rather than rushing in to try and kill whoever I can and then escaping.

The Alien of course has no weapons to find in the level, simply relying on its claws and tail (and other things in trophy kills).

As Dan said, speed is one of the Alien’s biggest advantages. Another advantage to the Alien is the fact that it can climb on practically any surface, be it a wall or a roof.
Unfortunately at first, the combination of these two advantages can make for quite a disadvantage since it’s easy to get disorientated while scaling a wall (especially when under attack), although the game has provided some help by using the crosshair to show the direction the ground is in at all times. With that said, getting around on the ground was very easy as an Alien, but that’s not the way you’ll want to travel in most cases.

The colour of the crosshair reflects whether or not you are currently in shadow, and the size of it reflects whether or not you can jump to the surface it’s on, which are both helpful additions. The Alien has the also has the ability to regenerate health over time so you’ll never have to find a place to recharge or hold a button down, allowing you to simply try and escape when near-death so that you can survive.

Playing as the Alien will mainly involve you dashing around the environment, killing people brutally and then moving on to your next target. It was the only species where I felt charging in and attack as soon as you see a hostile (provided they aren’t in a group) worked.

I found the Alien to be the least enjoyable in multiplayer; though this is most likely because it takes longer for me to get used it to than the other two types.

Though the single-player was enjoyable, I could tell that the main source of enjoyment from the game would come from the multiplayer and I was right. The three species are so varied in gameplay that even if people find one to be their favourite, they’ll still go back to the other two, since playing as the different species gives you a different experience in the multiplayer. There are a lot of game types to appeal to all, and it is surprisingly balanced; though it waits to be seen if that will change after the game is released.

As a multiplayer experience, it might not be the most clean and polished, but it definitely offers something different to most FPS’s out there, and what it does offer it does well.