Eleven years ago, American McGee’s Alice saw an accidental fire consume Alice’s home in Victorian London, along with her family. Wracked with survivor’s guilt, Alice attempted to commit suicide and was committed to the Rutledge Asylum. While institutionalized there, she revisited the Wonderland of her childhood, which had decayed under the iron fist of the Queen of Hearts. By destroying the Queen — the physical manifestation of her own insanity — Alice restored Wonderland to its original splendor and was declared stable enough to venture out into the real world.

But Alice isn’t ready to handle life on her own. Eleven years after leaving Rutledge, she remains under the care of a London psychiatrist, and her past continues to haunt her. Her madness has returned, and she must make her way through Wonderland once again to heal the world (and by extension, herself). This time, though, there’s an insidious wrinkle: perhaps the fire that started it all didn’t start by accident. 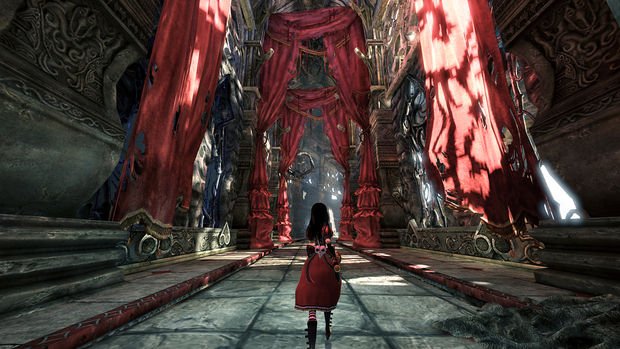 The original Alice was the first M-rated game that EA published, and while the ESRB hasn’t rated its sequel yet, I’d be shocked if Madness Returns received anything other than a “Mature” tag. If you’ve seen any of the trailers for this game, then you know that it presents a twisted vision of Wonderland, which has suffered as Alice’s inner demons have tortured her. According to Joel Wade, a producer on the game at EA, the team at Shanghai-based studio Spicy Horse went for an art style that would “make it feel like you [were] stepping into a painting.” The look reminded me of another EA Partners title, Brütal Legend, but while the games share a ruddy color palette at points, the theme here is less metal than it is macabre.

Alice alternates between Wonderland, the warped world within her mind, and her miserable existence in late-nineteenth-century London. In Madness Returns, Wonderland isn’t just a refuge to which she can escape from her depressing life; Wade repeatedly referred to it as a “tool” that Alice uses to explore her memories, with the ultimate goal of uncovering the truth behind her family’s death. Each memory Alice comes across will offer clues to help her solve the mystery. They’re the carrots on the proverbial stick, the rewards attained for completing segments of the game. The memories vary in scope: some are mere snippets of voice-over dialogue, while others are full-on Victorian-puppet-theatre-esque productions. 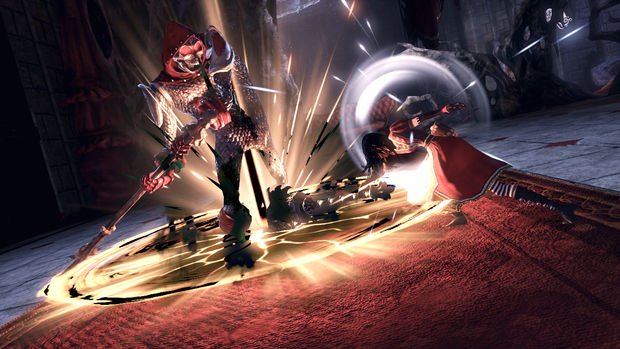 Wonderland is a representation of Alice’s own mind; as she progresses through it, the environment changes to reflect her deepening psychosis. The early phases of the game are bursting with vibrant hues, but the area that I saw, Queensland, comes much later; it’s almost as dark as one of the circles of Hell, as envisioned by Visceral Games in Dante’s Inferno. Indeed, Wade explained that the Spicy Horse artists endeavored to give each of the provinces in Wonderland its own unique theme. In Queensland, an ominous sky hangs over a crumbling world, and Alice herself has changed: she previously wore a blue-and-white dress, but now sports a crimson one adorned with the suits from playing cards — remember, the Queen of Hearts used to rule over this region.

Madness Returns is a third-person action game with some platforming elements and puzzles. My demo began with Alice using a shrink flower. These items offer currency that can be used to upgrade weapons, but as you may have guessed, they also shrink Alice while revealing hidden platforms and graffiti left by Wonderland’s insane children. In this case, the crazy kids had scrawled the phrase “this way,” along with an arrow, on the wall, directing Alice’s attention toward floating, moving platforms. It was at this point that I saw Alice use one of her weapons for the first time.

Alice has four weapons at her disposal — they’re “Wonder-fied versions,” said Wade, of everyday objects. Her famed Vorpal Blade, a kitchen knife in real life, is back for quick slashing action, and her old Hobby Horse functions as a mace. The other two weapons are used for ranged attacks: the Teapot Cannon, which lobs explosive blasts of, uh, tea; and the Pepper Grinder, which is essentially a crank-operated machine gun. While standing on a platform, Alice fired her Teapot Cannon at a broken section of wall, blowing it away to reveal one of the game’s collectibles, a bottle, ensconced in an alcove. 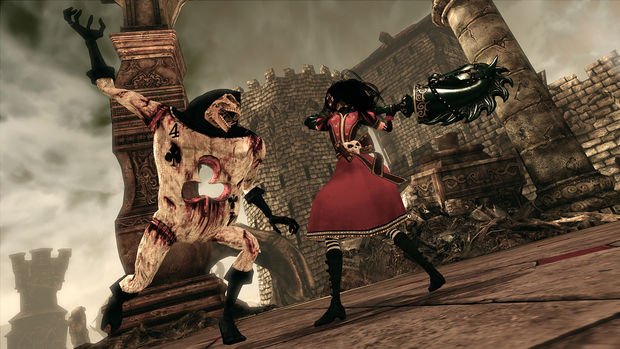 Eventually, Alice made it across the chasm and encountered a combat scenario. Each particular enemy has its own vulnerability, requiring Alice to mix up her weapon usage in order to be effective. Defensive tactics are important, too — Alice can dodge by sliding sideways, exploding into a cloud of brilliant azure butterflies as she does so, and she can also whip out her umbrella and use it to reflect projectiles. If things are getting too hairy, she can drop a Clockwork Rabbit, which draws enemies to it (or at least draws their attention) like pipe bombs in Left 4 Dead. It’s not just a diversionary tactic, though; it functions as a time bomb, and Alice can detonate it at her leisure or let it explode on its own.

Inventive, creepy enemy design is notable in Madness Returns. The creatures I saw weren’t particularly clever or challenging in combat, but they certainly looked intimidating — one clubs-themed beast with a skull for a head had a clover-shaped hole in his chest. After dispatching the enemies before her, Alice entered a gazebo to collect a memory, which consisted of a voice-over reminding her how much she loves food — and specifically, cake. Once she completed the next combat arena, Alice pushed forward, only to encounter a character called the Executioner, the Queen’s henchman; he had been harassing her for a while.

Here, Alice ran from the fearsome scythe-wielding thug down a corridor toward the camera, until she reached a clearing with a cake sitting on a table. Its icing read, “Eat Me,” so Alice dug in with both hands. Just as Alice can use flowers to shrink herself, she can use cake to grow into a giant version of herself. The Executioner, faced with Alice towering over him, quivered in fear and dropped his scythe; Alice finally got rid of him with a swift stomp, signaling the end of the demo. 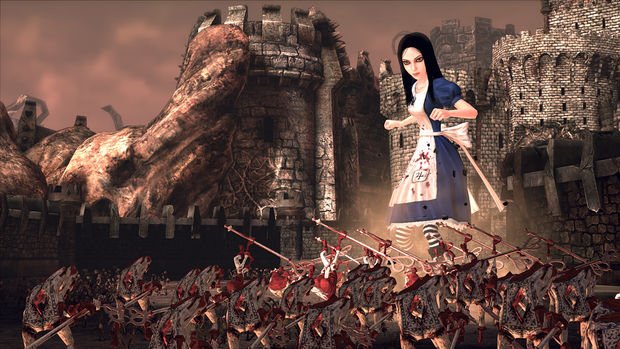 Alice’s insanity will affect her quest for the truth, Wade told me. When I asked him if the game would use psychological elements to mess with players’ minds, he explained that at some point, the line between reality and Wonderland will begin to blur. The story comes from R.J. Berg, who also executive-produced and wrote the first Alice; it’s an original tale, but draws on Lewis Carroll’s original Alice in Wonderland books. Wade promised that the narrative is smart, and that it will get gamers thinking. If Spicy Horse can manage to do that while keeping the environment and combat varied, American McGee’s Alice may have a triumphant return, indeed.

[Editor’s note: You can watch the same gameplay demo that I saw, online (part 1, part 2). –Samit]