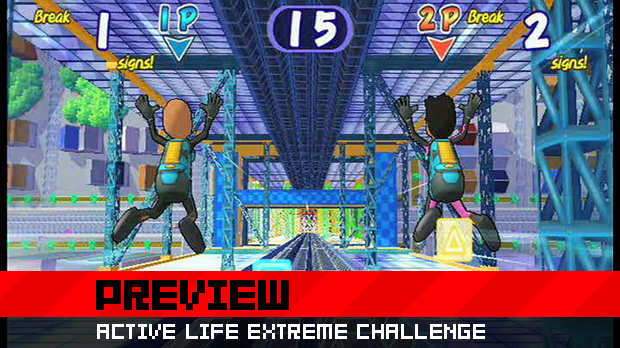 is another sports compilation game for the Wii. Unlike most other sports collection games though, Active Life comes packed with a DDR style mat and requires players to use the mat and Wiimote together to play the games. The games will vary in requirement based on what the player needs to do, from sitting on the mat, using their hands on the mat, standing on the mat while holding the Wiimote and so on. The game is designed so the entire body is used.

There will be over 15 games in total ranging from street luge, skating, kite surfing, base jumping, double dutch, BMX tricking, skateboarding, rock climbing and more. With the street luge game, players will need to sit on the Active Life mat in order to control the luge. With the BMX tricking game, players need to jump on the mat and move the Wiimote around to go along with the on screen prompts, Dance Dance Revolution style.

The game will support up to two-players and the movements will vary depending on the game. For double dutch, both players need to use the mat. For rock climbing, one player uses the mat to climb and the other player uses the Wiimote to throw rocks down towards their friend climbing the rock wall.

I played the BMX tricking game briefly and it was interesting. It really got me moving and I was even sweating a little after I was done.

If you’re into these types of mini-game style games for the Wii, then Active Life is a good one to get. The price might be the only thing that will hold most people back. It’s going for $59.99 as it’s packed with the mat. The mat is designed only for the Active Life games (it will work with the original and the original mat will work with this new one too) and the mat might be too heavy of an investment for some.

Here’s a trailer for Active Life Extreme Challenge where a family is having WAY too much fun playing the game. It’s as if there are guns being pointed at them off screen and the director is threatening their lives if they don’t have tons of fun. That poor family.