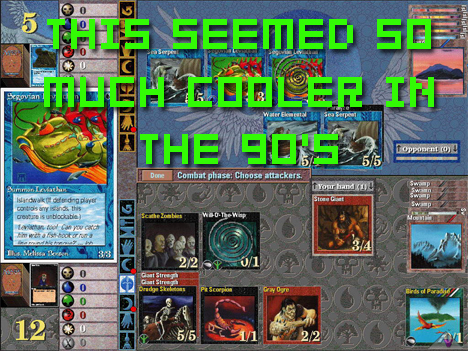 Oh, Wizards of the Coast. How much of my childhood allowance did you end up taking after I became enamored with your tiny pieces of rectangular cardboard adorned with pretty fantasy pictures? It was quite the princely sum, to be sure (at least for a kid in elementary school), but the hours spent summoning guys whose names ended with en-Kor and casting Lighting Bolts (three damage for one mana!) seemed totally worth it at the time.

Now it seems that the Hasbro owned card-makers and developer Stainless Games are set to take the sort-of-like-real-money-but-not-quite Microsoft Points from people that are drawn to collectible card games all over again — in the form of their newly announced Xbox Live Arcade game Magic: The Gathering – Duels of the Plainswalkers.

Although most of you probably don’t recognize it, that title was used before for a Magic game released on the PC back in 1998. Although the original Duels of the Plainswalkers saw players using their cards to defend a world from an invading Plainswalker and the local wizards he had corrupted, this new title will set players in the shoes of one of the dimension-hopping immortals that can use their memories to create magical effects.

Computer controlled opponents will of course be on hand to provide an immediate challenge, but the real draw (get it? draw? cause you draw the cards from the deck … ) will be in playing against other people over Xbox Live. Although no multiplayer modes have been specifically mentioned yet, I would expect to see to some sort of ranked, unranked, and tournament game types. Yep, we collectable card players sure do love us some tournaments.

Is this a game you might consider picking up? Do you already have enough real Magic cards lying in a box somewhere to consider buying virtual ones?

SEATTLE, WA.—August 27, 2008 — Wizards of the Coast, Inc. a subsidiary of Hasbro, Inc. (NYSE: HAS) and a leader in entertaining the lifestyle gamer today announced the unveiling of Magic: The Gathering – Duels of the Planeswalkers, a video game extension of the successful Magic: The Gathering franchise for Xbox LIVE® Arcade. Scheduled for official release in Spring 2009, this year’s Penny Arcade Expo (PAX) attendees can demo the game at Wizards of the Coast’s booth (No. 1132) during the show taking place at the Washington State Convention and Trade Center in Seattle August 29-31.

“We’re excited to bring the Magic brand to new platforms and give gamers new ways to experience this great property,” said Jared Gustafson, Brand Director for Magic: The Gathering at Wizards of the Coast. “The game successfully brings Magic’s inherent strategic game play to the Xbox LIVE community.

Developed by Stainless Games, Ltd., Duels of the Planeswalkers lets players simulate the Magic: The Gathering Trading Card Game through an interactive digital experience. Players take on the role of a Planeswalker, a powerful wizard who battles others for glory, knowledge and conquest. Each Planeswalker has an arsenal of spells and creatures showcased by virtual cards. Players can either choose to battle against the computer or compete online against real life opponents using Microsoft’s Xbox LIVE service offerings. With endless game play scenarios, including multiplayer game mode, Duels of the Planeswalkers offers an unrivaled depth in which each game is different from the last.