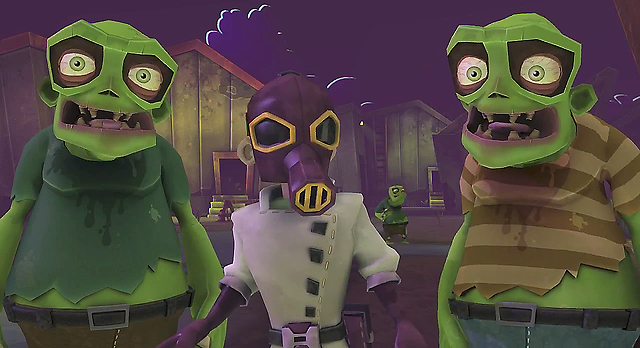 Will the student finally become the master?

Back in 2009, the small Canada-based Frima Studio developed a quirky little title named Zombie Tycoon where you assumed the role of mad scientist Brainhov and undertook his quest to rule the world with formula Z-fueled zombies. The developer is back with Zombie Tycoon 2: Brainhov’s Revenge for PS3 and PS Vita on April 30, 2013.

This time around, Brainhov’s former apprentice, Orville Tycoon, has now turned on his master and plans to wage war to claim the world for himself. You can choose whose side to be on, with each one having different characteristics. Brainhov’s zombies are fast, frantic, and ravenous, whilst Orville’s are slow and bumbling, but more powerful.

Frima promises a decent single-player campaign, though only small details of the multiplayer were divulged at this moment. There’s a a one-on-one deathmatch to destroy the opponent’s tower, with the ability to control two zombie packs and a monster unit. Leveling up and controlling buildings will also be a feature in the game. Finally it’s another Cross Play, Cross Buy title, which means you can invade PS3 & Vita users if you so wish.