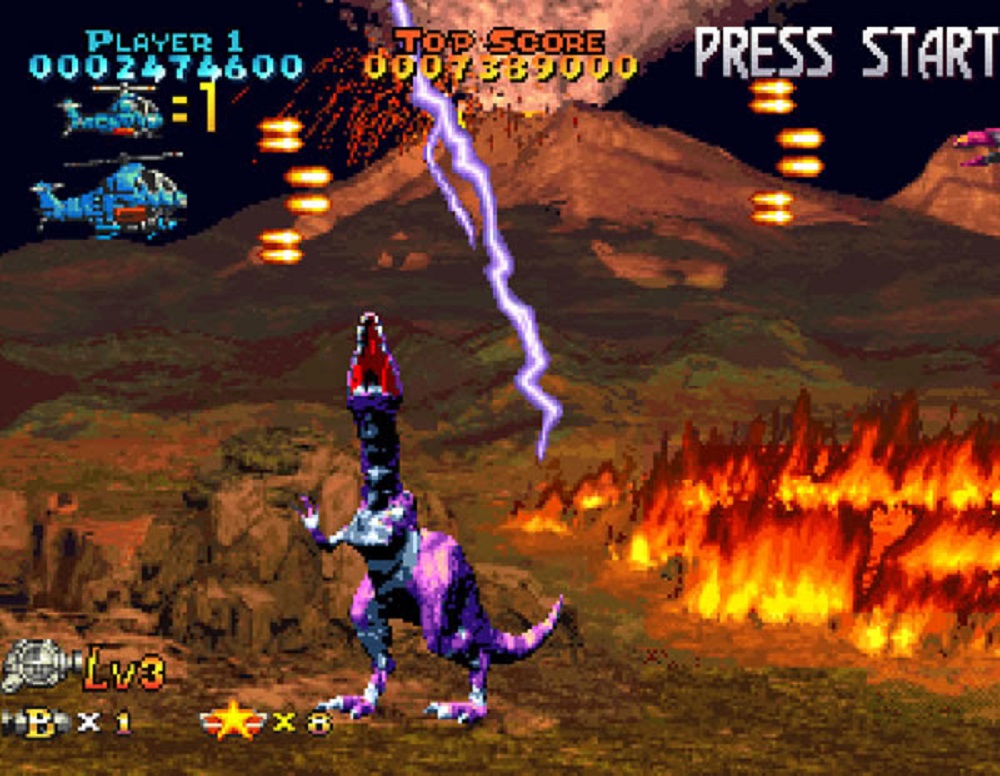 Thanks to the retro-gaming fans over at Hamster, Arcade fans have a chance to revisit one of the oddest shmups of the late ’90s, as SNK’s Prehistoric Isle 2 is now available to download on PS4, Xbox One and Nintendo Switch.

Released in 1999, somewhat late for the big dinosaur craze of the decade, Prehistoric Isle 2 sounds like the world’s most obvious Jurassic Park rip-off, but, surprisingly, it is the sequel to Prehistoric Isle in 1930, a game that was released in 1989, a year before Michael Crichton’s best-seller hit the presses.

Prehistoric Isle 2 is a horizontally-scrolling shmup set in a post-war world in which dinosaurs are running rampant. Rather than put together a scientific solution to this global issue, the government decides to just send two guys in helicopters to deal with the entire outbreak, destroying the prehistoric menace and rescuing trapped civilians.
Although a fairly bog-standard affair, featuring the usual air-to-air-to-ground based shmup action, along with the obligatory power-ups, Prehistoric Isle 2 featured rendered 3D models for its enemies, rather than the 2D sprites typified by the genre, giving the game a unique looks and smooth animation. It’s certainly an interesting curio, but nothing to write home about, gameplay-wise.

Prehistoric Isle 2 is available to download in Japan on PS4, and worldwide on Xbox One and Nintendo Switch, priced at $8.