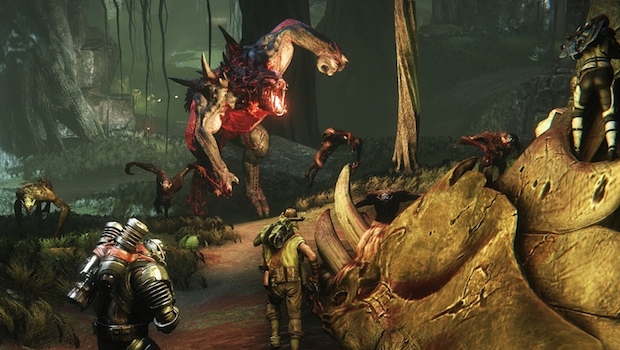 Today 2K Games and Turtle Rock Studios confirmed a bonus pre-purchase incentive for Evolve on Xbox One. If you pre-purchase the game before or during the Open Beta on Thursday, January 15, you’ll be able to immediately play as the Wraith monster and four late-game hunters, as opposed to the Kraken, Goliath, and the first two levels of hunters. This contradicts previous statements from Turtle Rock claiming the Wraith would not appear in the beta.

Both the Wraith and the late-game hunters — Parnell (Assault), Abe (Trapper), Caira (Medic), and Cabot (Support) — will be part of Evolve‘s unlock system in the final release, but pre-purchasing the game will allow you to use them from the second you start playing.

Pre-purchasing is separate from pre-ordering; a digital pre-purchase happens on a console’s digital storefront and costs the full price of the game, as opposed to a $5 or $10 down payment at a physical retailer like GameStop or Target. Evolve is currently unavailable on the Xbox One’s games store, but 2K told Polygon that it will announce digital pre-purchase plans “soon.”

Xbox One Open Beta: Play As Wraith, The Newest Hunters [Evolve]
Evolve lets you skip grinding if you pre-purchase digitally on Xbox One [Polygon]