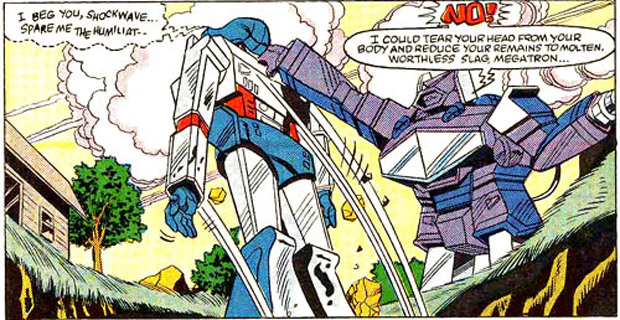 I desperately want Transformers: War for Cybertron to live up to its potential. Who doesn’t? Admittedly, that might be asking too much — there are so many ways it can go right, and even more little things that can go wrong with this game.

I remain hopeful, mostly because it isn’t directly attached to any movie. Also, the debut trailer was pretty badass. Lastly, and this part is important, there’s been no talk of throwing people into the equation. We dig Transformers for the ridiculously awesome robots, not the silly humans.

Even if War for Cybertron does win this uphill battle, there’s another thing to worry about: the pre-order bonuses. Right now, GameStop is exclusively offering up Shockwave for use in the “Escalation” multiplayer mode with each game reservation. Oddly specific, huh?

It’s one thing to have multiple retailer-exclusive in-game objects that are just cosmetic, or even when it’s a bunch of different weapons. But when we’re talking about potentially missing out on playable Transformers, and having to ultimately decide which ones we prefer above all others, then it’s getting cruel.

Don’t make me relive the childhood experience of choosing which Transformer got to go on my Christmas wishlist. I’ve tried so hard to block out those painful memories.