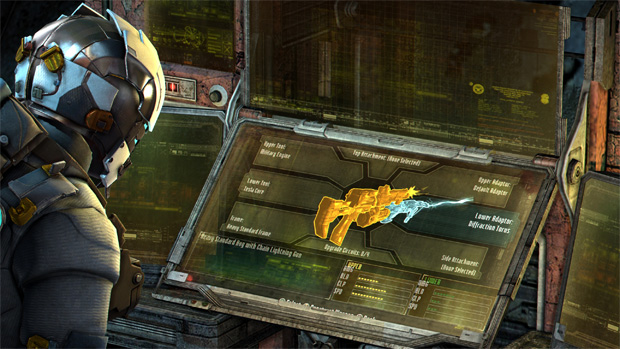 Dead Space 3 is almost on the horizon now, which means its time for Electronic Arts (in partnership with retailers) to try and get you to confirm your need to play with pre-order inducements. If you were to make an order for Dead Space 3 from the good people at your local GameStop, they will supply you with a code for a submachine gun, the EG-900. Neat, right?

Amazon gets a weapon called the “Enervator,” which (according to the press release), “delivers a precision blast causing instantaneous electrocution and molecular destabilization in the target.” Nevermind that to “enervate” something means to drain it of strength as opposed to pumping it full. Just put that out of your pretty little head. We’re going to blow some f*ckers up!

I mean, really this doesn’t even seem like a choice to me. I feel bad for the poor schmuck at GameStop who said that the SMG seemed like a good idea. Both offers are available now and Dead Space 3 itself releases on February 5 in North America, followed three days later by Europe on the 8th.