Sure, you’ll be able to pop the Rock Band 3 disc in and start rocking using all of your existing instruments. But if you want to really take advantage of what the game has to offer — updated support for a keyboard peripheral and all of the game’s ‘Pro’ modes — you’ll want to turn to Mad Catz.

The accessory manufacturer has partnered with MTV Games and Harmonix to deliver a full suite of new items, including the highly-touted keyboard controller. Gamers will be able to purchase the keyboard, a fully functional MIDI keyboard with a two-octave range for $79.99; you can also purchase a bundle for $129.99.

For more details (straight from Mad Catz) on this and the other peripherals (including updated drum cymbals, guitars, and a MIDI adapter) after the jump. 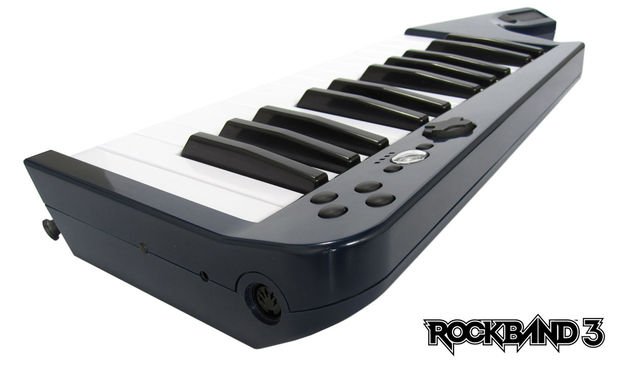 Designed for use exclusively with Rock Band 3, the Wireless Keyboard Controller has been crafted to resemble classic professional keyboards and is playable on a secure flat surface or while strapped over the player’s shoulder.  Empowering gamers to take their enjoyment of rhythm music gaming to the next level, the Wireless Keyboard Controller also functions as a MIDI keyboard, boasting a two-octave (C3 to C5) range and non-weighted, velocity-sensitive key bed allowing gamers to take full advantage of the Rock Band Pro mode.  The MIDI output connector provides compatibility with MIDI software sequencers and hardware devices while standard console-specific gaming controller buttons deliver seamless console integration and navigation of the game menus.  In addition to playing the keyboard parts of Rock Band 3, the Wireless Keyboard Controller can also be used to play the lead guitar or bass parts of the game.  An optional Keyboard Stand will be sold separately and is expected to be available alongside the launch of Rock Band 3.

Ideal for gamers who wish to enjoy the holiday seasons hottest music title and latest instrument together, the bundle includes both the Rock Band 3 game and Wireless Keyboard Controller, representing a convenient and excellent value purchase for music fans everywhere. 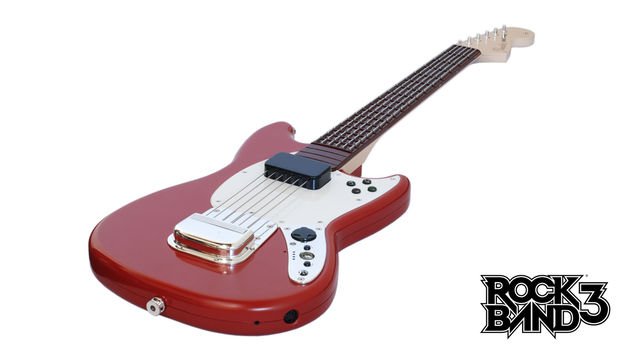 Introducing a new level of realism to the rhythm music genre, the Wireless Fender Mustang PRO-Guitar Controller is designed for use exclusively with Rock Band 3, allowing gamers to accurately replicate a real guitar when playing Rock Band Pro mode in the game.  Featuring 17 frets along a button-based neck, the Fender Mustang PRO-Guitar includes a 6-string strumming area which allows for discrete picking of each string and a touch-sensitive string box which allows players to mute or ‘cut-off’ notes when pressed.  In addition, the Fender Mustang PRO-Guitar operates as a fully functional MIDI guitar, with the MIDI output connector providing compatibility with MIDI software sequencers and hardware devices while standard console-specific gaming controller buttons deliver seamless console integration and navigation of the game menus.  The Fender Mustang PRO-Guitar allows for left or right handed use and can also be used to play either lead or bass parts of the game in Rock Band Pro and standard game modes. 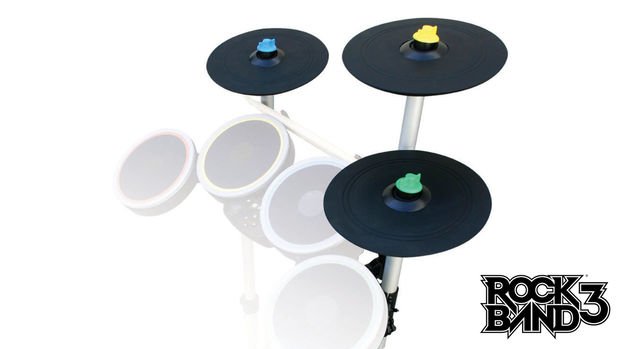 Designed for use exclusively with Rock Band 3, the MIDI PRO-Adapter allows musicians to use their real MIDI keyboards or MIDI drum sets to play Rock Band 3.  Plugging directly into the console via USB, the MIDI PRO-Adapter works as an interface between the console and MIDI instrument, converting the MIDI messages into console controller data which the game translates into on screen action.  The MIDI PRO-Adapter features a velocity sensitive adjustment for MIDI drums designed to reduce cross-talk during play.  A full D-Pad and standard gaming controller buttons are located on the PRO-Adapter to deliver seamless console integration and navigation of the game menus.  Ships with a removable clip, allowing MIDI PRO-Adapter to be attached to a belt, or rest on a table top or similar flat surface.