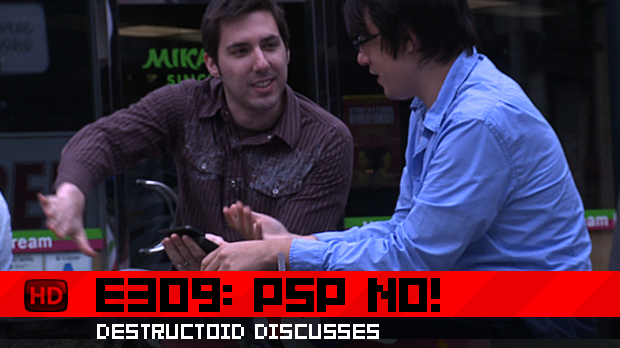 When we first saw the supposed PSP Go leaked images, we were quick to discount them as a fabrications, saying that there’s no way that Sony would have released something that looks like that. And then we saw the alleged leaked Qore video, which forced us to realize that perhaps the images were real. Before we could fully express our feelings, we decided to make it the next topic for our Destructoid Discusses feature.

Nick Chester, Colette Bennett, Jim Sterling and I take a break from our pre-E3 planning day to sit down and talk about this “leak.” We address our feelings on the design of the device, as well as the lack of a second analog nub; I think a lot of us were hoping that the new PSP would look more like some of the slick fan concepts going around. We also touched on the possibilities of downloadable content and how the device launch might affect the currently available PSP and its market.

I’m being nice. Seriously, the thing looks like they raped a Sony Mylo with an ugly gun.

What do you think of the new design? Do you think our minds might change once we get a our hands on this device? Actually, do you need another PSP? Hit the jump for moving picture goodness!