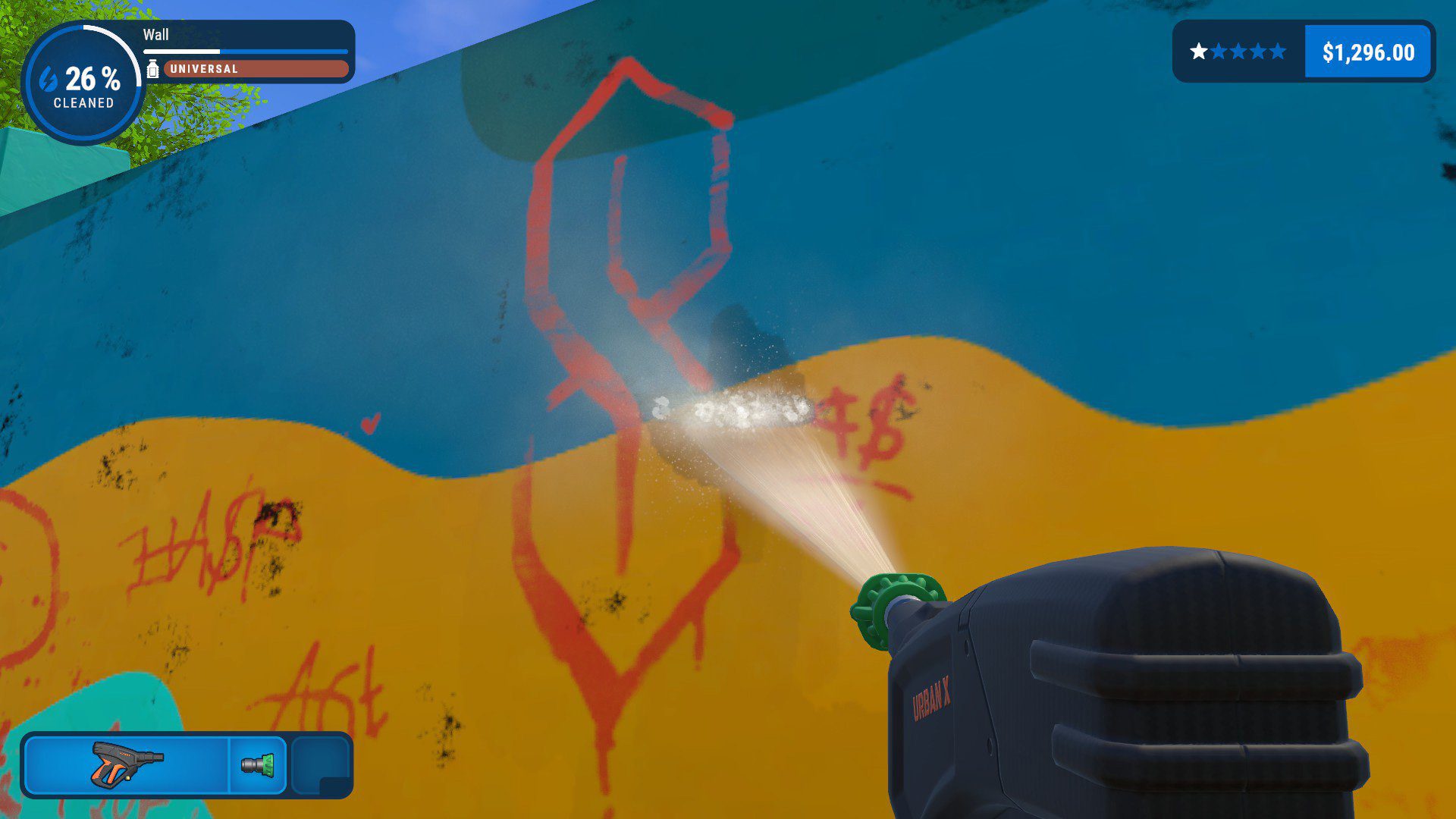 Ahem. I’ve spent over 10 hours power washing houses, cars, and even a skate park… inside a simulation PC game. I know what you’re thinking — you’ve got that trademark Simpsons “Yard Work Simulator” image ready to go — and I don’t disagree. But for what it is, this game is surprisingly well-thought-out.

I wouldn’t go so far as to call it “fun,” but I’m enjoying this comfortingly mundane experience. 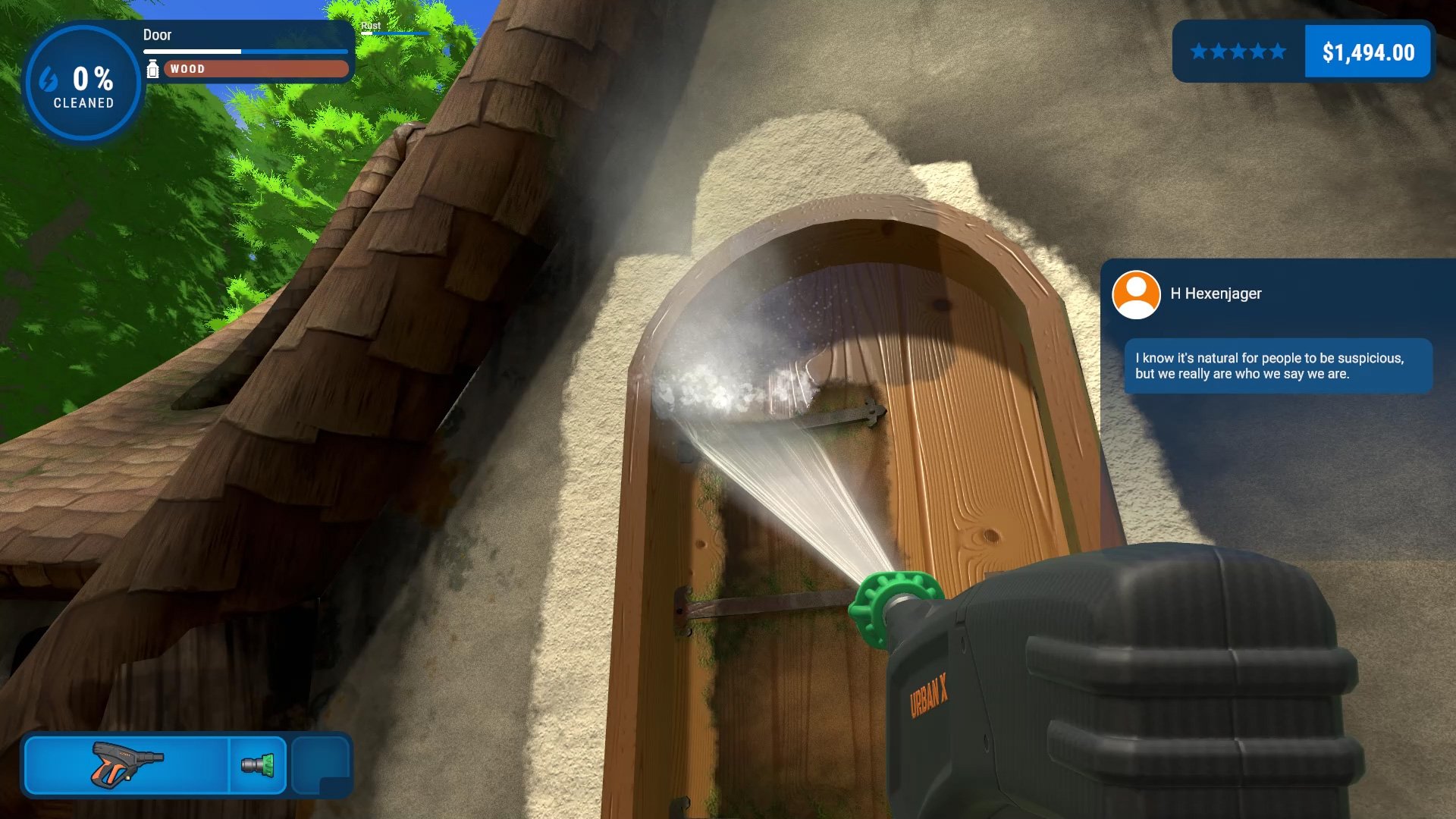 I’ll keep this Early Access review fairly short. There are only a few main points to make, and you likely already know in your heart if this is your sort of game or not. I thought it would be for me, and it is.

Here’s the thing: PowerWash Simulator doesn’t feel like a low-effort toss-it-on-Steam-and-see-if-it-sticks approach to game design that we’ve seen in other PC sims lately. Even in Early Access, it’s robust.

In the main Career mode, you’ll start with a basic power washer and, as you clean out each level, you’ll earn more cash that can be put toward better tools and alternate attachments, though they’re honestly more nice-to-haves than mandatory purchases. You can hold down your mouse to spray, toggle the spray to give your finger a rest, rotate the nozzle, and even hit a key to brightly highlight easy-to-miss dirty spots. There’s also controller support, and it works well. I swap back and forth for comfort.

Mechanically, PowerWash Simulator looks and mostly runs as it should, there are low-key story moments with pop-up messages (some of which are chuckle-worthy), the cleanable surfaces are pretty varied, and the power washing — the most important bit — feels right. Some surfaces are a breeze to near-instantly clean, some are so gunked up or rusty that you’ll need a very powerful nozzle to chip away at them for a few seconds, and many fall somewhere in the middle, allowing flexibility.

If you’ve never used a real power washer but you liked scrubbing the muck away in Super Mario Sunshine, you may feel at home in PowerWash Simulator. These levels are hilariously caked in grime.

The best part about this game is that the surface cleaning isn’t all or nothing — you’ll make progress on individual nitty-gritty parts of the machine or house or whatever you’re cleaning, and you can even bounce between levels as you set fit (once you unlock more). As you power wash a walkway, or trim, or a window, you’ll fill up a progress bar that feeds into the level’s overall completion. In other words, you’re constantly getting small pats on the back rather than just one big loving tap at the end.

In my 10 hours of playtime, I’ve tried a dozen levels, two of which I’m still powering through. Some — like a motorcycle with a side car — are shorter jobs. Others, like a fire station, are quite the undertaking. I’m not sure how much more content is left to go given that I just unlocked the third and final power washer, but assuming I’m near the end, this feels appropriate. You can also replay levels in Free Play. 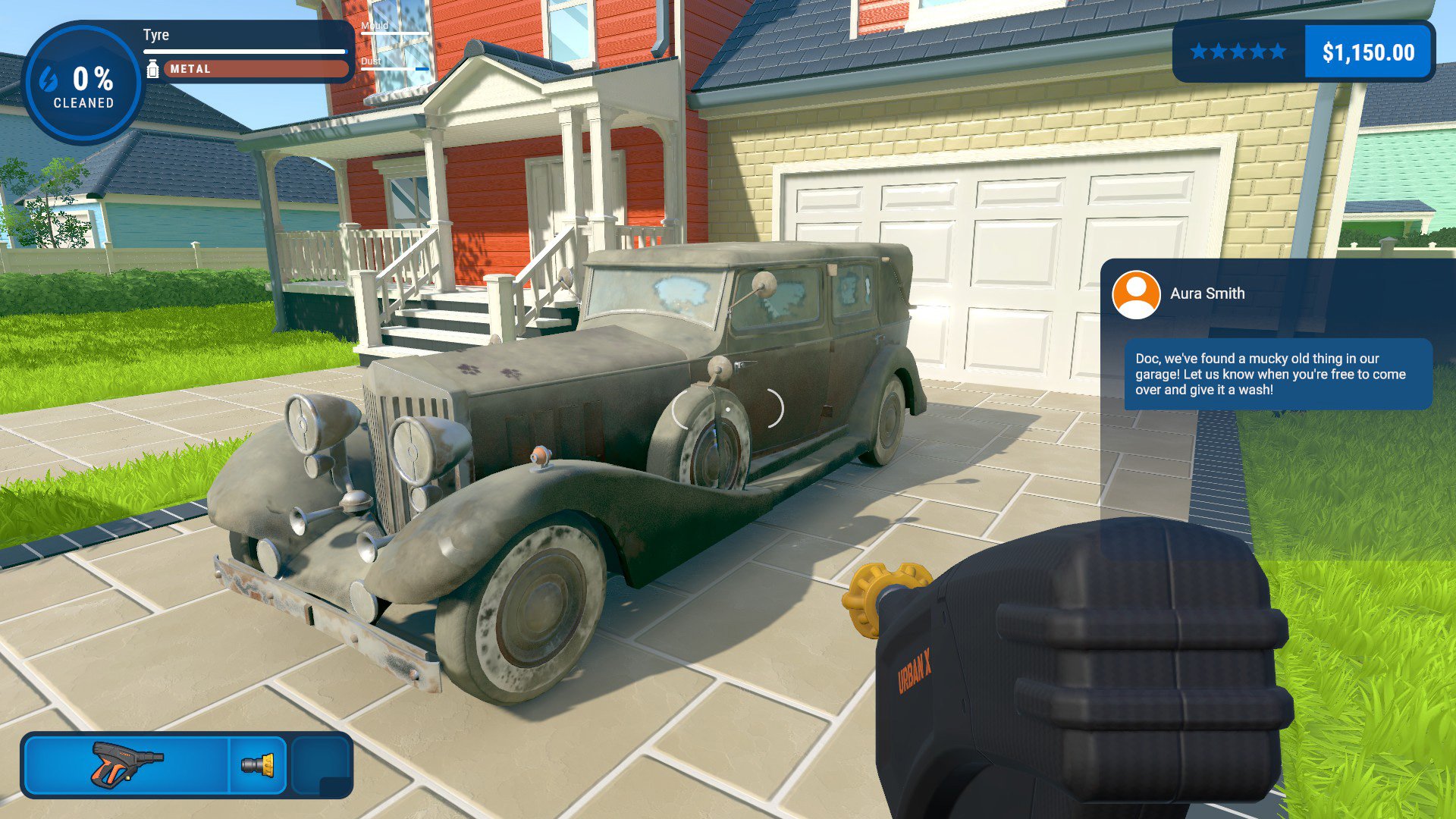 If I have any complaints yet, it’s that the game has hitched a handful of times on my PC, and sometimes, it can be a pain to finish cleaning that last 1% of a particular object, even with the “visual assist” highlight ability. It’ll seem like you almost need to crawl on the ground to get the right angle, especially for complex objects like vehicles with lots of nooks and crannies. Eventually, it kinda just works. That said, I do appreciate having a menu with a full list of every surface and what’s left to clean.

I’m also not the biggest fan of the way ladders feel in general. You can place your ladder in several predetermined spots, which is perfectly fine, but I’ve had my character slip off the ladder for no good reason, and it’s unwieldy to power wash while you’re standing on a ladder. The same slipping issue has also come up for me on inclines — say, a roof, or halfway up a ramp in a skate park. It’s not super frustrating, and it doesn’t come up all that often, but it could be a bit smoother.

If FuturLab can continue adding creative levels, further flesh out the Career mode, and implement its planned multiplayer and “experimental” mechanics, PowerWash Simulator will be in a great place. As is, it’s definitely good enough to recommend. Not so much “oddly satisfying” as it is “satisfying, period.”

I do wish there was a VR mode, though. That would genuinely be amazing.