Headed for the bunker?

Powerstar Golf is a launch title for Xbox One. It’s an arcade golf title, but it’s no Hot Shots Golf. On the surface it seems like it’s par for the arcade-y golf course, but a few issues have it stuck in the sand traps.

If you were to pull out the big-headed/small-bodied Japanese characters of Hot Shots Golf and replace them with taller, comic book-ish characters, you’d have something that looks a lot like Powerstar. The courses are sharp and clean, and the HUD is exactly as you’d expect. Its environments look nice, though there’s nothing about it that screams next gen.

The control scheme and shot mechanic are also pretty similar to Hot Shots. It uses the three button press swing — once to start the swing, again to set the power, and one more time to set accuracy. Even course navigation and the putting grid are right in line with what you’d see from Clap Hanz’s work. 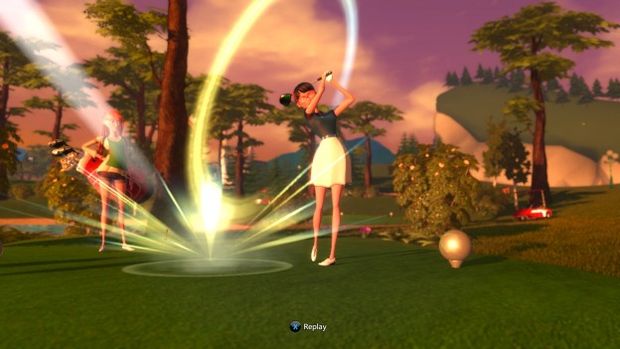 What’s different here is that Powerstar has special abilities assigned to each character. A character named Frank has a super-powered swing. Another, Reiko, has a magnetic shot that helps players close the gap in shots that were almost there. These are limited-use abilities, so you’ll have to be careful to use them when you really need them.

So what’s the problem with Powerstar Golf, then? There seems to be a lack of polish, which has it falling flat in a lot of areas. Take the shot gauge, for example. The small bar you follow with your eyes to know when to press the button to set shot power and accuracy is so small and thin that it’s almost unbelievable. It looked about as thick as the letter “I” on the television I used to test this game. Worse, on the bar’s return trip, after setting shot power, the bar moves on a colored field that makes it even more difficult to see. It’s pretty bad when the most important part of the shot gauge is incredibly difficult to track due to its size and color. 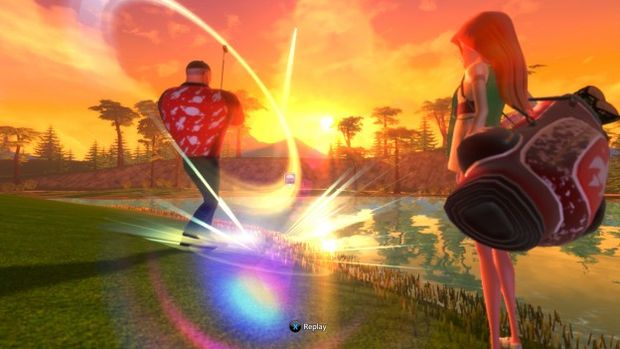 The user interface has other issues along the same lines. The UI font is so small that I had to put my face up to the screen to read some messages. Again, very important messages, like shot distances, are so small that I didn’t want to bother reading them.

They can improve on the presentation pretty easily, but I think the feel of gameplay needs even more work. While setting the shot landing zone works nicely (done with the analog sticks), camera movement and other related controls feel a bit rough. More importantly, the swing mechanic itself feels clunky and slow. Though it looks just like Hot Shots Golf’s classic swing meter, it feels like a fair bit rougher. I just could never get connected with it.

And while it may float someone else’s boat, the art style isn’t doing it for me. The courses look fine, but the characters fall flat. Frank, the big-chinned power swinger, looks like your generic thick-chested cool guy from an American cartoon. Reiko, a scientist, wears goofy oversized glasses and has twiggy legs.

I’m glad that the Xbox One is getting an arcade-style golf title at launch. I hope that a bit more polish can be put into Powerstar Golf before then.