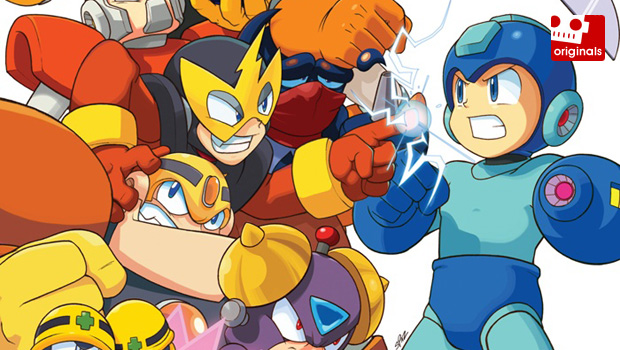 When Archie Comics originally announced that it would be publishing a comic based on Mega Man, I was positively ecstatic. No matter what you may think of Archie’s Sonic the Hedgehog series, you can’t deny it’s popularity. There’s a reason it’s the longest-running videogame comic in the world, and it is my sincerest wish that some of that magic will rub off on the Blue Bomber’s latest outing.

Two major story arcs down and the comic is in full swing. Of all the Mega Man comics and cartoons I’ve read and watched, this adaptation is by far the most faithful to the source. There are tons of cameos and nuggets in both the writing and the artwork that would make any hardcore fan happy. It also tackles some surprisingly heavy issues by highlighting the repercussions of battle. It’s definitely worth a read.

Ian Flynn, the lead writer for Archie’s Sonic, has taken up the pen for Rock’s adventures. I got a chance to chat with him last week about the comic’s current direction and what we can look forward to in the future. During it all, I tried my best not to act like a dribbling fanboy. I’ll leave it up to you to determine whether I succeeded at that. 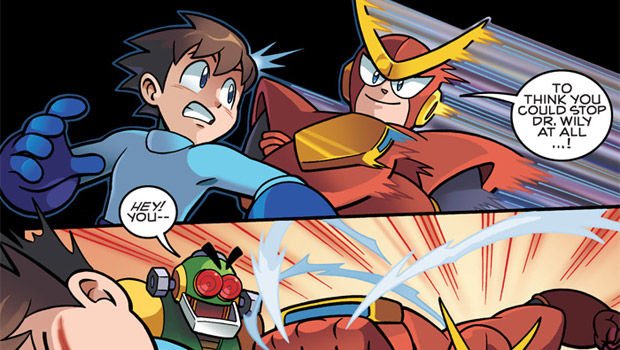 Before we begin, I think some congratulations are in order. Mega Man #9 is out this month, which means you’ve just lapped the Dreamwave comic [short-run series that was cancelled once the studio closed]! Good for you guys!

Ha ha ha! Well, it’s easy when you’ve got such a kickass team to back you up. Have you seen Ben Bate’s pages? Good lord, man. He’s phenomenal! [Ben Bates is the current story arc’s illustrator — Tony]

I’m glad things are going swimmingly. For a while, I was worried about the comic’s future. I had heard something about low newsstand numbers.

If I recall correctly, I think that was MM #3, and that was a shipping issue. Actually, MM has been doing very well — #2 broke the usual trend in comics by outselling #1. MM is doing very well, so no worries there!

And that’s all while Capcom keeps CANCELLING EVERYTHING.

Actually, it was Capcom who brought the idea of a comic to us. They’ve been crazy supportive of the project. I know the rash of game cancellations looks suspect, but they’ve been nothing but cool with us.

Capcom is weird like that. It’s also weird that Mega Man as a property has existed for 25 years as of this year without a proper American comic series (save for the Dreamwave one, of course), despite its popularity early in the 90s. I feel like we’re seeing something of a Mega Man revitalization in terms of cultural interest. What do you make of that?

I think it’s only natural to give a franchise as old and as beloved as Mega Man a new coat of paint. He helped get modern videogaming going, and he’s one of the most recognized icons of the era. He’s been reinvented to stay current for a quarter century, so everyone once in a while, it doesn’t hurt to buff up the classic and say, “Remember why this guy was awesome? Is still awesome? Yeah, we thought so.”

And now you get to teach a new generation of kids exactly why he’s awesome. 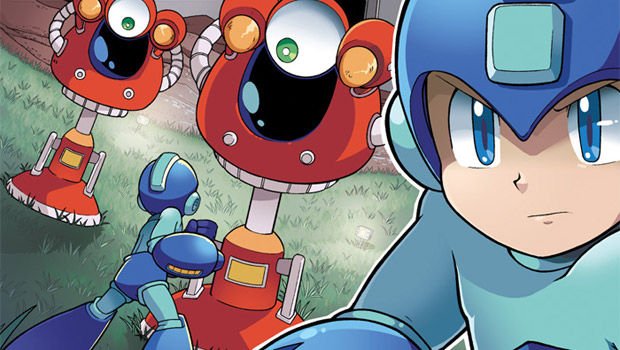 You also do writing on the Sonic comic, but you boarded right in the middle of that series. You had all this history to be mindful of. How does it feel to be able to take the reins of a new series from the outset and tailor it the way you want?

Honestly, Mega Man felt a lot like jumping into Sonic. Granted, there wasn’t a precedent set in the comic (Dreamwave and Megamix [90s manga by Hitoshi Ariga — Tony] notwithstanding), but the games had already set up the characters, world, and stories. I still had a ton of canon to learn and take into account when setting things up. There is a certain degree of freedom, of course, but I’ve been trying to stay very close to the path set by the games.

Does that mean, before writing a new chapter, you are replaying old games, watching the Ruby-Spears cartoon, listening to The Protomen, perhaps? Get yourself in the mood and mindset?

I have read more fan wikis and watched more “Let’s Play” videos on YouTube than is probably healthy (ha ha)! I want to be as faithful to the games and give as many fun nods for the Mega Man fans as I can. I don’t want folks to just have a “nice” Mega Man comic, I want this to be an extended love letter to the franchise.

And that includes little nods to the fandom, too. I caught those Megas lyrics in #3!

Yeah, The Megas [Los Angeles-based Mega Man cover band — Tony] were amazingly cool about the whole thing. We contacted them first to get their blessing, and they were all for it.

You also worked “pew pew pew” into the writing. That’s when you know you understand.

I’m amazed at all the Easter eggs and secrets slipped into both the writing and the artwork. I even noticed the heroes from Capcom’s Forgotten Worlds in #2. That’s really hardcore!

The credit goes to Spaz [Archie illustrator Patrick “Spaz” Spaziante — Tony] on that one. I appreciate Mega Man, but Spaz adores the series. He’s a huge fan!

You’re just the man with the words.

Right. I let the people with real talent make me look good.

Then you ride that talent right into interviews and Comic-Con appearances. I know how you work. Shameful. 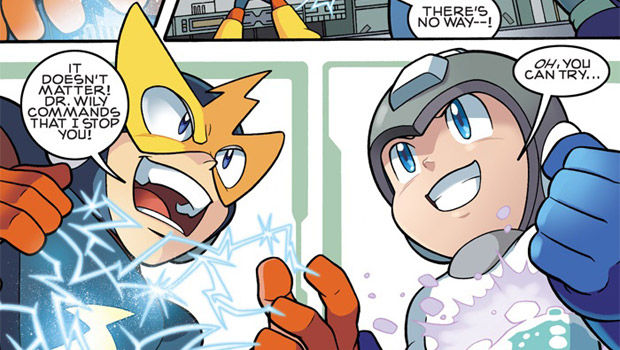 One thing I really appreciate about the writing is how you paint Mega Man as this really conflicted figure, an element that is only lightly touched upon in most other incarnations of the character. He’s cold and distant one second, then he breaks down and goes wild the next. It’s surprisingly deep for a children’s comic.

It comes from really looking at what’s going on here. For Rock, it’s a childishly simple thought process: he can help, so he will. From an adult perspective, you can see how bad that can go in so many ways, which makes the earnestness of his mission all the more touching. It’s not hard at all to spin such a simple concept into something that’s both moving and inspiring.

It’s just a concept that is frequently glossed over. You’ve gained a lot of fans and respect by going in the direction you did.

Show respect, gain respect. That in itself is a life lesson (ha ha)!

Cut Man’s dialog includes frequent “cut” puns (“You just can’t make the CUT!”). Be honest — were you basing him off the Ruby-Spears Cut Man?

Like I said, I want to honor all things Mega Man. Even the horribly punny ones!

You even honor Oil Man and Time Man. It was a genuine surprise to see them make an appearance immediately after the first game’s adaptation.

I wrestled with whether or not to put them in the first arc and count Powered Up as the retconned “true” first game. But MM1 is held in such high regard (and Time / Oil Man received something of a mixed welcome), I figured we’d stick to the original for the fans then bring in Time / Oil Man for completion’s sake. 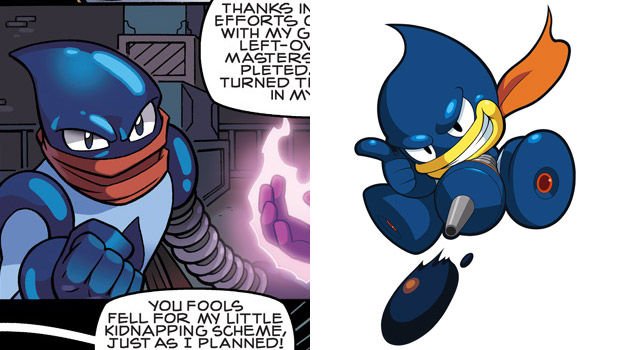 Okay, wrapping Oil Man’s head with that scarf… whose idea was that?

That was Spaz, again being brilliant. We all knew something had to be done to make Oil Man’s design more… presentable, shall we say? Spaz made it happen.

Riiiiiiiiiight. It was a small tweak which folks appreciated.

Still, Dragon Ball can get away with it. Totally not fair.

I dunno. Have you seen Blue Popo?

You’ve been sticking close to the games so far, but given that you have over two decades’ worth of material to catch up on, are you planning on just hammering through adaptation arc after adaptation arc, or are you going to slow down with more original stories for stretches of time?

We’re going to be doing our own thing as well, but to help expand the world, we need other villains beyond Dr. Wily (and the tricks revolving around Dr. Cossack, Proto Man, and Mr. X don’t count). We need others working in the field of advanced robotics. Everything we do — game adaptation or original — is to flesh out the world of Mega Man and give him a supporting cast / world that doesn’t always involve eight bosses to fight. 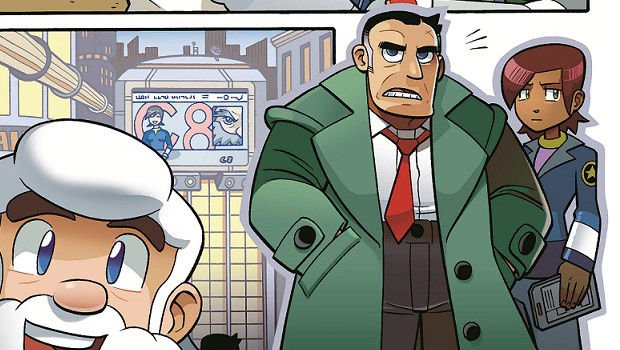 Gotta use that English degree somewhere!

So you’re saying that Mega Man is like Shakespeare, correct?

Ian Flynn says Mega Man is exactly like the works of William Shakespeare. I’m quoting you on that.

“To die, to sleep… perchance to dream? I’m scared, Dave. Will I dream?”

I’ve read in the past that you might steer clear from original Robot Masters, but — BUT — if your EiC mandates that one be made, what would you call him?

I don’t want to go overboard with new Robot Masters — we’ve got 80 to choose from from the main games alone — but we’ll be adding one or two where necessary. I’m afraid I can’t comment further at the moment.

Here’s one you can have for free, and it ties into your Shakespeare motif: Othello Man. His power is the Othello Barrier, which surrounds him with discs that are black on one side and white on the other.

He’s weak to the Iago Backstabber!

See? You can work that into at least a four-issue arc. You’re welcome. 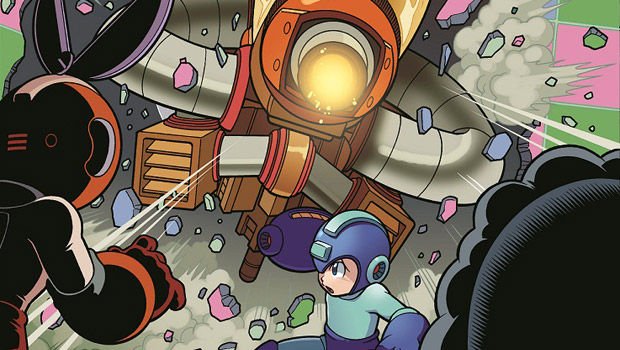 But yes, it’s great that you have this vast stable of characters to pick from. It should provide plenty of material for a good long while. Speaking of which, is there any one game in particular that you are really excited about covering?

Oh, I can’t narrow it to one. I can’t wait to get to MM4 and Dr. Cossack’s story. I want to get to Proto Man and Bass, even if the latter is way down the line at this point.

Bass made that cameo appearance in one of the extra comic shorts.

Right, and I hope we can tide folks over with that for a bit.

Maybe you could introduce time travel to have him arrive earlier. Just pitching ideas!

Ah, but Quint’s gimmick is time travel. Perhaps I’ve said too much?

Mega Man 2 on Game Boy? You have your work cut out for you if you ever go there! I did not like that one.

I’ve got a plan for the Game Boy games, don’t you worry!

I can say no more!

So far, the comic has been great because of your writing and the various artists. You are the sole writer at the moment. Think you’ll relinquish the pen to anyone any time soon?

I’m always open to collaborators, but ultimately that’s the editor’s call. I’m quite happy where I am. I’m flexible like that. We’ll see what the future holds. For now, it’s me as far as I know.

Will Roll become the action superstar we all hope she can be?

That’s something I’m stewing on, honestly. I want Roll to have a more proactive role than she has in the games, but at the same time, I don’t want to deviate too far from her game version. It’s something I’m working on, and I encourage folks to write into “Mega Mail” and voice their opinion on the matter.

Just don’t give her an arm that converts to a vacuum cleaner and a blow dryer.

Well, I’m happy for you guys! It took a while, but we’ve now got an American Mega Man comic that should be sticking around for a while. The Japanese shouldn’t get to have all the fun, right?

Right! You can never have too much Mega Man. 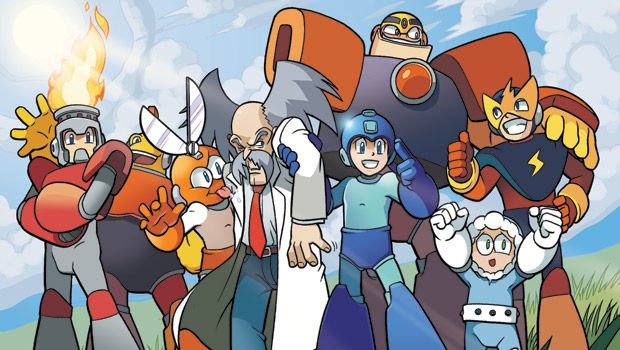