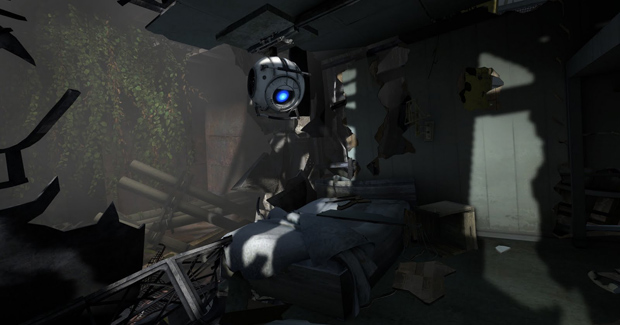 You’ve picked up a controller to play the latest game from your favorite development team. It’s called Policemanofficer 2, and to the best of your knowledge, its similarities to Policemanofficer 1 are clear and expected. You’ll take control of Policemanofficer, you’ll police the streets, and you might even upgrade some skills and stats. All in a day’s work for Policemanofficer.

As you reach the end of the game, something changes. The game begins to feel … wrong. It’s a sense of surrealism you cannot put your finger on; as you fight, you notice little abnormalities. Enemies turn from thugs and gang members to women and children as they fall, and your once friendly fellow officers turn their weapons on you. Suddenly, the game shifts to show you the real events of what you’ve been playing out. Far from an officer of the law, the carnage you have been perpetrating has been against innocents, and the events you thought you were experiencing were merely the delusions of a madman.

Terrible way to make a game? Perhaps, but it’s a reality we may be approaching. Recently, two high-profile sequels have surprised us by straight up lying to us, using their gameplay to trick, manipulate, and mislead the gaming community. And I’ve loved it.

What follows is definitely not laden with spoilers, but your trust in my words may be misplaced.

Truly, only minor spoilers follow. Let’s begin with Portal 2, for which I will spoil only the first ten minutes. 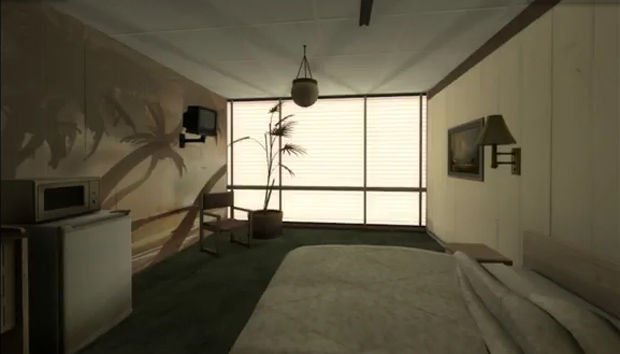 Now, if you’ve played Portal, you’re used to being lied to. Aside from the now-infamous cake, few lines of dialogue in the game really made you feel a sense of trust in what you were doing. You understood that you were “testing,” but as for the bits of wisdom and advice provided by GLaDOS, you might as well ignore any errant line that reaches your ears. Come game’s end, it’s all rubbish.

Sure, the characters lie to you, but never once does the game itself lie to you. Here, I use the word game to refer to the most fundamental level of the experience: the information conveyed from developer to player, the required breaking of the fourth wall where, if only momentarily, the developer may speak directly to his audience. In Portal 2, as in many games, this interaction comes about in the form of a tutorial.

As many games are not wont to do, Portal 2 eschews a formal tutorial in favor of a more organic narrative-based instructional moment, first asking the player to look up, then down, in order to calibrate the axis. Few will blame you if you’re sick of this. It’s transparent and a waste of time.

What Portal 2 does next, however, is brilliant and hilarious. Continuing with a sort of “let’s calibrate your controls by using story” theme, your new companion Wheatley asks your character to perform a few tasks to make sure you’re OK. To make sure that you do not have, as he calls it, “a very minor case of serious brain damage.” Sounds serious, yeah?

Wheatley then asks the player character if she understands what Wheatley is saying, and asks her to simply say yes. A prompt appears on-screen: a textbook example of breaking the fourth wall. The developer — not Wheatley — is asking the player to press A to speak. So, being the player and having no other option, we press the requested button.

That button is, of course, the jump button. It makes the player character jump.

Next, you’re asked to say apple. The same button appears for you to press, though this time the developer’s programming assures you that it will result in your character saying “apple.”

It doesn’t. You jump again. 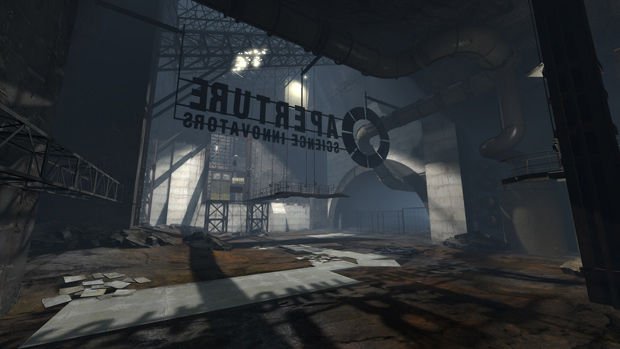 Now, if you’re anything like me, you laughed harder at this moment than nearly any other in Portal 2. Obviously, people with brain damage who jump when asked to speak are funny, so there’s definitely that level of comedy. But there’s also a sense that a brilliant joke has just been told to you — one that can’t be told anywhere else. It’s the film equivalent of a film director appearing in the middle of his film to tell a knock knock joke directly to the audience, though not even film can penetrate us on such a level. We’ve just assisted in telling the joke.

Together, we’ve just created collective comedy though fictional characters, a developer who has broken the fourth wall, and the input required by the audience of interactive fiction.

Something about this just excites me.

But even beyond the excitement of the possibility of future implementations of comedy and player input, how about the simple fact that we’ve so blatantly been lied to, not once but twice. In a row! What does this say about the rest of the game, one in which mistrust is so vital?

Unfortunately, it doesn’t say that much. The initial joke is brilliant, but it’s just that: a joke. And in Portal 2, that’s all it needs to be. It’s a funny way to trick the player into doing something silly, creating a classic moment of slapstick comedy that will live in my memory forever.

Other games take their untruth a little more seriously. Let’s take Dragon Age 2, for example. This will also contain some mild spoilers for the beginning and middle of the game. The game is an example of metafiction: a story within a story. If you really think about it, the story that is told by the game is this: a guy named Varric sits in a dark room and tells a really long story to a woman with a bad accent. It’s in that story within a story that we as the players find ourselves.

Because of this, we become very aware of the narrator despite the fact that we never experience narration while we’re actually playing; it’s all completely separate. Yet from the beginning of the game, we get the idea that Varric’s going to be a bit of a handful. The very first scene is entirely fiction; it never happened. Varric made it up. The first fifteen minutes of Dragon Age 2 are spent playing a lie. 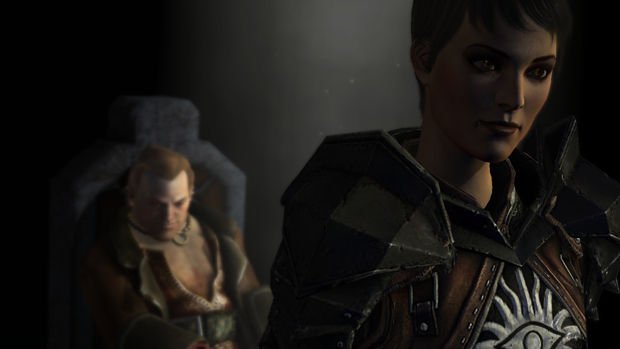 The reason for that is we’re given clear reasons for the game to mislead us. Never is this more clear than when Varric describes his lone assault on his brother’s compound. While you’re usually controlling your created character, Hawke, this scene suddenly places you solely in the shoes of Varric, wielding nothing but a crossbow named Bianca, a belt that has no reason to be as large as it is, and a shirt that doesn’t fit. Immediately, something feels wrong. Where did everyone else go? How are you going to survive against the dozens of armored thugs charging at you?

Then you attack. The first enemy dies in one hit, splattering into pieces upon the tiled stairs of the estate. The next falls in the same way. Another is followed by another, and soon, you’re in the middle of a Rambo-style bloodbath with a character that, up to now, has performed modestly to poorly in battle.

Something is very, very wrong. The player gets that sense. It’s an immediate feeling of surrealism, like the moment at which you realize that you’re dreaming, and you stop yourself in your dream and take control, telling yourself, “OK, I see what’s happening. I’m asleep.”

At that moment, the action ceases and the scene returns to that darkly lit room, where the woman with the bad accent proclaims, “You’re lying.” I knew it, you resist saying out loud.

The amazing thing to me is that I really did know it. I didn’t actively say, “Hey, this game’s obviously using its gameplay to deceive me,” but I remember thinking that Varrus had never been so harsh before, so why would he start now? Why would the rest of the party suddenly disappear?

The big question, though, is why does Dragon Age 2 do this? Unfortunately, I don’t have a great answer. I can’t say that I found the game’s overall story to be told masterfully enough to credit these lies as brilliant moments of storytelling and character development. If anything, they seem to be storytelling outliers — scenes that take you out of the story for a moment, shift the balance, and create a sense of syncopation. In does, however, give us a new outlook on the game, giving players a slightly different viewpoint of the game’s events. Are there more scenes that we should lose trust in? 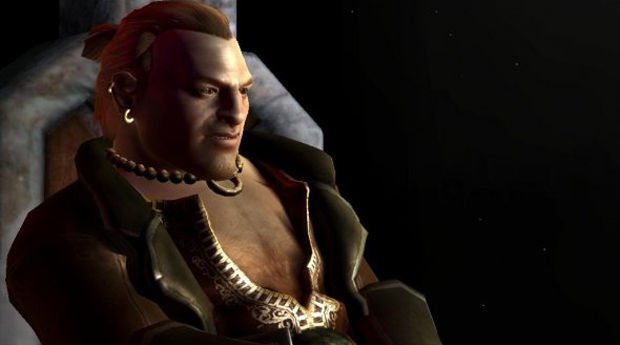 There are plenty of games that have given us an unreliable narrator — someone who we simply can’t trust to tell the truth — and many do it far better than Dragon Age 2 did. But few games use the actual gameplay to do so. While Portal 2 put a smile on my face at every instant except the one in which I realized there was no more of it left, Dragon Age 2 has only one real success to me, and it was this.

If there’s one thing I’ve taken away from my time with that game, it would be the realization that gameplay itself can often be the best storytelling tool, and its many unique qualities can create storytelling moments that simply cannot be found in even the most well-crafted cutscene. And I’m a huge fan of well-directed cutscenes.

If there’s one thing I want to see more of, it’s what Portal 2 does: tell story by manipulating the player’s control over their own interaction with the game. Remember how old RPGs used to reverse the controls if your character became confused? Press forward and you’ll walk backward. Imagine something similar used as a storytelling tool, progressively showing a person’s loss of control over their own mind by taking away the player’s control over the character. Potentially frustrating if implemented poorly? God yes. But it’s also fascinating to wonder how this could be used to create a story that is impossible in any other medium.

For now, the minor touches that we’ve seen in Portal 2 and Dragon Age 2 represent a larger-than-proportional impact upon the overall enjoyment of those games given how quickly the moments appear and fade. Perhaps these developers, or some other intrepid game makers, will expand upon this foundation and make gameplay that deceives while it entertains. If we’re lucky, it won’t be an atrocious failure.