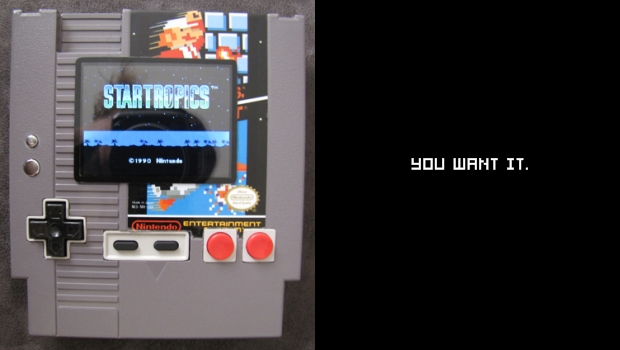 I’m not so sure about the practicality level of this, but the awesome level is off the charts. Airz, a forum member over at Ben Heck’s site, created a portable gaming system out of a Super Mario Bros. cartridge and a classic Nintendo controller. The thing has sound, a nice screen, plenty of games from the NES, Game Boy and Game Boy Color and 4GB of space to save them all on.

Airz says that the NES controller fit into the cartridge like it was designed to do so, and that it makes playing the games way easier than the crappy controls that were on the random, Chinese portable media player he used as the basis for his creation. He pretty much got everything you could possibly want in the cartridge as well. Not only does it play games, but it also has an expandable SD card slot for more memory,  a “2.8” TFT LCD, a built-in rechargeable lithium battery, a video player, an MP3 player, an FM radio, a picture viewer, an audio recorder, a camera and video camera (disabled to fit in the case), and the creme de la creme, a TV out plug so that you can play it on the big screen as well.

Pretty awesome, as you can tell from the video of it below the jump. I bet you wish you could have one. Well, you can. Evidently, making mods isn’t always the cheapest things so Airz is selling this thing. Just head over to his forum post and PM him. Discuss monetary values, come to an agreement and in a few short weeks you’ll be rocking a portable NES gaming cartridge.