A funny game that is seriously good

People often assume that lighthearted comedies all lack depth, or that their creators don’t work just as hard as those that specialize in other genres. This is part of why we so rarely see a comedy film win an Oscar.

Knowing this makes me all the more worried that people will assume the wrong things about Pool Panic when it’s released on Switch and PC later this year. This game has a ton of depth. Like the Katamari series, it takes a simple and easy to understand gameplay hook then introduces it to an incredibly wide range of scenarios, turning it on its head each time. You play as a cue ball wandering through a huge world where you meet other balls and inevitably try to knock them into holes. Each area adds a new spin on that goal, requiring the player to think outside of the box. For instance, you may meet a bunch of balls in a marching band that refuse to be knocked very far. Only by pushing down the eight ball first, then grabbing his band leader hat, can you lead the other balls in the band down the pocket.

That’s just one of over a hundred stages in Pool Panic, each one building on the last in an effort to defy expectations. Later on, you run afoul of a roaming group of bear balls that can only be taken down with the help of a bear hunting ball who lives in the woods. After the bears are cleared, you’ll be able to make it to the suburbs where you meet a ball who enjoys a posh lifestyle, though that hasn’t made him immune to vermin infestations. By putting on a rat hat, you can shrink down to the size of a mouse and head into the yuppy ball’s living room walls, where your goal is to muscle the rat balls into the holes with their cheese.

All these seemingly incidental, purely nonsensical events are part of a larger story that may or may not involve the God of Pool threatening to plunk the entire planet into a black hole. 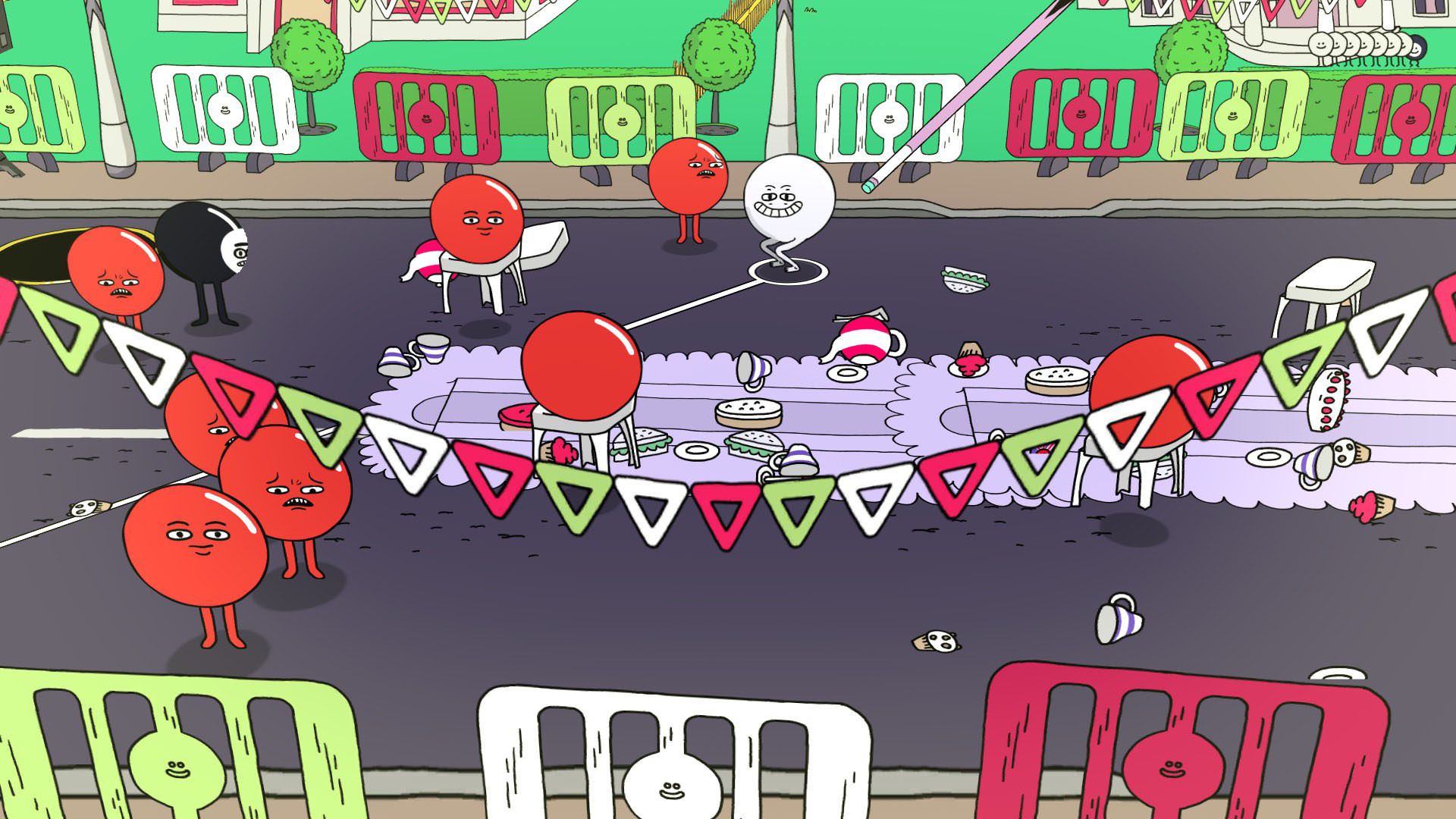 Then there are the multiplayer modes where you have to do things like avoid a zombie ball infestation, paint a number of random balls with your color in a Splatoon-like manner before the time runs out, or win a medieval jousting match atop of a majestic, bulging ball horse. If party modes aren’t your thing, there are also optional single-player challenge stages that require you to get every ball on the field bonking into a hole in just one move. On top of all that, the story mode is broken up with the occasional semi-boss fight including a raging bulldozer, a giant spider-ball, and other enormous threats. The fact that the game this patently absurd was made with this much care and forethought only makes it funnier.

Pool Panic was created by Mike Robinson and Angus Dick, a team who’s collective gamography includes the high class Sony exclusive Hohokum, the WarioWare-esque Frobisher Says, and even a game site featuring the Gorillaz. I suddenly got to meet them both of these men at PAX East, where they lay in wait within a dark inner sanctum of billiards designed by Adult Swim Games. That’s where we shot this video, which also features the creators of the Bit.Trip series for some reason. Though the game isn’t out yet, they are already big Pool Panic fans, so don’t be surprised to see some sort of Bit.Trip Billiards crossover sometime in the future.

Rumor has it that there may also be some sort of shared universe between Pool Panic and the classic William Dafoe family film Muddy Buddy, but the details of that dynamic remain to be seen. Hopefully we’ll only have to wait a few more months before Pool Panic is released to the world so we can find out for ourselves.