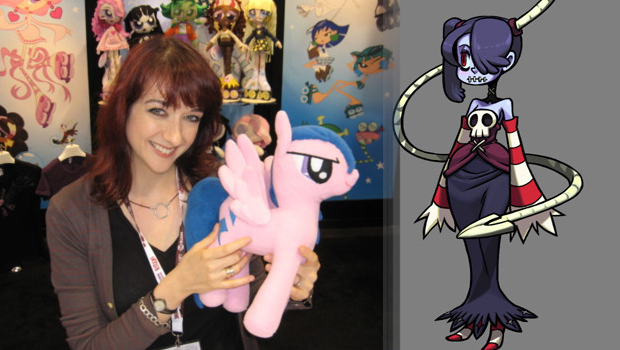 …and the creators of Skullgirls?

Lauren Faust is a powerful person. She helped take a relatively unremarkable children’s show aimed at pre-teen girls and transform it into a multi-media, multi-generation, multi-billion-dollar sensation. She also apparently has the power to resurrect dead videogames. Free fan game My Little Pony: Fighting is Magic was killed off by Hasbro for infringement of copyright. Now it’s back in production, featuring all new characters designed by Faust herself, presumably for free.

In order to stick to the original game’s combat system, every character will still have four legs, but their ongoing pony-hood is now in question. Alpacas, Kittens, and Muskrat are just a few of the proposed replacement species. My Little Baby Muskrat? Sounds good to me.

On top of that, Lab Zero (the creator’s of Skullgirls) have volunteered to give the developers of Fighting is Magic their source code if they reach $725K in their in Indiegogo campaign. This is not collaboration that many of us saw coming.

What if Faust’s new designs go on to become more popular than the ponies that made her famous? Will this new Skullgirls/Pony hybrid game converts the Brony faithful to a new Faustian franchise forever, leaving Hasbro and their fan-stomping ways behind for good? It will be interesting to observe it all unfold. Either way, Faust has cemented her place in the hearts of millions of fans as a hero for life and Lab Zero just opened the door to a whole mess of new potential fans, so good on them.