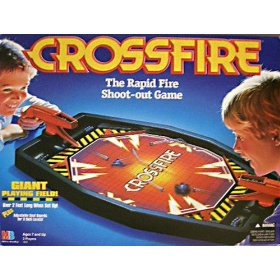 While many of us would argue that Pong in 3D is called tennis a few enterprising gamers out there thought differently. They thought that Pong in 3D should be Pong. So they went ahead and made a tabletop version of it with a real ball and little flippy pads. It’s an interesting concept, but in practice it seems to fall a little flat.

The guys describe this as their first attempt at it so I suppose the lack of functionality can be excused, but you’d think they would have thought to slant the table towards each side a bit so the ball wouldn’t stop rolling. I think if they do a bit more work on it and maybe make those numbers change automatically when the ball is missed they could have the next Crossfire in their hands.