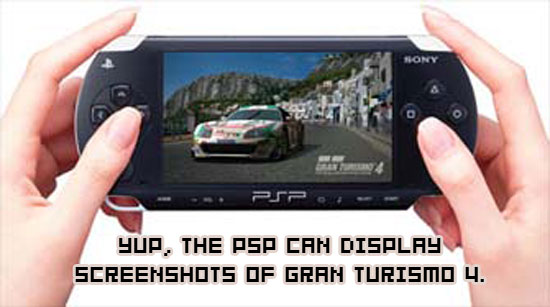 I remember back in the day, when I used to walk uphill to school in the snow, with no shoes on. Sony had revealed the PlayStation Portable, and along with it, the promise of Gran Turismo 4 Mobile. Originally set to be released sometime in 2005, it only lives on through retailer release lists, and in the hearts of racing fans worldwide. Well, Polyphony Digital are really working on one … they swear.

“We are working on the PSP version,” Grand Turismo creator Kazunori Yamauchi told GamePro, “and we will get around to it eventually.”

So wait — are they actively working on it, or will they “get around to it eventually”? Oh, your signals are so mixed, Yamauchi! Don’t toy with our emotions. He goes on to say that once Gran Turismo 5 ships for the Playstation 3 in 2008, work on Gran Turismo Mobile (will it be 4 or 5?) should be complete.

No really, we believe it this time. Honestly.