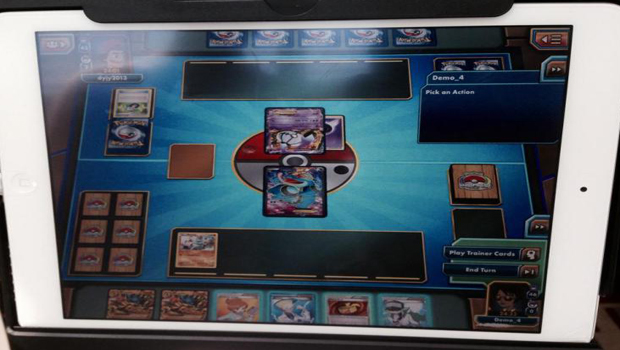 Nintendo seems to think that the potential short term profit they could make from supporting other devices wouldn’t be worth the long term devaluation of their own hardware that would come with it. Critics say that Nintendo’s hardware has been so devalued by +15 years of little to no AAA third party support that it’s time to face the sad facts and give up.

It’s not that black and white of a situation. There are ways for Nintendo to have their 3DS/Wii U cake and eat the other guys’ install bases too. Case in point — The Pokémon Trading Card Game Online for iPad, which according to Pokémon Master and YouTube personality @TheJWittz, is planned for release later this year.

Apparently he was strolling around the Pokémon Trading Card Game World Championship event being held this weekend and just stumbled upon a kiosk with 8 iPads running an all new virtual adaptation of Nintendo’s classic card game. That’s a weird way for Nintendo and/or The Pokémon Company International to make their biggest announcement of the year, but there you go.

Further details are scant at the moment, but JWittz was able to tell us that “It is an official app in works by The Pokémon Company International (TPCi). I’m not 100% sure on TPCi’s relationship with Nintendo, but it is definitely official and not fan made in any way. It’s an official display run on a TPCi-run event, with a TPCi employee and developer answering questions.” He’s planning on getting a video of the game up on his Youtube channel this weekend, so keep your eyes peeled.