Another Pokemon, more Holowear, and a Halloween map makeover are coming soon

Pokemon Unite has a new playable Pokemon and some fabulous fall costumes lined up for an in-game Halloween event that’s running from October 20 to November 7. There’s enough here — from Charizard’s beanie-with-a-scarf Bonfire Style, to the seed-firing squirrel-esque critter Greedent, to Wigglytuff in pajamas — that I want to show up.

What exactly I’ll accomplish in Pokemon Unite remains to be seen. But I’m interested!

I like that the map itself will get in the Halloween spirit with visual changes, and I’m generally into the idea of taking a less noteworthy or “cool” Pokemon — in this case, Greedent — and getting me to care about them. The rapid-fire seed attack is a good start. That’s my kind of MOBA move. So, as a super-casual Unite fan, I like what I’m seeing.

About once a week, I remember that I’m not playing Pokemon Unite even though maybe I should be, and then it hits me that I’ve fallen off the constant check-in schedule, which keeps my “Ehh, not today!” energy going indefinitely. Limited-time events, particularly ones centered around a holiday, can be the cure for that kind of procrastination.

I completely missed this, but nothing gets past the internet: there’s a (potential) teaser for Decidueye, who was data-mined, in the YouTube thumbnail. Look at the pumpkins! 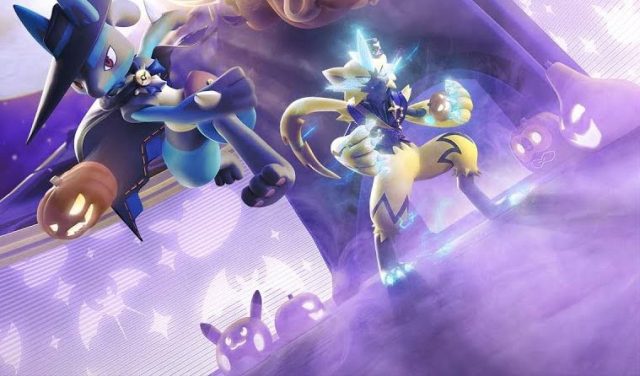 Before becoming a badass archer, Decidueye starts out as Rowlet, aka that happy little jack-o’-lantern on the right side of the image. That sure seems like a nod.

Will Halloween mark your return to Pokemon Unite, or is the October event going to be business as usual? I wonder how many of us have fallen off (and been easily replaced). On the one hand, I genuinely do want to stay invested enough to stay competitive against the average player, but I’m also happy to be “free” from the live-service-game treadmill.