Recently, we witnessed a slew of new Pokémon game reveals, ranging from the rumored Pokémon Let’s Go Pikachu and Eevee, to even a confirmation of a new “core game” releasing later in 2019. However, it was the first announcement of the night that seemed like the odd one out in the form of a freemium title known as Pokémon Quest. The game featured bizarre cube-shaped Pokémon known as “Pokéxel” and was surprise-released on the Nintendo eShop.

Developed by Game Freak and released for the Nintendo Switch (with a planned release on iOS and Android in June), Pokémon Quest has you exploring the blocky designed world of Tumblecube Island. Once there, you’ll search for treasure, ingredients to cook, and battle wild Pokéxel. Your adventure starts by making your way to the island and choosing your first Pokéxel between either Pikachu, Charmander, Bulbasaur, Squirtle, or Eevee. 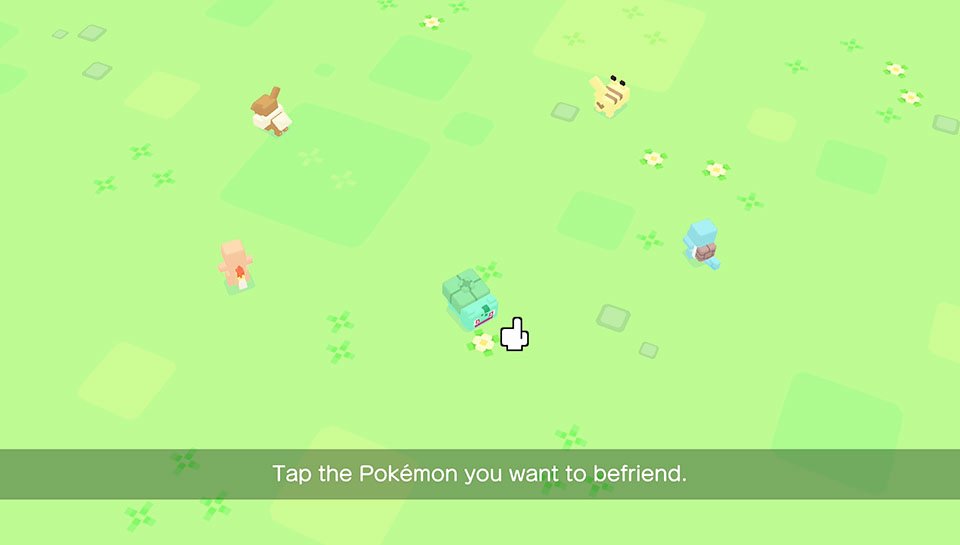 Once you’ve chosen your first Pokéxel, the game will then take you through a run-of-the-mill tutorial teaching you the basics of battling, which can be summarized as simply tapping at various moves on screen. In many ways — for better or for worse — Pokémon Quest is a glorified tapper. You don’t have any direct control over where your team of Pokéxel move, instead, they’ll automatically move to the nearest group of wild Pokéxel and battle. The only real control you have is in the moves they can perform while battling and which Pokéxel you use in your team (for a total of three at any given time).

The game even features an auto-play function, similar to other tappers you’d see on mobile, allowing you to sit back and watch your trio of Pokéxel battle and automatically perform their moves. Once that battle tutorial wrap up, you’ll then set up your own base camp. It’s here where you’ll be doing the bulk of your item management, decorating with various items you’ll earn or purchase with the in-game premium currency known as PM Tickets (more or on that later), as well as cooking food with ingredients you find to lure and obtain new Pokéxel.

As you explore the different stages by doing expeditions, you’ll discover ingredients you can cook and create new recipes. These recipes range from attracting a specific type of Pokéxel, to even a specific color. The more dishes you create and experiment with, the larger your selection of recipes become, resulting in more Pokéxel you can potentially obtain. You’ll also find stat-increasing items you can equip to your Pokéxel known as Power Stones. These Power Stones allow you to increase their attack power, overall HP, or even add buffs and effects to different attacks. The higher these stats increase, the higher your overall party strength becomes, allowing you to tackle tougher stages.

As for the expeditions and stages themselves, each specific area of stages has a theme and typing assigned to them. Having a Pokéxel or team of Pokéxel that’s effective against the stage typing will also give you a bonus towards your overall party strength. Each of the stages has a fairly unique look, ranging from forests, to open fields and rivers, to even Zubat-filled caves. Admittedly, I really dig this aesthetic and the overall Pokéxel designs themselves; seeing a cube-shaped Onix is something I never thought I’d want until I actually witnessed it. But, the music in Pokémon Quest is the real star of the show. Game Freak once again proves it can crank out the best tunes in the business for this series. 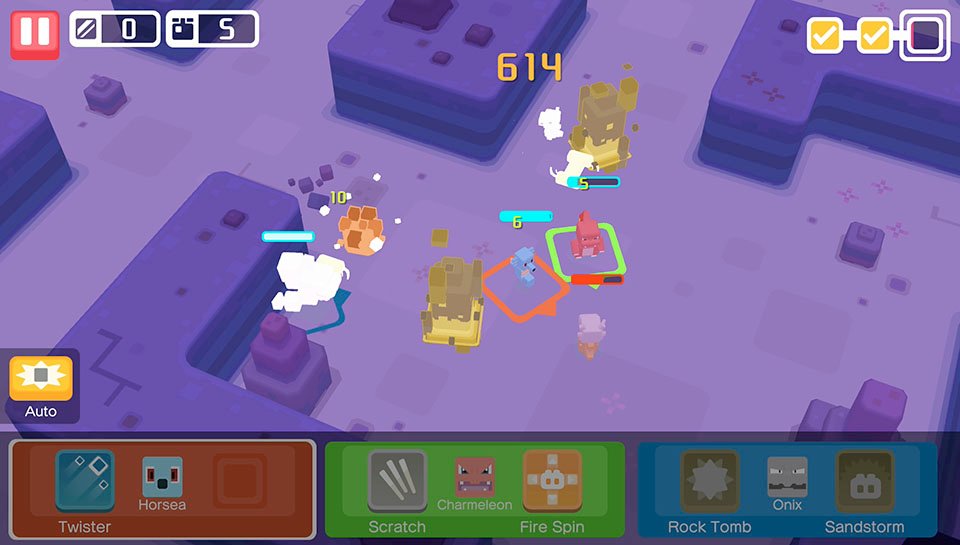 As you begin to progress through the stages, you’ll begin to notice roughly about an hour in (shortly after the third area, Backforth Brook) that they ramp up in their recommended party strength. It’s around this point I’d say the wall of grinding begins and use of PM Tickets starts to become noticeable. In order to further increase the strength of your party, you’ll either need to complete stages to find Power Stones and equip them, level up your Pokéxel, or obtain new Pokéxel in general. However, each time you enter a stage it will drain a part of your energy bar. Once your energy bar hits zero, you’ll need to wait upwards of 20 minutes to explore another stage or spend 20 PM Tickets to fully increase your energy bar, allowing you explore five more stages.

Everything in this game more or less revolves around this on-going cycle of how much energy you have or if you’re willing to spend PM Tickets to keep progressing. Cooking food requires you to complete a set number of stages, and doing those stages then drains energy, so, in order to progress further into the harder stages, you need to grow your team strength by grinding easier stages or getting stronger Pokéxel (with the rare occasion you run into a Pokéxel that wants to join your party in a stage). It all boils down to whether or not you’re willing to keep playing and spend PM Tickets to keep progressing. Which, admittedly, the game will give you plenty of opportunities to earn them with daily challenges you can complete. By the time my first play session was done, I had a little over 100 Tickets. 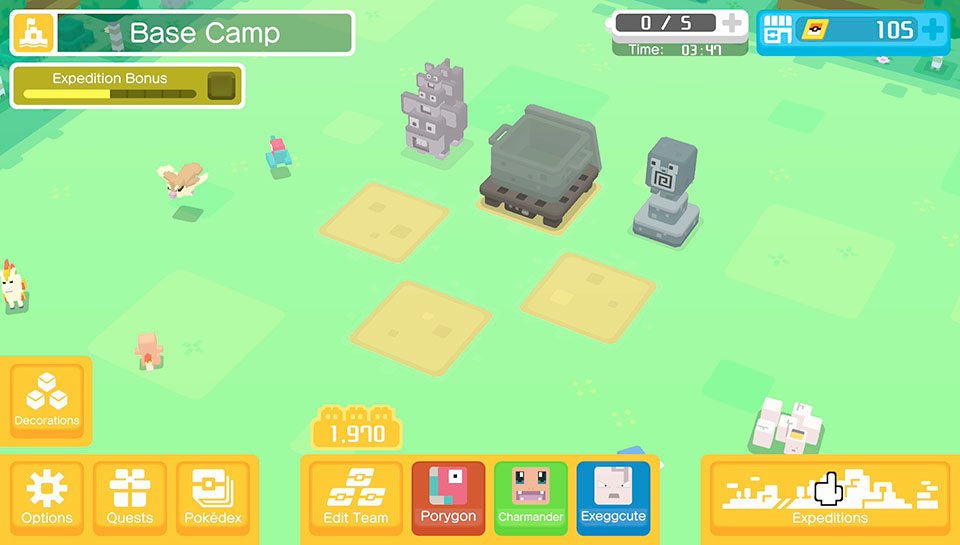 You can also use PM Tickets to buy decorations for your Base Camp, such as statues or other cute fluff that you can place and give you bonuses such as increased drop rates for ingredients. You can also purchase larger Box Expansions, allowing you to further increase your inventory for how many Pokéxel or Power Stones you can carry. The in-game store offers different DLC bundles you can purchase, in various price ranges, with different types of decorations and Pokéxel on hand that you can see below: 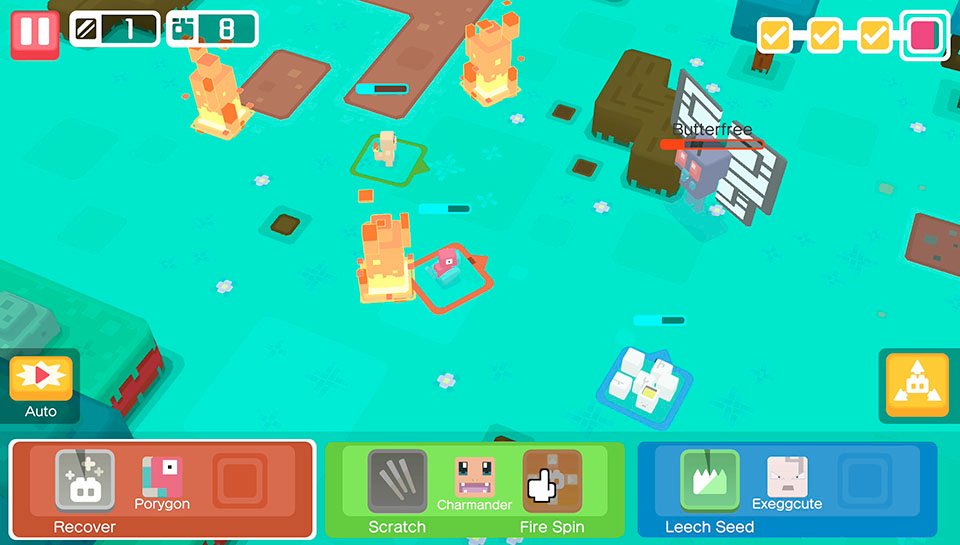 During my roughly five hours I spent with Pokémon Quest, aside from some minor camera grievances, it’s more or less the freemium experience I expected the moment I realized it was a tapper. The visuals and soundtrack are great, but whether or not you enjoy this type of game depends on if you enjoy this specific gameplay loop and formula. Despite the premium currency, I never once felt pressured to spend actual money to keep progressing, as you can simply just set the game down and come back an hour later with a full energy bar.

If you’re patient enough, I can easily see plenty of hours being poured into this without spending a dime. So, if you’re after an adorable time-waster for your daily commute, Pokémon Quest could be for you. But, if you’re looking for a more traditional Pokémon experience on the Switch, you certainly won’t find that here. Thankfully, we have exactly that coming down the Switch pipeline very soon.

[This piece is based on a retail free-to-play build of the game.]