Of all the games I experienced at EGX 2018 in Birmingham, England this weekend, none had the simplicity of Nintendo’s upcoming Pokémon: Let’s Go Pikachu & Eevee. It’s the kind of casual ease that could bring in a host of new players, whilst simultaneously sending veterans into a rage, likely with accusations of Nintendo “dumbing down the franchise”.

Pokémon: Let’s Go Pikachu & Eevee was described to me as a mix of classic releases  Pokémon Yellow and Pokémon Gold & Silver. Played with the very cool Pokeball Plus controller, the entire game can be operated by no more, or less, than a single thumb and some deft wrist-flicks. 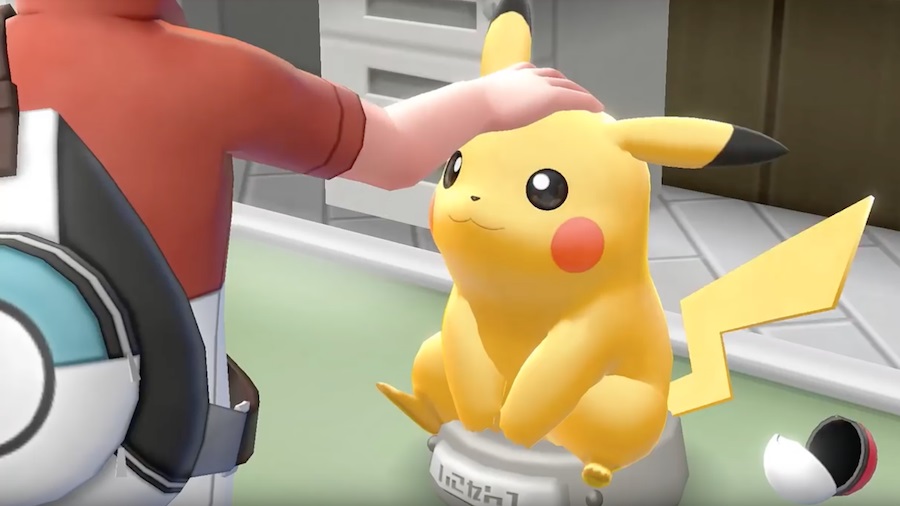 After picking up the novel wireless device and looping it around my ring finger, I guided my avatar – with Pikachu sat neatly on his head – into a forest full of wild Pokémon and other trainers, all just dying to be taken down a peg. Let’s Go eschews the random encounters of previous titles; all wild Pokémon can be seen sauntering around the map, colour-coded to their respective levels. Players control their avatar and menu pointers with the Pokeball Plus’ tiny thumbstick, clicking to interact with objects and NPCs, or to select choices in battle.

Upon encountering my first wild Pokémon, I tossed a Pokeball with a physical flick of the wrist, and bagged my first slave. A Caterpie! You’re in deep shit now, Team Rocket. In a really fun touch, once you’ve caught a Pokémon, you can hold to Pokeball controller to you ear and hear desperate cries for freedom fun noises coming from within. These sounds, as well as the icons in your inventory, are taken from classic Pokémon releases, bridging the gap between titles old and new.

After bagging a couple of low-level Pokémon with relative ease, I was pretty confident I was ready to be the very best, like no-one ever was. So I stepped up to a trainer hanging out by some trees and leapt into battle, Pikachu leading the way. You know how these fights work; you select various attacks for damage, buffs and debuffs, with 3D models performing commands on-screen. One of Pikachu’s attacks literally looked as if he farted stars in Pidgey’s general direction. Pidgey fainted. Poor guy.

After a little exploration, some more wild catches, and a couple more battles, the demo was over. Pokémon: Let’s Go Pikachu & Eevee appears to be the classic Pokémon experience trimmed down to its absolute base form. Let’s Go features plenty of nostalgic reminders from the decades of past releases, but trims as much as possible to leave just the player, the inventory and the battles. Literally played with a single thumb, Let’s Go is a trouble-free exercise. I can definitely see winding down with it in bed, or perhaps whiling away a long journey. Another way to look at these titles are as a beginner’s introduction to Pokémon, providing a new generation of kids a gateway into the beloved brand.

From what I played of Pokémon: Let’s Go Pikachu & Eevee, the series has never been more simplistic, more stripped-down or laid-back. With the great and inventive Pokeball Plus controller, and sporting the colourful graphics and iconic sounds that are series trademarks, these titles will appeal to a younger market, or maybe even Trainers who just wanna wind down their afternoon with a bit of no-frills Pokémon action. Veteran players, however, may be left uninspired by the seeming shallowness of it all. But let’s face it, it’s not like they’re aren’t plenty of other titles available to scratch the more professional Pokémon trainer’s itch.