I’m always fascinated by developer interviews and retrospectives on popular games, and Pokémon Go was easily the biggest release of the year so far. Google’s Cloud platform was the tech running in the background for Pokémon Go‘s launch, and the team posted an article today that explains a little bit about what was going on behind the scenes.

The article is a little more technical than I was expecting, but there is some interesting stuff in there. During the initial rollout period, developer Niantic was expecting a fairly small launch with a gradual increase in users. What actually happened, of course, is that the app became one of the most downloaded in history, a worldwide cultural phenomenon that dominated the news for over a month.

While Niantic had a plan in place if the app was more popular than it was expecting, the actual downloads blew past its worst-case scenario. At its peak popularity, there were up to 50 times more server interactions than Niantic had anticipated. 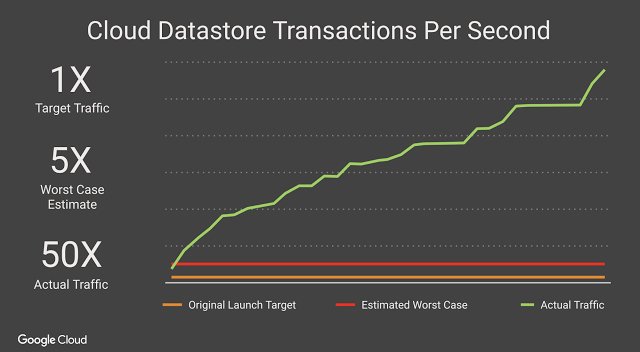 Another thing I found interesting is that Pokémon Go was the field test case for Google’s Customer Reliability Engineering (CRE), and it sounds like it was a trial by fire. When the app launched in Australia and New Zealand, Niantic could see almost immediately that its initial estimates for download numbers were insufficient, so it called in Google for reinforcements. This helped add more server capacity for the U.S. and Japanese launches later in the month. Apparently the Japanese download numbers tripled those in the U.S., so there’s no doubt those servers would have been melting into slag otherwise.

Since Niantic is made up of ex-Google employees and maintains a strong working relationship with Google, it’s doubtful that any other company would have gotten the same response. In other words, as rocky as Pokémon Go‘s launch was, it could have gone a lot worse.

I’ve been playing Pokémon Go on and off since the beta, and to Niantic’s credit, it’s still working on improving the game. Most recently, we learned that the “spawn nests” of similar creatures spawning in a close area have been randomized, making the game a little more equitable for people who don’t live near a Dratini nest. Although it’s not as popular as it used to be, I still see people walking around with their phones in hand from time to time. And I can’t help but join them. In fact, I just hit level 20, so I have Ultra Balls now.