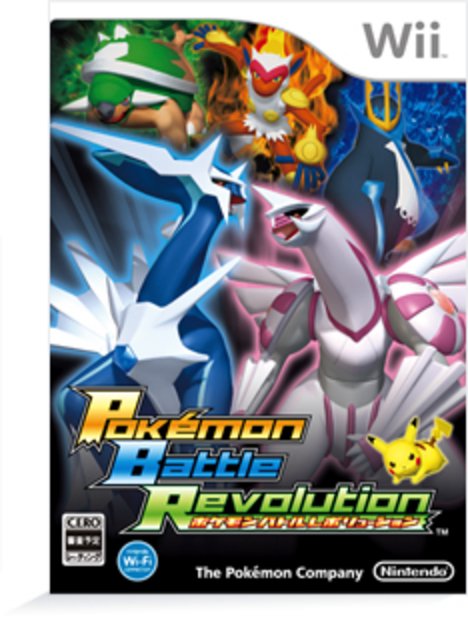 Remember how we heard from Nintendo about connectivity between the Wii and the DS? Well, we’re finally getting it in the form of Pokemon Battle Revolution, where players will be able to control their pokemon using their DS, and if they’ve got Pokemon Diamond or Pearl, then they will also be able to import their characters into Battle Revolution.

I’m actually glad to see this, since I’m planning on picking up Diamond/Pearl, after being out of the Pokemon loop for so long. I guess there’s something about how fun the original game was, and if you separate it from the merchandising crap, then you’ve got a perfectly good game.

There’s something else, though. Later on in the press release, there’s a curious statement about some of Nintendo’s other games:

Pokemon Battle Revolution will be joined by Super Paper Mario(TM), the first Mario(TM) game for Wii; Mario Party(R) 8, a multiplayer party game; and Big Brain Academy(TM), a brain-training game that builds on the phenomenal success of the Nintendo DS brain games.

Now, the wording on this is a little vague. Does this mean that we’ll be seeing DS connectivity in all of these games? Brain Age and Mario Party 8 sound very likely, and almost expected, but Super Paper Mario is one that surprises me a little bit. Do you guys think that I’m interpreting this correctly? You can check out the whole press release after the jump.

REDMOND, Wash., March 7 /PRNewswire/ — Wii(TM) owners of all ages have discovered the fun of playing with a group of friends in the same room.  Now for the first time players can compete with one another near and far with Pokemon(R) Battle Revolution, a game of remarkable firsts:

When Wii and Nintendo DS are linked, players can use their Nintendo DS units as controllers or import characters from the upcoming Nintendo DS games Pokemon(R) Diamond Version or Pokemon(R) Pearl Version.  Pokemon Battle Revolution launches on June 25 exclusively for Wii and brings a dramatic new
chapter to the Pokemon franchise, which has sold more than 155 million units worldwide.  Pokemon Battle Revolution also serves as one of the standouts in Nintendo’s second-quarter launch lineup, which the company revealed today in conjunction with the Game Developers Conference in San Francisco.

Pokemon Battle Revolution will be joined by Super Paper Mario(TM), the first Mario(TM) game for Wii; Mario Party(R) 8, a multiplayer party game; and Big Brain Academy(TM), a brain-training game that builds on the phenomenal success of the Nintendo DS brain games.  These will add to the ever-growing
library of Wii games, which will total more than 50 by the end of June. Nintendo DS fans will see the arrival of Pokemon Diamond Version and Pokemon Pearl Version, two surefire smash-hits.
“With strong third-party support, Wii and Nintendo DS have games on the way for both casual and veteran gamers,” says Nintendo of America President Reggie Fils-Aime.  “Our new ways to play have attracted millions of players around the world.  This lineup demonstrates our commitment to leading the
industry with the future of video gaming.”
Third-party publishers also have stepped up their support of both Wii and Nintendo DS, recognizing these systems as the hottest things going in the video game industry.  The list of games for April, May and June includes the following:

The worldwide innovator in the creation of interactive entertainment, Nintendo Co., Ltd., of Kyoto, Japan, manufactures and markets hardware and software for its Wii(TM), Nintendo DS(TM), Game Boy(R) Advance and Nintendo GameCube(TM) systems.  Since 1983, Nintendo has sold nearly 2.2 billion video
games and more than 387 million hardware units globally, and has created industry icons like Mario(TM), Donkey Kong(R), Metroid(R), Zelda(TM) and Pokemon(R).  A wholly owned subsidiary, Nintendo of America Inc., based in Redmond, Wash., serves as headquarters for Nintendo’s operations in the Western Hemisphere.  For more information about Nintendo, visit the company’s Web site at www.nintendo.com.
Pokemon USA, Inc., a subsidiary of The Pokemon Company in Japan, manages the property outside of Asia which includes licensing, marketing, the Pokemon Trading Card Game, an animated TV series, home entertainment, the official
Pokemon Web site and an online retail center www.pokemoncenter.com.  Just coming off its 10th worldwide anniversary in 2006, Pokemon was launched in Japan in 1996 for play on Nintendo’s Game Boy(R) and has since evolved into a
global cultural phenomenon.  Pokemon was introduced in North America in September 1998 and today is one of the most popular toy and entertainment properties in the world.  For more information, visit www.pokemon.com.