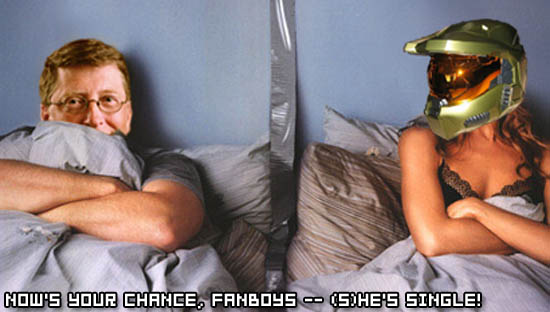 If I’ve learned anything from almost a year workin’ this gig, it’s this: an episode of Podtoid without unexplained delay simply ain’t Podtoid. We had some terribly sexy plans for a Tokyo Game Show Wraptoid, but Niero was taken hostage by a league of small Japanese schoolgirls and held for ransom in Tokyo’s sprawling subterranean Half-Life theme park. He’ll be back next week along with Ron “Comes In Leather” Workman for Podtoid Anniversary Supreme Chips and Salsa Spectacular. That name is… well, we’re working on another.

In the mean time, there’s a lot to talk about this week; namely the Bungie/Microsoft split and the spectacular whining, spitting and clawing that it’s stirred in forums and message boards across the internet. But that’s not all: there’s also you! You and your questions, which can be about just about anything, except things that are dumb. Why? Because dumb things won’t net you that crisp $25 bill (created by the U.S. Treasury just for us) that we’re givin’ away for the sacred question of the week.

So hit that jump and drop them questions!