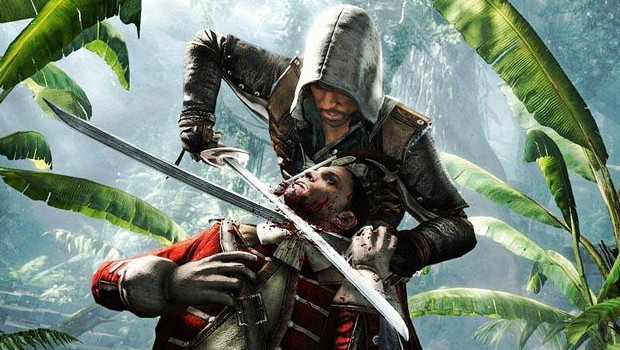 [Dtoid community blogger UsurpMyProse wants us to cut out all the stabbing, and offers a hefty slice of alternatives. His wit is so sharp, you’ll be on the (knife) edge of your seat. The movie Blade. Other puns. Want to see your own stuff appear on the front page? Go write something! –Mr Andy Dixon]

Alright, videogames. Family meeting time. That’s right, sit down, make yourself comfortable; this will only take a bit. And before we start, let me assure you that everything I’m about to say comes only from a place of love and genuine concern for your wellbeing.

But seriously, you’ve got to stop stabbing people in the neck.

Don’t look at me like you don’t know what I’m talking about. You’re not weaseling your way out of this like you do every other troubling trope you try to chalk up to the overblown reactions of social justice bloggers. You’ve got an obsession with stabbing people in the neck, and we’re going to cut it out right here and right now. Though, like, in a figurative sense. Not in the sense of cutting the problem’s throat, because that’s exactly what I want you to stop doing.

Honestly, it’s my fault for letting things get to this point. It made sense when you started churning out all those third-person titles with an emphasis on stealth kills, like Splinter Cell, Hitman, Tenchu, and Assassin’s Creed. If you’re signing on to something with “assassin” right there in the title, you have to expect things to get a little stabby.

But then you started adding it to everything. From first-person shooters — like Bioshock Infinite‘s gross misuse of the Sky-Hook and B.J. Blazkowicz’s Nazi-skewering knife in Wolfenstein: The New Order — to action titles that could have gotten by perfectly fine without any sort of throat puncturing component. I mean, the Tomb Raider reboot? Come on, just let Lara Croft unearth ancient magical treasure and solve basic logic puzzles, not have to forcibly cram an arrow through some dude’s Adam’s apple. Even The Last of Us, one of the most profound achievements in the entire medium, has got more neck shanking than that game that’s actually called Shank.

Though I didn’t realize how out of control your weird fascination with jugular piercing had become until finally playing through Far Cry 3: Blood Dragon this past weekend. What’s supposed to be an amusingly mindless romp through a macho, ’80s inspired techno-apocalypse is marred by Rex Colt’s Chained Takedown ability, which allows him to leap from enemy to enemy, plunging his knife into throat after throat after throat.

So now you’re even shoehorning neck stabbing mechanics into your silly genre pastiches? What’s next? Finding a way to incorporate slitting throats into racing games? Pokémon? The next Madden? Though, granted, that would probably still be less violent than the actual NFL.

Look, I’m not trying to rail against videogame violence. I’ve mowed down enough digital baddies in my time to be considered a genocidal maniac ten times over. But there’s something so personal about stabbing someone in the throat, you know? When players are shooting enemies or blowing them up or shoving them off a particularly high ledge, they’re doing so at a remove.

But when they’re holding them in their arms, watching them choke on their own blood as the life drains from their eyes, players have a few moments to contemplate everything that person was, everyone they’ve ever loved, all their dreams and hopes and desires, and how that’s all been extinguished in a matter of gruesome, gurgling seconds. And then you usually reward them with a better score, because for some reason you think that’s a more admirable way to murder people than going in with guns blazing.

I don’t need all that weighing on me. I’m just trying to unwind after a long work week. Let me kill people without having to stare into their highly detailed faces and be reminded of what a terrible person I am.

I wouldn’t be saying anything if I didn’t think you were capable of doing better. And because I care so much about you, I’ve brainstormed a few helpful suggestions that I believe might go a long way to weaning you off your over-reliance on throat stabbing before you start figuring out ways to put stealth kills into those Farming Simulator games. Such as…

I would never go so far as to say you should remove stabbing entirely from your arsenal. After all, other than bludgeoning your opponent with a rock, stabbing is one of the oldest and purest ways to take out an enemy. Plus, no stabbing means no swords, and we all know how much you love those.

But I do think we should put a strict restriction on anything above the shoulders. Slitting a throat is just so barbaric. Going with the back or the gut is far classier. Romantic, even. It’s the Shakespearean murder method. You’re at least giving the person the opportunity to utter a few dying words, thereby applying a lyrical quality to the brutal act. By comparison, there’s nothing poetic about blood-choked screams of agony, unless you’re fifteen and listen to Slipknot.

Stabbing people in the throat is also straight-up lazy. There’s something so utilitarian and unimaginative about it, like you tried to focus group Middle America for the most broadly appealing way to kill someone. It’s the NCIS of videogame deaths. It’s the kind of death you’d pick up at Home Depot.

I know you can be more creative than that. For Christ’s sake, you’ve let us spit acid on people before. You’ve given us the power to launch miniature nukes and summon entire meteors and make it rain hellfire from the sky. You’re the one who came up with exploding barrels. They’re just barrels that explode when players shoot at them. They make no logical sense, yet you make sure that every enemy fortress is packed to the rafters with the things.

All that stuff may fly in the face of “stealth,” which you’ve become increasingly obsessed with, but you’re telling me knifing someone’s neck is the best you can do? You can’t find more dangerous, precariously placed machinery for us to shove enemies into? Or vats of corrosive chemicals? Some way to quietly induce a heart attack, maybe? Low-level minions of a criminal overlord probably aren’t living a very healthy lifestyle. Combine that with their high stress occupation, and popping out of the shadows in a really scary mask or something ought to do the trick.

Perhaps instead of removing the stabbing entirely, you can just offer the option to cover it up for those of us who find it offensive. If you can’t think of a more appealing way to efficiently eliminate the opposition, then how about just flashing a picture of kittens playing with yarn over the screen. Accompanied by, like, five seconds of a nice John Denver song. You know, something life affirming. You can even include links to charitable causes, or interesting facts about sea creatures.

You’re probably worried that might disrupt the “flow” or “immersion” of the gaming experience, but I’d rather not be immersed in having to watch someone bleed out from a neck wound. I’d prefer to be immersed in some smooth adult contemporary while learning that a baby sea turtle’s gender is determined by temperature.

You also have a nasty habit of stabbing first and asking questions in exposition-heavy cutscenes later. Even if you are tasking players with navigating hordes of thugs who will shoot them on sight, it’d be nice if instead of “Press X to Kill” we could have “Press X to Attempt Civil Discourse.”

At the very least, make the effort to depict us humans as something other than savage killing machines incapable of having rational conversations with one another. I’m not necessarily saying that isn’t an accurate portrayal of humanity — I’ve been to a McDonalds at three A.M. in a college town, I know the horrors we’re capable of — but being able to talk through conflicting points of view is always preferable to shoving that point of view straight through someone’s larynx.

Maybe you can try replacing all the knives in players’ inventories with helpful literature and pamphlets geared toward promoting better, alternate lifestyles for gun-wielding terrorists. Or instead of stealth kills, try stealth hugs. Murder should be a last resort, because the only issues you should ever stab your way through are ones that can’t first be solved with a good hug.

We certainly don’t lack for choices when it comes to gaming in the modern age. With crowdsourcing, indie efforts, and the industry’s desire to monetize every imaginable niche market, I could go the rest of my life without having to play a single game that requires me to stab people in the neck. Hell, we even have games now where you just walk around and look at stuff. Sometimes you even get to do it while being a goat. It’s a glorious time to be alive.

You should be trying to usher in a new age of entertainment. You should be exploring the limits of our imaginations, unshackling us from the limitations of the past, and challenging everything we know and expect of you.

Or, if that’s too hard, just go back to maiming people everywhere outside the neck region. Let’s give throats a rest, buddy. Life’s too short to spend it always shortening others’ lives the same way.