We’ve given you our impressions of the PlayStation Vita hardware. We like it. A lot. But great hardware is useless without great software, so we’re going over the Vita’s operating system and programs today in this FAQ collection.

Again, we’ve taken most of these questions directly from Destructoid’s readers. If you have more questions on the Vita’s OS, UI and programs, let us know in the comments section. We’ll answer them and add them to this article as soon as we can.

[Update: This FAQ has been updated after testing US PlayStation Vita hardware.]

It’s very simple. I was expecting some complicated Sony nonsense, but the Vita’s UI is about as simple as it gets. There’s a grid of bubble-ish icons for each of your applications and installed games. Swiping up and down lets you scroll through your icon screens. Simply touch an application icon to run it. A game page that Sony calls “LiveArea” will pop up and let you confirm that you want the application to run. On this page you’ll also find touchable pictures that serve as links to content related to the application. For example, on Hot Shots Golf‘s app page, my Vita has links to the game’s online modes, the Japanese webpage, online item shop and more.

You can customize some aspects of the UI. You’re able to freely move your icons around to arrange them in different screens, much like Apple’s iOS. Each screen’s background can be set to any number of colors, or you can use your own images as backgrounds.

Running applications are lined up from left to right, with horizontal swipes bringing you to each of the application’s pages. A downward swipe from top right to bottom left of these pages closes the application.

The UI is smooth and easy to use. I have no complaints. 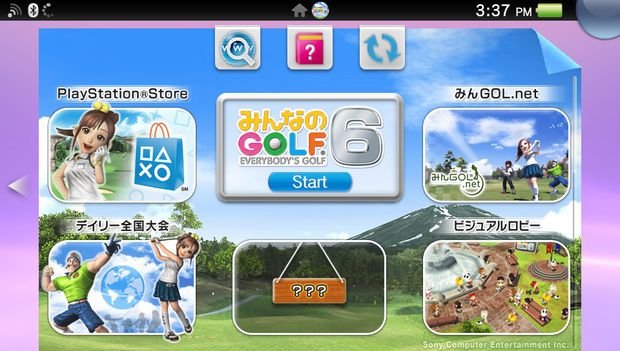 But can you navigate the UI with the controls?

No. Not at all. People seem to be really concerned about this, but I wouldn’t be. The touchscreen works really well. It’s super responsive, and each application has been tailored to work with your fingertips, so controller use would actually take longer.

The included Content Manager does all the heavy lifting. Sony has shut down the drag/drop file moving that we used on the PSP, probably for security reasons. This Content Manager isn’t bad, though. Simply run it, connect the Vita to a PS3 or PC with the included cable, and then use the Vita’s touchscreen to navigate through available file types to import or export files.. I’m not sure why.

I was able to pull over music, pictures and video from my PS3 to my Vita with ease. It works the exact same way with a PC with this software. As of now there is no software for Mac users, though Sony reports that a solution is in the works.

How does Remote Play work?

Nothing to get excited about here. Playing your PS3 on your portable’s screen works almost exactly like it did with the PSP.

How are system updates handled?

You can update via Wi-Fi, or through a connection to a PC or PS3. It’s fast and easy, which is good, as I’m sure there will be a lot of updates.

Is the PS Vita region-free?

Is the Vita backwards compatible with PSP games.

Yes. There’s no UMD slot on the Vita, so you’ll need to download these games from the PlayStation Store.

Is the Vita backwards compatible with PSOne games?

Not yet. It will be with an update. I’m sad to say that PSOne games are not supported with the launch OS for the Japanese Vita.

How much space is taken by games/demos/apps?

Sizes vary, of course, but here are some examples to give you an idea of what kind of memory card you’ll be needing.

Can you navigate the PS Store with the controls.

No. See the UI section above. No worries, though. The store has been redesigned to work best with touchscreen input. It’s actually easier than ever to navigate now, with menus and folders that let you flip through them quickly. 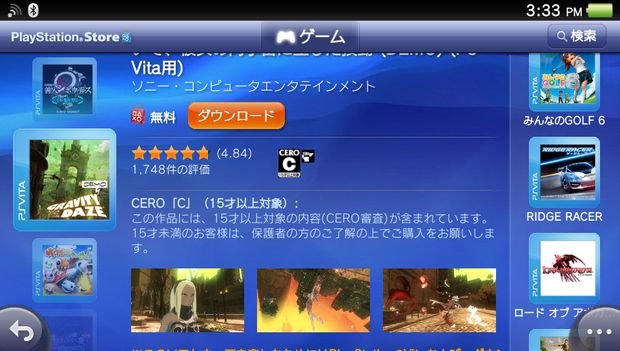 Are all the Vita games also on the PS Store?

Yes, and I love that. You don’t ever have to buy another cartridge if that’s how you’d like it to be. Just keep in mind that you’ll need huge memory cards for that kind of future.

Can you buy PSP games?

Yep, no problem, though you cannot download demos like you can on the PSP. See our oddities section below for more on that.

Can you buy PSOne games?

Not yet. Support for PSOne titles will come at a later date, Sony says.

What other downloadable games are supported? 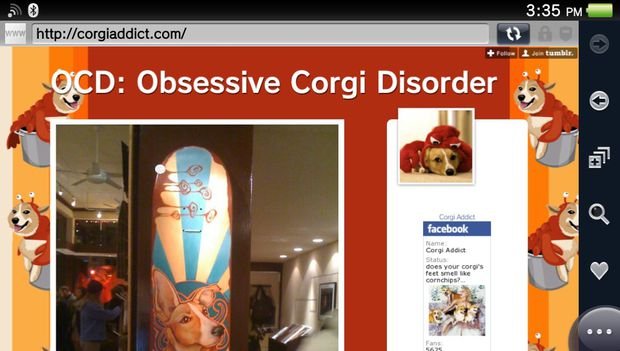 It doesn’t suck, but it’s not great. Let’s say that it’s light years beyond anything that Sony has done so far with portables. Still, it’s not great. It doesn’t do Flash, and it’s very slow. Sony is still a bit off from the speed you’ve come to expect with browsing on other mobile devices. Pages are found quickly, but the page rendering time is so slow that you’ll give up and pull out your phone instead. I can’t understand why all of the new, high-end technology under Vita’s hood can’t be put toward a better browsing experience.

Hey, at least the touchscreen works well while browsing. Oh, and the on-screen keyboard is great.

You can’t use the web browser while gaming.

Yep, and it’s not bad! Sony’s own LiveTweet is actually solid. It works a lot like a phone app, with pull down refresh, icons for all interaction types, and the really nice on-screen keyboard to type out your lunch selections or snarky observations between games. 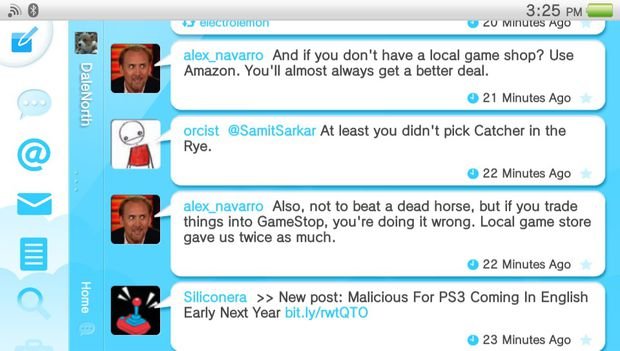 Is the music player good?

It’s good, though a bit basic. It looks really nice with its touchscreen controls and cover art. You can slide for song position, jump tracks, shuffle and even equalize the sound. The player can be minimized to run in the background while you use Vita’s other software

How about the movie player?

It’s a lot like the music player. Vita’s buttons and controllers do nothing in this player. Instead, you’ll use a floating control panel that lets you seek, search scenes and jump chapters. The touch controls are very responsive, so I don’t think anyone will have issue with not being able to use the buttons.

And even though we touched on this in the hardware feature, I want to say again that HD movies look fantastic on the Vita’s screen.

And the camera software, Photos?

It’s a lot like a mobile phone’s camera app. There’s control over both the front and rear cameras, focus, and even GPS sync capabilities. Too bad the cameras themselves aren’t great. 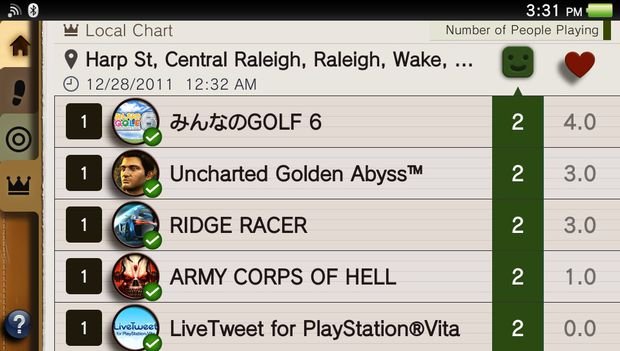 It’s hard to tell so far. My Vita has yet to find my location. It’s supposed to find your location and let you know if you have friends nearby that are playing Vita games. This lets you meet new friends by sharing game information.

It may have something to do with this being a Japanese model, but it says that I’m in Raleigh. Always. The program only lets you update your location every 45 minutes, so waiting around to try it again is troublesome.

I have been able see and share play data with other users. Too bad they’re not actually in my area. We’ll update this section when we get our hands on a domestic unit.

What are the friend features like? How is Party, Friends and Group Messaging?

Being the only one around with a Vita kind of puts a damper on this. We’ll come back to this when we have more Vita systems to test these apps out with.

What about other apps for Skype/Facebook/etc?

They are not available yet. There’s the Twitter app, one for Japanese video site NicoNico, and another for the Torne TV service in Japan so far.

What the hell is Welcome Park?

It’s a tutorial-style game that teaches you the Vita’s various controls and interfaces. You can earn trophies in this app! 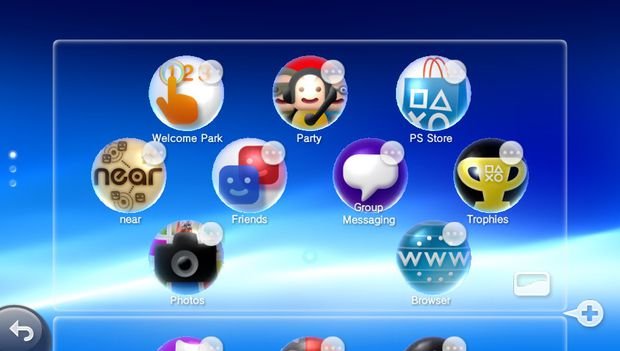 I’ve heard that you can only have one PSN account on the Vita at one time.

You’ll need to keep in mind that you’ll need more than one memory card to switch accounts, as each card is linked to a PSN account after signing up. It seems that Vita hardware needs to be linked to the same PSN account to work with these cards.

Can you set the system to English (or any other language)?

Sure. Just like the PSP, you can set the system language to any that you’d like. Just know that the games and some parts of the applications are in Japanese. The PlayStation Store stays in Japanese. Of course, this will be changed with the release the Vita in the United States next year.

Yes. Your game saves will only work on a system logged into the same account they were created with. 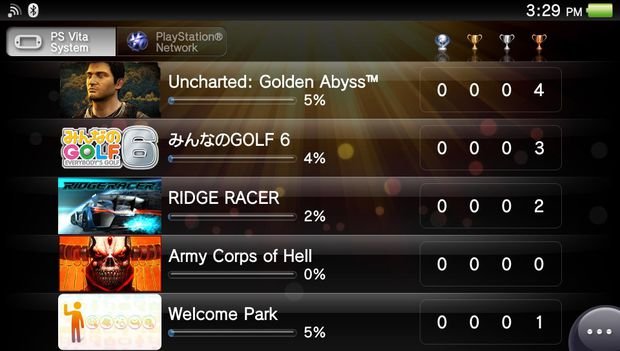 Tell me about Trophy support.

Trophies on the Vita work just like they do on the PS3. The actual Trophy application lets you browse through all acquired trophies on your PSN account, meaning that PS3 awards are displayed with Vita ones.

Trophies are linked to your PSN account and Vita hardware, mind you.

Can I use my PSP save files on my Vita?

Sure, though you’ll need to use a PS3 or PC to make this happen. You’ll need to first copy that save data from the PSP’s memory to the PS3 or PC. From there you’ll use the Vita’s Content Manager to copy that data over to the Vita.

Can you manage your system files and saves on the Vita?

But there are some games that save data on the PS Vita game card, says Sony. For those, you cannot copy or back up the save or application data.

Need more information on an application? Want to quickly delete it?

Holding down on any app’s icon will bring up a dialogue bubble that you can select to either delete the file or get more information, like file size and creation date.

Oddities and Other Neat Features:

Get this: The Vita will not play PS Store PSP demos. Yet.

I have no idea why. You can buy PSP games and play them on your Vita, but you cannot use the PlayStation Store’s PSP demos. You’ll need to keep a PSP around for that, unfortunately.

Demos do not show up on the Vita’s PS Store. I tried forcing a transfer of some PSP demos from my PS3, but the Vita refused them. 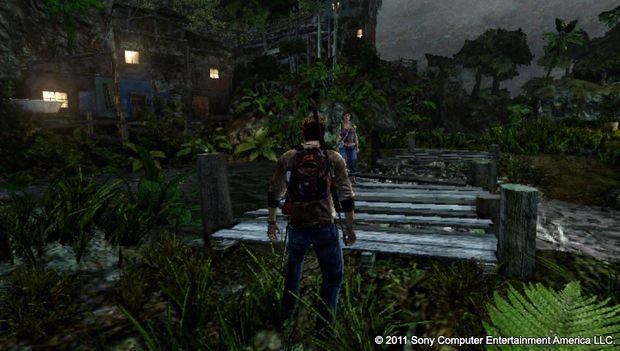 Does the Vita have a screengrab/screenshot feature?

Yes! Simply press the PS button and the Start button at the same time to save the current screen image to your photo folder.

When you take a screenshot of a game, the system automatically puts copyright information over your image. The image quality seems to take a hit (see above).

I found it on accident trying to use the above listed screengrab feature. I hit the PS button and the Select button instead and found that it brings up a quick panel that lets you control brightness, music volume, current music tracks, microphone mute and more.

I found out later that it was just me holding down the PS button that brought this up. 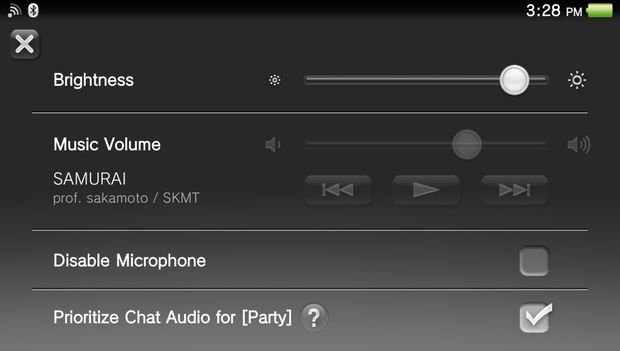 Isn’t that cool? No? Not really? Still, it’s an option in the settings menu.

You can charge the Vita via USB.

You’ll need to shut the system completely off (not on stand-by) to get a charge via USB.

You can mute the Vita by pressing and holding both volume buttons.