It’s been about one full year since we heard about Sony’s Next Generation Portable, and now it’s finally in the hands of (Japanese) gamers following its December 17 launch. We acquired our own Japanese launch PlayStation Vita unit to bring you our impressions. Today we’ll focus on the Vita’s hardware, with operational and software impressions coming soon.

To be fair, I would have been pretty pleased with some slight upgrades to the PSP, as it was my favorite and most-used game system. Sony has exceeded my expectations with the Vita, though. Sure, it’s bigger, faster and shinier, but the attention to detail really shows here, enough so that it almost makes you feel okay about spending $250 for the system.

Overall, looking at hardware, I don’t think Sony has ever made a better device. With the right games and support, the Vita could be a killer gaming portable. 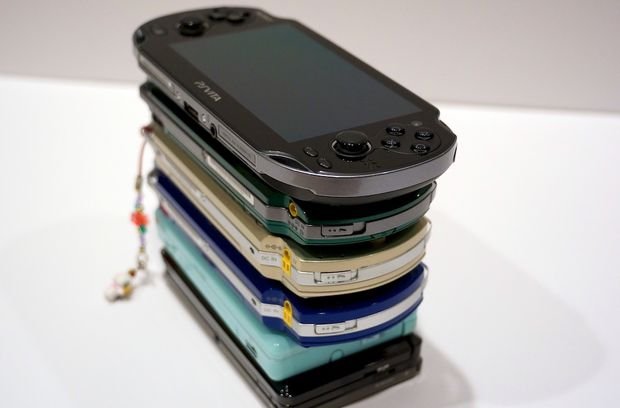 King of the heap, I guess you’d say. And yes, I have a Hello Kitty strap on my Champagne PSP. And yes, I’m a man.

The PlayStation Vita is pretty. You could call it an upgraded PSP, but Sony did so much more than just upgrade the specifications. It’s glossy on the front, and the rear touchpad is glossy, but it looks so sleek that I can’t complain much about its fingerprint-ability. The rest of the rear trim is matte black, and its beautifully rounded; even the rear of the unit catches the eye. The edge trim is plastic, but it’s metallic and glossy, which adds a nice bit of flair. Add in the metal top buttons and the smoked see-through plastic control buttons and you have one stylish, sophisticated looking piece of gaming hardware.

The build quality is beyond anything that Sony’s PlayStation division has ever released. The Vita is solid but light, sleek but hand-friendly, and somehow both flashy and subdued at the same time. There’s no give in the plastics anywhere, and you won’t find any unsightly seams. There’s no rattling parts or questionable creaks to be found. When you hold a PS Vita, you get the feeling that you’re holding a carefully designed, finely crafted electronic device.

So, in short, I really like the Vita hardware.

Most of these questions come directly from Destructoid’s readership, tested on a Wi-Fi model Vita. If you have any others pertaining to hardware, let me know in the comments. We’ll have other features on operational and software impressions soon.

This seems to be a major concern. We were also concerned at first, especially after seeing the Vita’s larger screen and added controls. It looks pretty big in pictures.

When I got my hands on an untethered, final retail unit, I was pleasantly surprised. The Vita is light, thin and easy on the hands. Even if it is taller and wider than its predecessor, it feels almost as light as the latest PSP. It’s also nicely balanced, with soft plastic grips on the back for your fingers, giving the system a great feel in the hands. The Vita is not heavy at all. I’ve played for hours and never felt the need to prop up the system or give my arms a rest.

Battery life. Should we be concerned?

One of those nerdy tech blogs will get you the exact numbers for battery life, but from a gamer’s perspective, I’d put it somewhere between “decent” and “just under enough.” It’s actually pretty respectable for a device with such a big, fancy screen. It’s better than my 3DS, and that’s just at the point where I’d call it good enough for me.

Informal tests had me going out and about with the Vita to see if I’d be looking for a power socket during the day. I’m glad to say that running out of juice was never an issue. With days of showing the system off to everyone I encountered, powering it on and off, and playing through many games, I still had some battery at the end of the day. I maybe had it on for three hours, which is about in line with what some of the initial reports are giving the Vita’s battery.

I spent one day indoors playing some of the launch games on the couch, and actually made it through a full day of on-and-off gaming without needing a recharge. I’m a high-brightness, high-volume guy, mind you. I didn’t time it, but I spent about an hour with four games. Not bad. Not great, but not bad.

All of this said, I’m sure the battery will die fast with 3G systems. We’ll let you know how that goes when we get our hands on a 3G model.

Note that the Vita takes a while to charge. One day they’ll invent a battery that will put juice in as fast as it comes out. 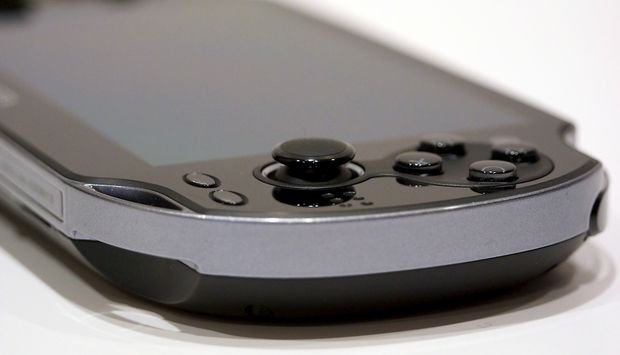 How are those dual analog sticks?

Beautiful. Simply beautiful. They’re short, smooth-moving, grippy but not sticky, and placed perfectly. The throw of the sticks is spot-on for a portable game system. These new sticks are the main focus of my excitement for the Vita. Again, they’re fantastic.

Attention to really detail shows in the sticks. The caps are soft, and held to my thumbs in every situation, from tense shootouts in Uncharted: Golden Abyss to tight powerslides in Ridge Racer. Under the tops of the stick you’ll find that there’s a flexible cover/barrier that looks like it protects the sticks from dust, pocket lint and the like.

I love how the sticks have a very low profile, letting you actually pocket the Vita. Keep in mind that you’d need a pretty wide pocket, though. 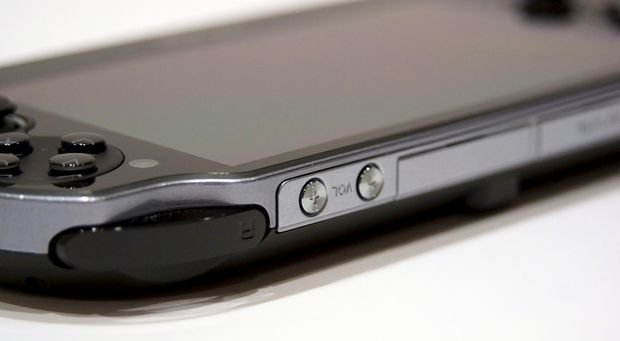 Nice. The face buttons are a bit on the small side, but they’re not slick, so they’re easy to keep your thumbs on. They’re very responsive and clicky, and they fall right under your right thumb in a way that it feels totally natural to mash on them. The shoulder buttons are clear and smooth, much like the PSP. They also have a bit of play, letting them rock back and forth a bit.

The D-pad is easily the best one I’ve used on a portable. Again, it’s placed to perfectly fall under your left thumb, mirroring the face buttons exactly. There’s a distinct clicky feeling at the indentations in all eight directions, which is great for portable fighting games and puzzle titles. It’s the opposite of the PSP’s mushy and soft D-pad.

Finally, the power and volume buttons on the top edge are solid and slick-looking. They don’t stick up from the top very far, so you’ll never accidentally hit them. The Start, Select and PS buttons are clear, and they sit flush with the front surface of the Vita. Again, nice work on that, Sony. You’ll have to use your thumbtip to push in on them, but they won’t be hit accidentally when gaming. That said, game makers should not assign these buttons to action functions. 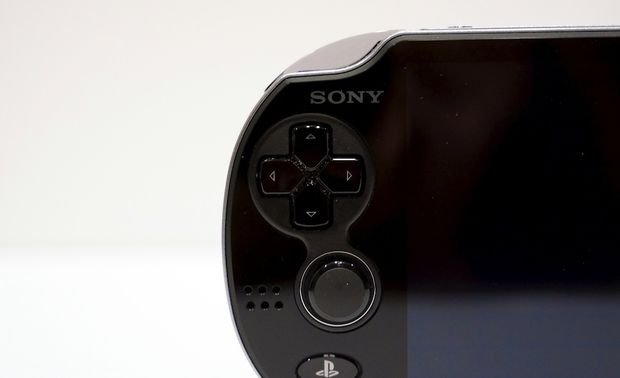 Is that screen as pretty as they say?

Yes. Oh yes. This 5-inch OLED is running at 960×544, which means that it’s about four times the resolution of the PSP. This thing is bright, colorful, and very impressive. Vita games are lovely on this high-resolution screen — screenshots do it no justice. The image quality always is punchy and vivid, and video is deep and detailed. Video and game content positively shine on the Vita. I’d go as far as to say that this screen is going to change the way people think about portable gaming systems.

I’ve had no issues with glare so far, despite the glossy screen.

This is nitpicking, but my dream portable screen would have a bit more brightness for outdoor play. But really, who goes outside anymore?

And that’s a touchscreen?

It’s a good capacitive touchscreen. Like, iPhone good. Tapping, swiping, and flicking have all been free of issue. Some devices have you poking repeatedly for input, but you won’t have to worry about that with Vita.

How about that rear touchpad? Is it hard to use?

The rear touchpad is pretty neat. I’m impressed at how accessible it is. At first I was concerned that it would be difficult to both hold the system up and use the touchpad at the same time, but it feels totally natural. The Vita is light enough, and the rear grips are sufficient enough that using one or both of your hands on the touchpad feels right. 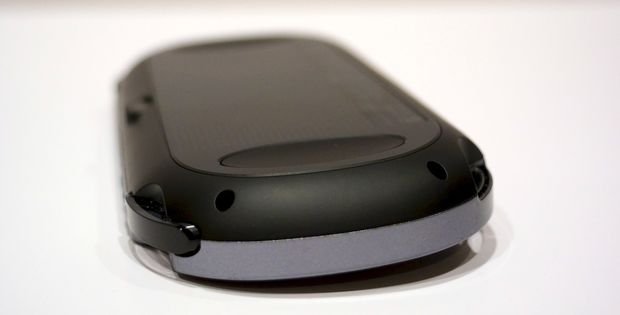 I bet the cameras aren’t anything special.

You’re right. Nothing fancy. They’re sufficient, and are even capable of serviceable low-light photography. Expect grain and blotches; both the front-facing and rear cameras use low-resolution sensors. They’re for putting your face in games or for overlaying graphics on your environment, not for studio photography, so don’t expect to make prints from these.

Is the Wi-Fi good?

It’s really good. I haven’t had any trouble hitting my wireless router. I visited a house using Verizon’s MiFi unit for Internet connectivity and had no issue with that, either. In fact, my initial setup found my neighbor’s wireless router, and he lives two streets away!

They are small. There are just six little holes for sound on each side of the system, positioned right next to the analog sticks. They’re not going to blow you away with sound, but what does come out of them is crisp and clear. Loud? Not really. There’s nothing in the way of low end at all coming out of these speakers, but they put off a surprisingly wide stereo sound field. 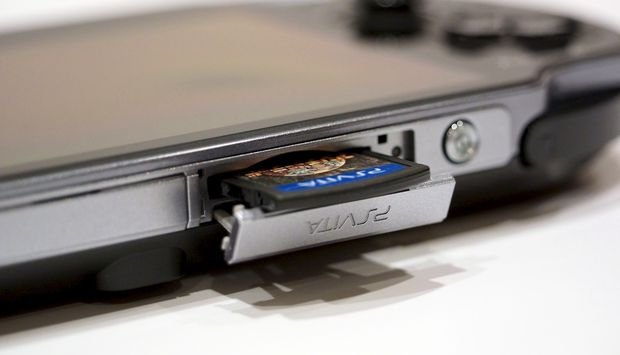 This is just about the only time Uncharted: Golden Abyss has come out of the game slot

Is there anything you don’t like about the build?

Not really. I think Sony nailed it. I’ve been flipping this system over and around trying to find something to knock. I can’t find anything of note!

Those with fingers of the sausage variety may not like thumbing open the compartments that hold the memory card and game cartridges, as they’re pretty small. It should be noted that you’ll rarely need to do this if you have mostly digital content.

These same thick-fingered people may find that the base of their thumbs touches the tops of the analog sticks when using the digital buttons and D-pad. You’d have to have pretty stumpy thumbs to have this issue, but it is possible.

But what about the non-removable battery? Don’t you hate that?

There was a time where I would have hated that. These days it seems like a silly thing to complain about. How many batteries have you gone through with your other rechargeable game systems with removable charge packs? My PSPs, DSes and other systems are still using their original battery, as I’m sure your systems are. And with phones, tablets and even computers now shipping with non-removable batteries, I’m not too hung up on the Vita’s situation.

Yeah, you’re going to want one of these things. Yep. Even if you’re one of those who can’t quit telling us about how you always have to dust off your PSP and recharge it after digging it out of the bottom of your closet, you’re still going to want one of these. Actually holding it and playing it is knowing. Except for maybe the battery life, I feel like the Vita is pretty close to what gamers have always wanted from portable hardware.