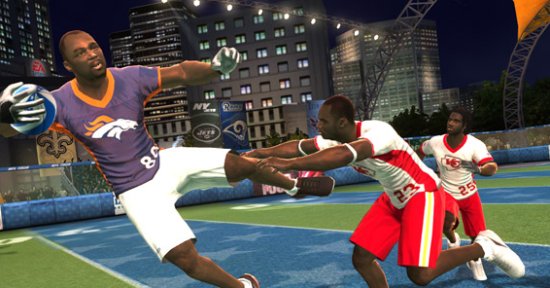 This week’s PlayStation Network update sees the store playing a bit of catch up with its rival service. With Sony having taken last week off due to the holidays, much of this content is going to look familiar to those who were paying attention to last week’s Xbox LIVE updates.

Guitar Hero III: Legends of Rock gets six songs this week; three as single downloads ($2.49 a piece), and three bundled together in the form of a “Warner/Reprise Track Pack” (featuring Linkin Park, Mastadon, and The Used for $6.25). Rock Band receives two weeks of its weekly content, with eight songs, ranging from $0.99 to $1.99. And EA continues its tradition of selling you content you could unlock on your own, allowing you to purchase in-game cars for Need for Speed Pro Street.

On the demo front, EA does come through with a close to 1 gig demo download of NFL Tour ’09. The next-gen iteration of the NFL Street series, this demo should give you a good idea of what the game will be like when it hits the shelves next week. What you won’t be playing this week is Gran Turismo 5 Prologue … but the Japanese are! Sony rubs it in your face with this week’s video, the Japanese launch trailer for Polyphony Digital’s racer.

Full details after the jump.