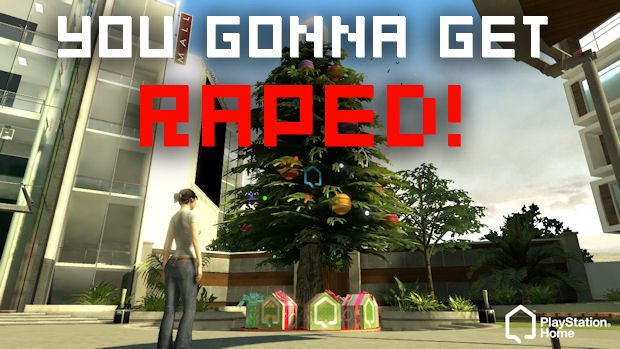 Sexual assault is not funny. Sexual assault in PlayStation Home is hilarious. This is a truth we have all come to accept, but one PS3 user believes it to be serious business. Claiming her roommate was “sexually assaulted,” PSN member “Whoef” is seeking a restraining order on a fellow Home fan.

In what is probably the best sentence you’ll read all day, Whoef claims that her friend was “Sexually assaulted near the Festive Tree while she was helping others with the puzzle … She would move and the harasser would follow, each time trying to get behind her and use the crouch gesture. This apparently went on for some time.”

The complainant wants a virtual restraining order to keep the two players apart, and has also suggested a “Home Jail” where these “future rapists” can be locked up and spend their time harassing each other instead of other people.

“If the harasser has a string of victims, then let them find themselves all alone or better yet, only with other harassers,” suggests Whoef. “There is no reason Home can’t make money on future rapists. After losing all their items, like a real jail, Home can sell them orange jumpsuits, flip-flops and they can decorate their jail cells with a few items such as bunk bed, toilet and a bed roll. They might as well get use to it, that’s where they are headed if they don’t change their criminal behaviour.”

The actual “victim” of this “attack” has declined to comment, but Whoef says she is undecided on whether or not to return to Home. In brighter news, this is the only entertaining thing to have ever come out of Sony’s virtual world.