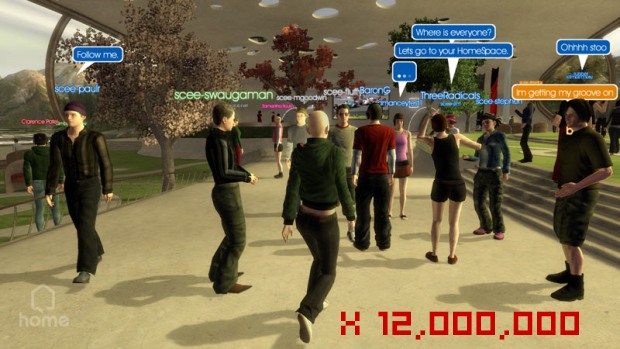 Despite creeping me the f*ck out PlayStation Home is growing, and growing quickly. At GDC this year Jack Buser kicked off Sony’s final day at the convention talking about PlayStation Home. This is an area he should know plenty about since he is Home’s director. He opened the talk by telling the crowd that Home now had 12 million users, and that 85 percent of them returned more than once to the game program MMO thing. In fact that number means that the userbase for Home has doubled since last year and grown by 2 million since December. Guess those PS3 sales really are up.

The rest of Buser’s talk was primarily about how developers can make better in-Home games, but he did mention that we would be seeing a lot more Home/game interaction like inFamous had. “It’s [Home] an Incredibly important part of [Sony’s] strategy,” he noted.

I’ve accessed Home twice since I got my PS3, so I suppose I am technically in that 85 percent of people who are not one-offers. It was creepy and strange and I didn’t go back. However, if this is going to be a truly big part of the Sony platform I may have to force myself to enjoy it more, but until the time I feel I’m actually missing something I’ll be steering clear.