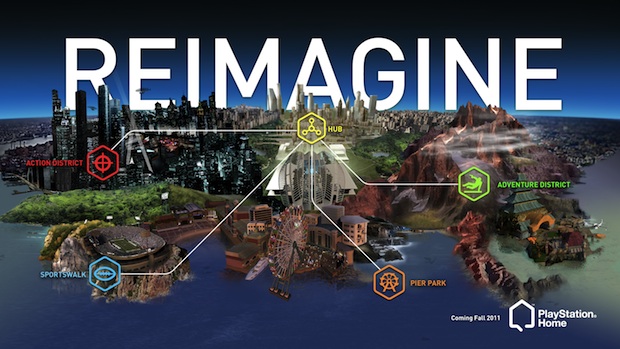 PlayStation Home will see big changes later this year. Sony is working to overhaul the focus completely, changing Home from a virtual world experience to a game world, pushing it forward as a social games platform. Last week I spoke with PlayStation Home Director Jack Buser, and he was kind enough to run down the huge list of changes for the service, set to take place this fall.

Instead of being a virtual place to hang out, this overhauled PlayStation Network is more like a world of games. The idea, Buser says, is to get away from the idea of chatting in an empty room to unifying users over games. Like Disneyland has different themed lands to explore, Home will have different genre-based districts that are separated by game type, allowing users to head directly to the zone that fits their mood and interests.

The Action District will have a gritty, urban feel that will look like an FPS level. Buser says to expect shooters and other games that have the same level of intensity. Pier Park is more casual waterfront locale, complete with a ferris wheel. It will be populated with arcade titles, puzzlers and carnival games. Sportswalk will have an outside-of-the-stadium feel and will feature streamed scoreboards and highlights to accompany the area’s sports titles.  Finally, the Adventure District will look like a lush jungle and will house role-playing and adventure games.

The central area, called the Hub, and these four districts will be populated with several different types of games. Buser says we can expect free-to-play titles, much like you’d find on social networks like Facebook. 2D, web-like titles will continue to find a home in Home. This means that users will see games games with purchasable items, freemium titles, and ad-sponsored games. As you’d expect, micro transactions to upgrade items or abilities in games will be available. 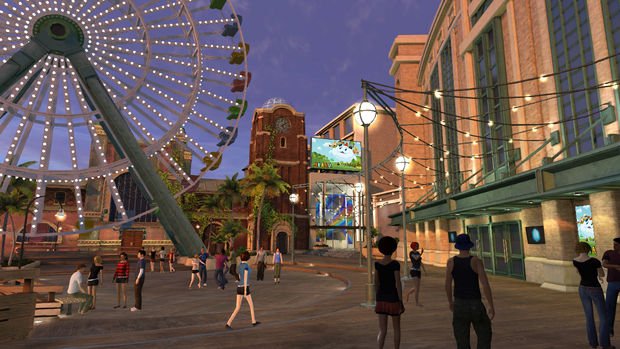 Buser says that they are also working to apply this business model to core games: “We’re actually applying this to core, console game types. We’re applying this to FPSes, online multiplayer racing games and shooters and the like.”

The redesign focused on making the Home experience faster to get into. Users will arrive at the central transportation Hub, which replaces the current central plaza. From this Hub users can choose which district they would like to visit and explore. The client will also be upgraded in an attempt to improve get in time. Buser tells me that this new client 1.55 has been reworked to minimize the time it takes to actually get into the game. 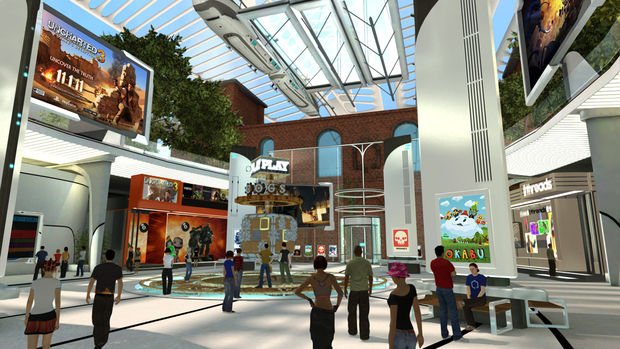 A new Activity Board at this Hub will also list quests that will make PS Home itself a sort of game. Users can pick daily quests to work towards to receive rewards that can range from free virtual items and spaces to full games.  This gamification of Home is deeper than simple fetch quests, though. Buser says that the they can actually build complex, narrative, branching quests that could last months.

“For the very first time Home is going to have a sense of persistence. It’s going to remember the decisions that you’ve made in the past and can alter the experience based on your decisions or your performance.”

For current users of Home, know that the heart of the experience hasn’t changed. The basic framework of Home is going to stay the same, so users will still be able to enjoy the current games, locations and purchases. “People that want to continue to interact with Home the way they’ve done in the past can continue to do so,” Buser stressed. 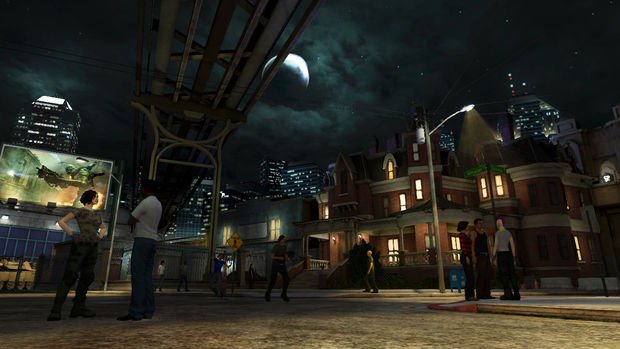 Some smaller upgrades to Home will make for a deeper experience.The event system will now open up event creation to the community.  Users will be able to promote their own events to their friends alongside Sony-run events. Home will further explore Total Game Integration (TGI), which will let actions in Home unlock features in full Blu-ray game releases.

“The goal here, behind all of this, is to elevate games on the platform and really reinforce the evolution of home from a social network to a social game platform, and to really get people to come in and start playing games.”