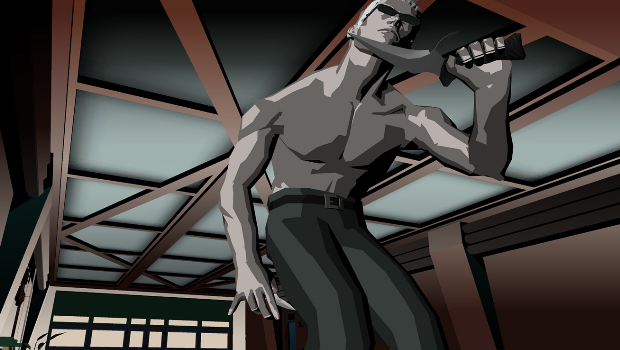 … Who am I kidding? We all had those thoughts.

“As has been announced, Grasshopper Manufacture will make games for PS4, as will GungHo Online Entertainment and Acquire,” wrote Suda in his Famitsu column. “I can’t go into detail at this stage, but for sure the new challenge is exciting.

The Killer7 director is also big into cloud gaming which, while suffering from some obvious flaws, is something he sees as becoming the norm in due time.

“I think that in the future, cloud delivery will become totally commonplace,” he said. “Social networking has certainly done that. To be able to play anywhere, on any device, with shared data –this will be an alluring new feature for games. You’ll have your own personal profile or ID that you can access from many different devices and enjoy your game from anywhere, in various different ways.

“That this play style will become a reality is futuristic enough. But in addition, cloud saving becoming standard practice is an evolution in itself. It will add new value and will surely result in new ways to play. Thinking about the future of this stuff and then constructing and outputting something appealing is our job as game designers, and from that challenge we can take new strength.”

It’s good to see Suda all horned up for the cloud future, though I certainly have my own concerns. It seems to be taking us one step closer to a world where we truly can’t even trick ourselves into believing we own our games anymore, and I worry that such a world will be exploited and abused by companies already proven to utilize what it can to control the end user.

That said, there are benefits to. The option of cloud saving has kept my progress in a number of titles during a number of hardware changes, and the PS4 definitely has some exciting plans with regard to game streaming. As with any new idea in the game industry, I think very cautious optimism is really the wisest attitude to have.