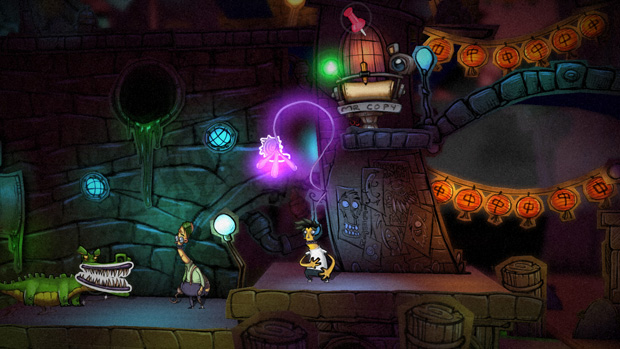 You can tell everybody

I have not played the funny mind-reading adventure game Stick it to the Man! yet. I should. Ian gave it a 9.5 out of 10, the maniac! After well-received releases on PlayStation 3, PS Vita, and PC, it’s now making its way to PS4 — on April 30 in the UK, and May 6 in North America. A Wii U version is also planned for late spring. You may just want to hold out for that one, honestly.

Stick it to the Man! will embrace 1080p and the DualShock 4’s built-in speakers on PS4, developer Zoink Games has confirmed with Eurogamer. Bit of bad news, though: “The game will not be Cross-Buy with the other versions [PS3/PSVita], but this will be reflected in the pricing. We’ll be releasing pricing and promotional discount details closer to launch.”

I mean, I don’t even own a PS4, but it’s stories like this that remind me I could and probably should be playing one of the several currently available versions. Damn Man, always bringing me down.

Stick it to the Man landing on PS4 this month [Eurogamer]