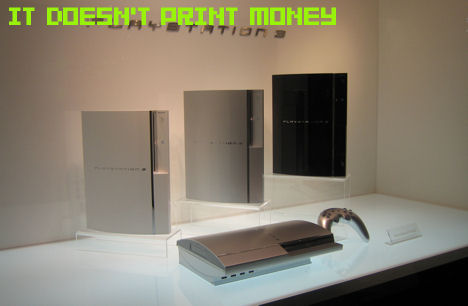 Acclaim boss David Perry has stated that Sony has no chance of making a worthwhile profit from the PlayStation 3 after selling the consoles at a loss. Putting the cost of the PS3 into perspective, Perry claims that Sony has lost more money on the system  so far than it made during the PlayStation 2’s entire five year sales peak.

“Because of the cost of making the PlayStation 3 and because they sold it at a loss, Sony basically has pretty much no chance of making money on the PS3, because it’s lost more money than they made during the entire peak of the PlayStation 2 – it’s not going to happen again for Sony,” stated Perry. “If they release the PlayStation 4 and have an even more expensive console and raise the cost of games by ten dollars, that would not be good.”

Perry also suggested that Sony’s famous “ten-year plan” was merely a way for Sony to claw back development costs — that the company has been forced to make the PlayStation 3 last ten years rather than do so out of pure choice.

David Perry, of course, is a fool. Everybody knows that once Home is released, the PS3 will sell eighteen thousand million billion PlayStation 3 consoles in America alone. The reason for the ten-year plan is because it’ll take a decade for Home to be released.