[Editor’s note: SurplusGamer takes a look at the difference between playing Left 4 Dead on Steam and Xbox Live for his Monthly Musings. — CTZ]

I’m not an avid multiplayer gamer and so despite having bad experiences with playing Team Fortress 2 and a few other games on Xbox Live, I really didn’t expect it to live up to the negative things I’ve heard people say about it. I knew just as well as anyone the particular kind of idiot you get when playing with random people on Live but equally I found myself quick to defend:

“Sure, those morons exist, but they must exist on PC, too!” I’d insist and I’m sure it’s at least partially true.

Recently, though, I’ve had a chance to put this to a real test. After weeks of playing many public matches of Left 4 Dead on Steam, I got the chance to play it on Xbox Live for the first time over Christmas. Hit the jump to see how the experiences compared. 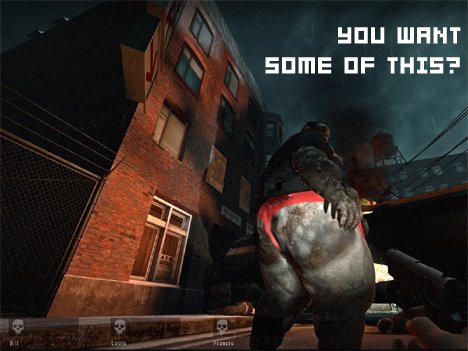 My very worst experience of playing Left 4 Dead on Steam is as follows:

Some random player on my team started to shoot me. The rest of my team turned on him, we dealt with him and moved on. That’s it. Apart from that I’ve played with many players of very variable competence but they all at least seemed in tune with the idea of killing zombies and getting to the end, even if they were a bit bad at doing it.

Now, you probably know where I’m going with this but let me describe my first three public games of the same game, Left 4 Dead on Xbox Live:

Game 1 – No Mercy
Random guy on my team starts shooting me as soon as I join the game. I shoot him more. I leave, hoping for something better.

Game 2 – No Skills
Two guys at the beginning of No Mercy versus mode decide to start the game by dancing about on the edge of the roof. They both panic when a Smoker and Hunter go for them and fall off the roof. They die before even leaving the first area. I quit in a fit of disbelief.

Game 3 – No Longer Surprised
I get some advice from the Destructoid IRC channel that playing Campaign works out better with randoms, so I start one of those games. There are two friends making up one half of the team. They start shooting me and the other random and we can’t vote to kick them because we’re not a majority. The following conversation ensues:

Subsequent games have, more often than not, had similar results. I’ll grant you that this experiment hasn’t been exactly scientific but it’s at least some fairly strong anecdotal evidence that all the bad things that people say about Xbox Live gamers have at least some basis in fact.

Why the big difference? Is it a simple case of demographics? Is it simply that those who play on Xbox Live are far more likely to be whiny thirteen year old homophobes with no interest in actually playing the game? I suppose it’s possible but I know from the non-public games I’ve played on Live with you good Destructoid folks that there are plenty of people out there with the will to play these games properly. Not just that, but I know so many people with a 360 and none of them would act in this way. Why I don’t encounter this kind of person even half the time I’m playing remains a mystery to me.

Ultimately though, it’s a shame for the 360. I still defend people’s right to prefer playing on consoles to PC and consider elitism about either to be pretty short-sighted. Both have their advantages and I use both for different types of gaming. Other people have their own preferences and that’s okay too. That being the case, I’d love to say to someone who is considering buying a game like Left 4 Dead “Go for whichever version you’re more comfortable with.” Instead, though, it has to come with a caveat: “Choose whichever but if you choose the 360 version, don’t expect to have many good games on public servers.”