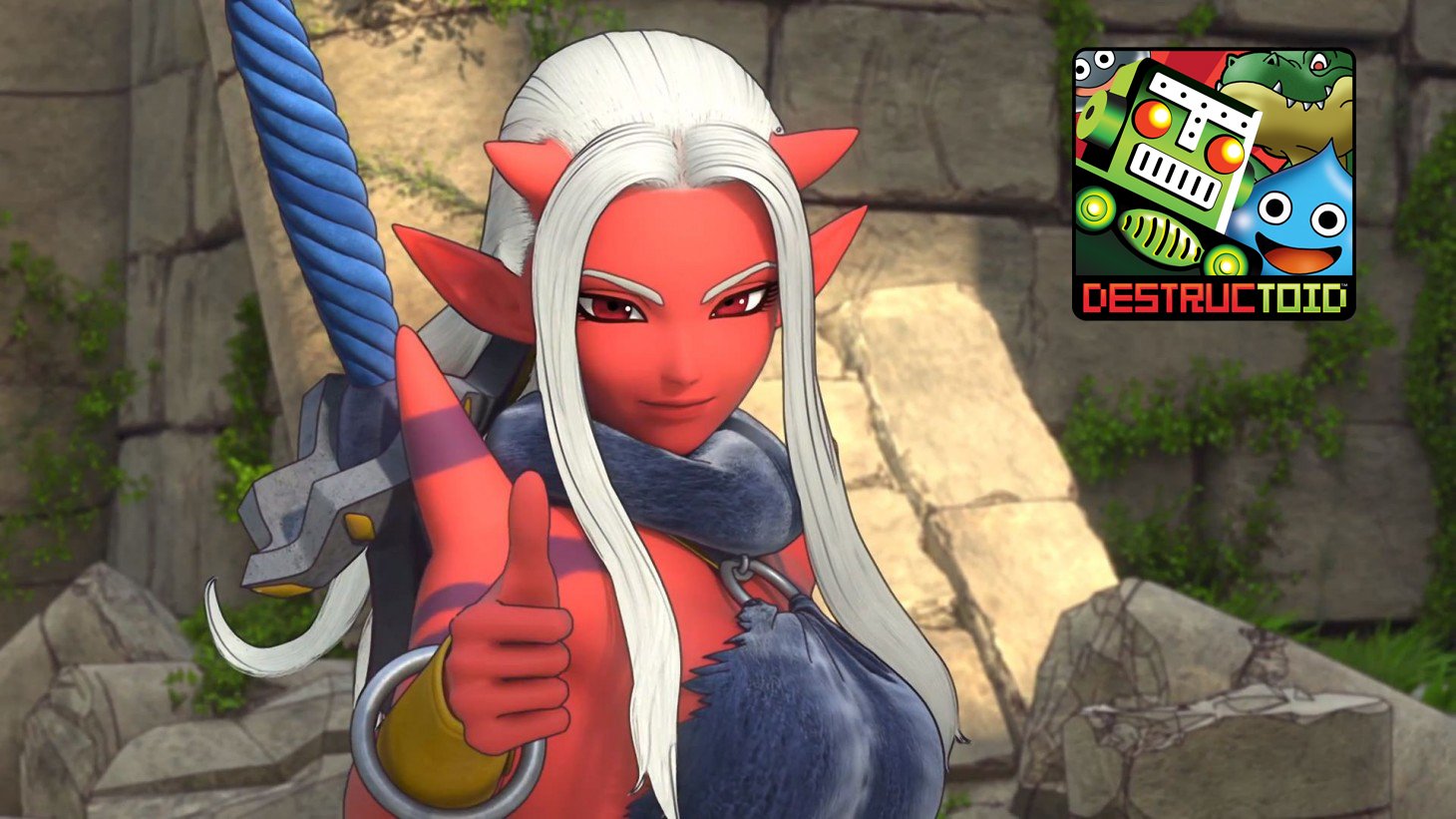 A labor of love

My time in the hospital while my wife was having our new baby was long, dull, and full of Dragon Quest VII. I bought the game at launch for the 3DS and it took a year and a half to beat. I took my time with it, and many breaks in between, but eventually finished off the end boss in just a few punishing moves having mastered the major classes for my party (and sporting some really good gear to boot).

Actually, it’s the only Dragon Quest game I can say with any honesty that I have completed start to finish, and even that is a bit removed from the truth considering I have not yet exhausted the post-game content. DQ games are time consuming affairs, and DQVII is one of the longest in the series. Yet I still consider myself a diehard series fan, seeing as I own and have at least played all of the numbered Dragon Quest titles.

In a few days, the eleventh entry in the series will make its way to our shores for the PlayStation 4 and PC and will likely help to shape the future of Dragon Quest in North America. Apart from DQVIII which did well on PlayStation 2, it’s difficult to tell just how successful the games are here since sales numbers are not readily available. When the Nintendo Switch was announced, I was hoping for one thing; an announcement of Dragon Quest X on the platform, the only game in the main series that’s never been localized. Originally released for the Nintendo Wii in 2012, it is now on its fourth major expansion and has since been ported from the Wii to numerous platforms including the PC.

With no localization in sight, I got sick of waiting. I signed up for the game, played through a couple of key story moments, grinded a character up to level 40, and struggled my way through the obvious language barrier, meeting some interesting people along the way. Make no mistake; despite being an MMORPG, DQX is absolutely a mainline Dragon Quest game, with the same flow of narrative, interesting locales, and familiar Akira Toriyama character designs and monsters the game is known for. And I can honestly say that we are missing out on an interesting, if not completely essential, chapter in the main series.

Major heads up: jumping through the many technical and financial hoops required to enjoy the game is not for the faint of heart. The game is fully Japanese, is region locked, and the community of English speaking players is exceptionally small — perhaps a dozen or so “active” members who are never on at any one given time. A VPN is required which is much easier to configure on a PC than PS4, Wii U, or Switch, and you will also need either a Japanese credit card or a way to buy “Crysta” from the Square Enix Japanese website to pay for a subscription and a digital copy of the game.

I opted in for a physical copy of the game which came with 20 days free, shipped and sold from Amazon Japan. There are numerous guides available on DQ fansite Woodus, but many are completely out of date or unintelligible due to Japanese characters no longer displaying properly on the site.

Without understanding many of the story beats due to the language barrier, I was able to piece together the basics. You start out by building a human character and playing the offline portion of the game: a single town, dungeon, and boss, wherein the game is functionally identical to every Dragon Quest ever, right down to requiring that you save at a church lest you lose your progress. You grind to level 10, fight a boss battle, and then some exposition occurs, evil is unleashed into the world, and the fabulous introduction plays. At this point, you are resurrected into the body of a fallen warrior. You will choose a race from one of the several available, including Elves and Orcs (with their own unique Dragon Quest twist) and you will be introduced to the game and world proper, the online mode. 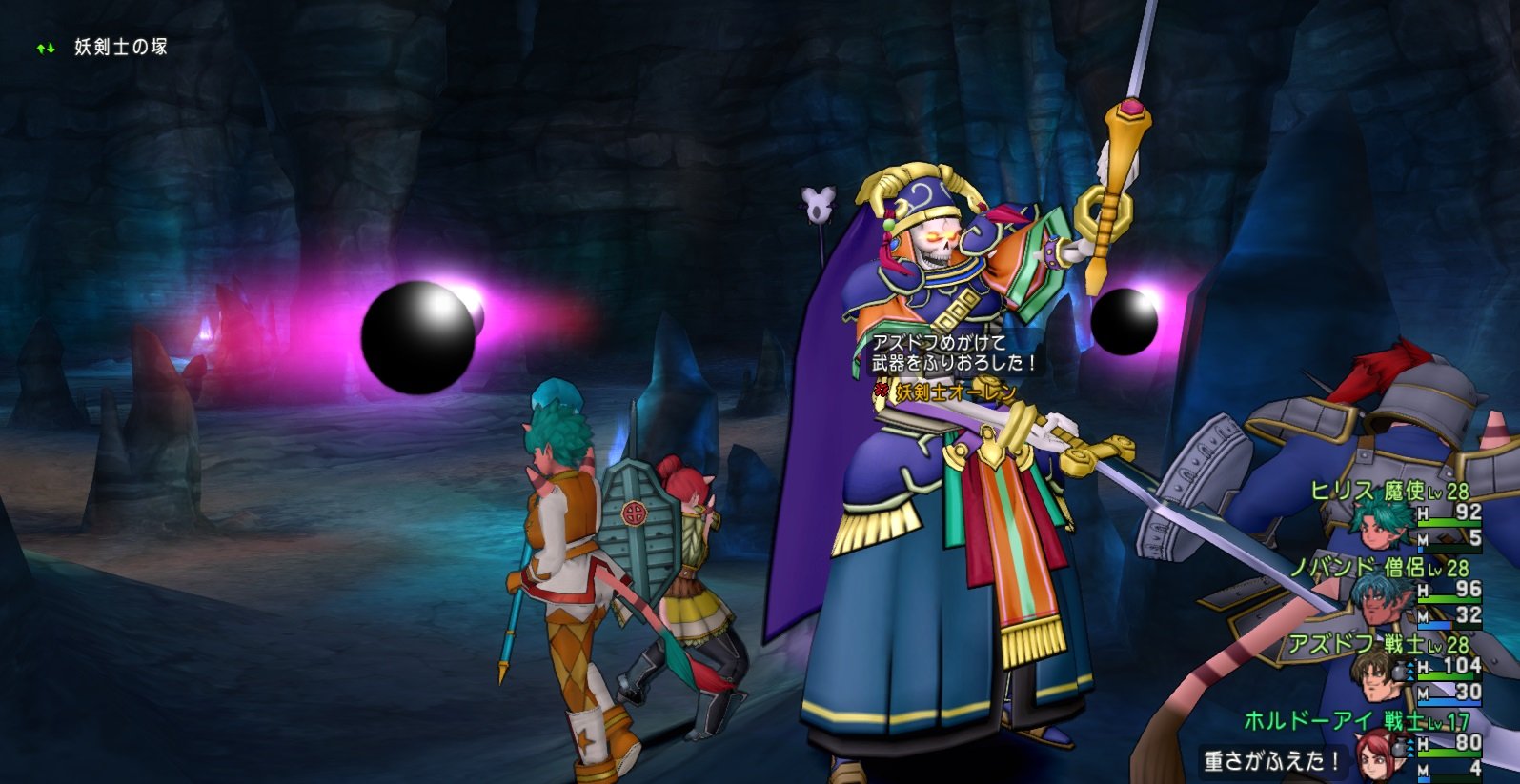 At this point, the narrative has you going on a tour from town to town via train to perform major deeds where you’re rewarded with emblems. Once you collect a certain amount, you can move on to the final boss of the game. I have collected two emblems so far and put about thirty hours into it. Being broken into large zones in a similar manner to Final Fantasy XI makes for slow travel, and definitely feels unique compared to older DQ games, but if you are familiar with Dragon Quest IX (or even the upcoming DQ XI) Dragon Quest X is not too dissimilar from those.

You can easily solo the initial story content by hiring a party of powerful NPCs without ever having to team up with another player. Dragon Quest X is entirely turn-based, although your character has full mobility to run around in battle as positioning is important. A well-rounded party is essential to survival, especially a good healer, and the major quests are the meat of the game rather than hundreds of fetch quests that you would normally see filling out the bulk of most MMO experiences. The story is key, and there is a ton of dialogue and character interaction. Although I was able to figure out menus and key locations due to some arduous translation tools and guides, I did not experience the game proper as I could only disseminate some particulars in the narrative.

Oh, and the best part, like all DQ games, is the casino. I don’t want to talk about how much time I actually spent there, and how addictive the slot machine was this time around, where other players participate in boss battles if they are connected to the same pillar of machines you are playing on, and the major payouts it provides. The casino is on point. It was about half of the fun for me. And I never want to go near it again. 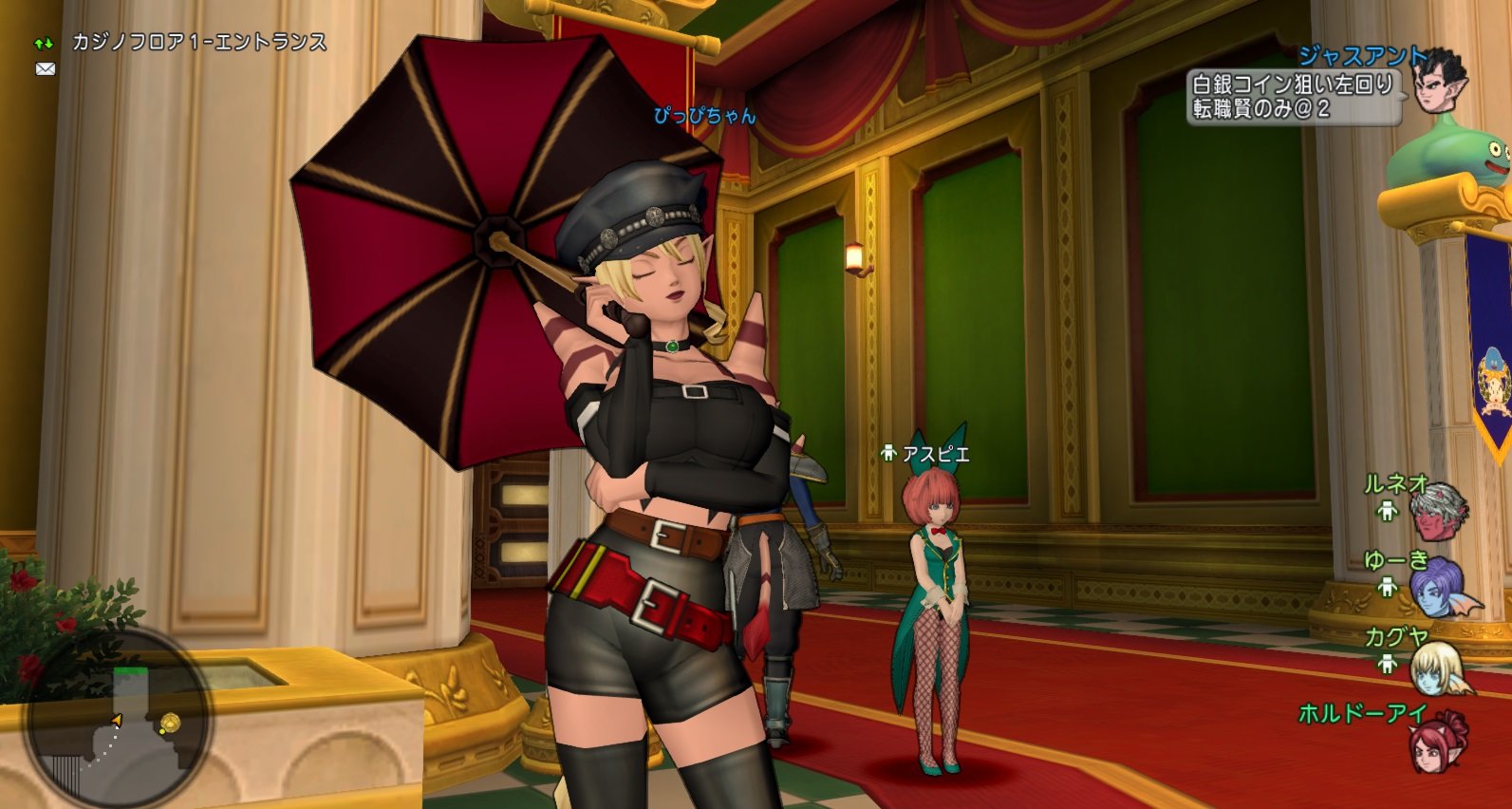 Back to the narrative; I have it on good authority that it is really, really good. Long-time Dragon Quest fanatic and the leader of the Dragon Quest X community as it exists today, Cranberry is a member of the Dragon’s Den (not the show) forums and features prominently in the majority of Dragon Quest X YouTube content in her voluntary role as a guide. Although our schedules do not match up in the slightest, I was able to sit down for an interview with her in-game to chat about what makes DQX special, and her thoughts on the series as a whole.

I first asked her how she got into Dragon Quest X in the first place.

I had previously played Phantasy Star Online Episode 1 and 2 on the Gamecube. That game ended and I was now on the Wii and read about Dragon Quest X and that it had an offline mode. Being a Dragon Quest fan, I decided I wanted to try it and got myself a new Wii specifically for Dragon Quest X expecting to only play the offline mode of it. And for six months I was indeed offline only on it. I knew some basic hiragana and katakana but had almost no fluency in the language aside from a handful of simple phrases.

Cranberry has seen the userbase fluctuate quite a bit, with under two hundred members on the forums interested in DQX. There is very little player retention. Her and YouTube channel ProjectCOE, which features an extensive and ongoing playthrough of the game, are probably the most dedicated players, and while I was in the game, I ran into another user called Nawaria on a nightly basis. Most of Cranberry’s friends in game are made up of more technically adept users, programmers and software engineers and the like, who are comfortable dealing with some of the technical hurdles the game has.

I then asked Cranberry if she feels like DQX is even worth bringing out here and localizing.

DQX has a story that has compelled me more than any other game in the series. I very much see it as a real Dragon Quest game. It stays as close to the traditional experience as an MMO can. The battle system is very easy to learn as it’s so close to the original games. The main difference being it happens more in real time. The question of would it be worth bringing West is a more difficult one. As a fan, I absolutely want it to come to the West. But at the same time I understand that paid MMO subs are difficult enough as it is to sell in the West and the series has never been big here. It would be hard for me with a straight face to say that if they brought this to the West it would be a success.

I agree with her; Dragon Quest has always been a tough sell in this market. DQX is a juggernaut, and slow as the day is long. As a DQ fan, it’s a wonderful little playground of the best elements of the series. But for new players to adopt an MMO long after the age of the MMO has effectively passed, and one so different than what is expected seems like it would be an unlikely hit. 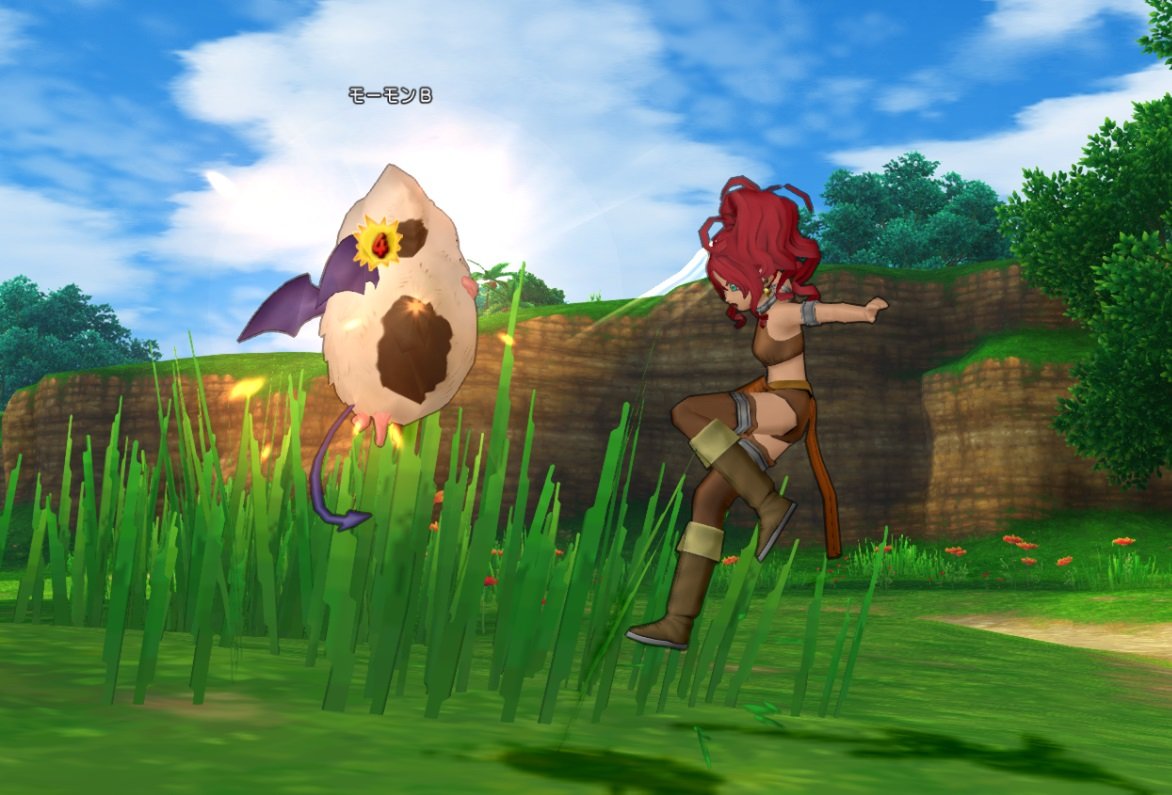 Somewhere in the middle of our interview, a Japanese user named MeiMei who had some decent English knowledge joined us. Cranberry went on to explain how the game had affected her more personally, and her experience with the Japanese userbase, who she commonly interacts with.

For me, Dragon Quest X has not only been a compelling story and Dragon Quest game, but an enriching social experience as well. In addition to enjoying the in game lore and playing with friend, even interacting with the Japanese players has been a good experience. I have learned a lot about the culture and found that they have been just as curious about me as I am of them. Many have been eager to share their culture with me. I even had a whole group of them get together to throw me a surprise birthday party here in the game. The people are a part of the experience.

MeiMei and Cranberry are friends outside of the game after interacting with one another for some time, and although they have never met, they send one another Christmas gifts. MeiMei told me she is not surprised about there being some English players — we are all the same, she said, once we enter the world of Dragon Quest. Everyone is there to celebrate a common love for the series and the colorful, optimistic world it portrays. 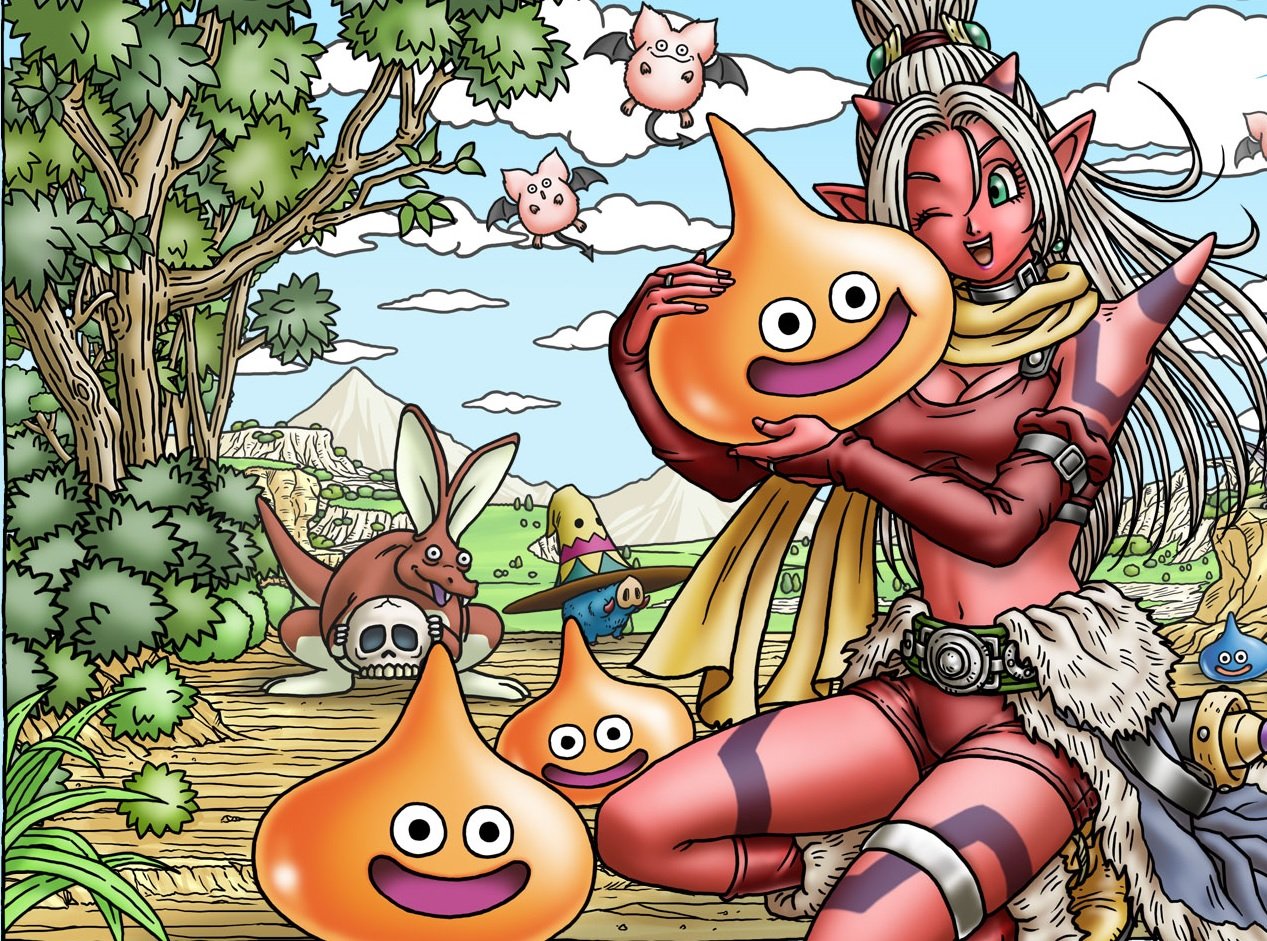 My time in the world of Dragon Quest X has been sparse since sitting down with Cranberry. Like many other players, life has gotten in the way. It was wonderful to experience the game in whatever limited way I could, and as a DQ fan, I do feel we are missing out on a unique experience. Whether Square Enix will ever decide to localize it, only time can tell, and it may depend on the success of Dragon Quest XI. But if you are willing to jump through some hoops and be as patient as Cranberry, there is a potentially enriching experience available to explore in Dragon Quest X — even if you aren’t from Japan.