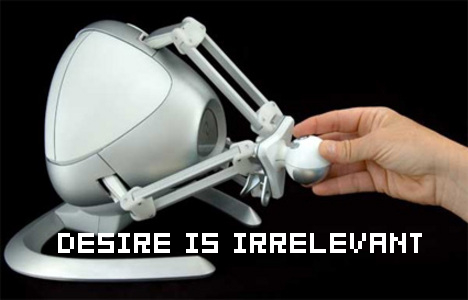 On August 4, 1997, Skynet went online, and shortly thereafter it became self-aware. Thankfully, John Connor saved humanity from the possible nuclear oblivion that would have been wreaked by Skynet and its army of cyborgs. This new machine, the Novint Falcon, looks just as formidable as a mimetic polyalloy cop with a funny gait, but instead of traveling back in time to kill, it merely functions as a 3D videogame controller.

The Novint Falcon can simulate every semblance of 3D space, as Niero explained at CES in 2007. It also has room for attachments, to make the gaming experience more refined. The Novint Falcon is manufactured by Novint Technologies and carries the heavy price tag of $239, which doesn’t exactly make it the most affordable robot for the doomsday enthusiast with a budget.

Upon release, the biggest problem with Novint Falcon was its lack of support by developers.  That issue is no more, according to 1UP. On Thursday, Valve announced that it would support the Falcon with Half-Life 2, Team Fortress 2, Portal, Counter-Strike: Source, and Left 4 Dead via an update on Steam. The Falcon has yet to become an elaborate AI construct that can sell itself, so both Valve and Novint are tossing out a joint bundle consisting of the Falcon controller and The Orange Box set.

The only machine that I need in my life is our own lovely mascot here at Destructoid. I definitely do not need some crazy, bulky controller just to get spawn-camped in Team Fortress 2. Perhaps I am just a child of the listless past, one in which we never envisioned robots crushing skulls of children lying in the streets of an Armageddon Earth.

What do you guys think? Signs of a nuclear winter, or an awesome controller?