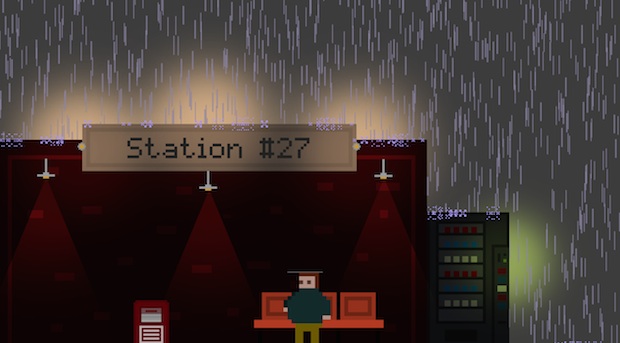 Sad story: I was supposed to be on the 2014 Train Jam, which is a game jam that took place on a train traveling from Chicago, IL to San Francisco, CA. I’m not a programmer, but I am a creative, and a decent composer. The plan was to cover the event while making music for all the games that came from the other jammers on board. But I had some scheduling conflicts that had me missing out. Friends are still telling me how great it was.

It’s not as nice as being there, but at least I can play the games they made on Train Jam 2014. Developers from all over made some pretty interesting stuff on the 52 hour ride, and it’s all free for you to play.

They were tired on this long ride, so a game about sense deprivation kind of makes sense. You can download the relazing Stars Will Guide Us, or the suffocating 14 Seconds. Or try this fun browser game about spiders or something. Or this one called DiscoMath, which I’m not smart enough to play. I like where Station 27 is going.

Definitely check out Disconnect if you have an Android device. Vlambeer’s Rami Ismail really sold me on it. It requires belts, I think

More are coming, so check back!