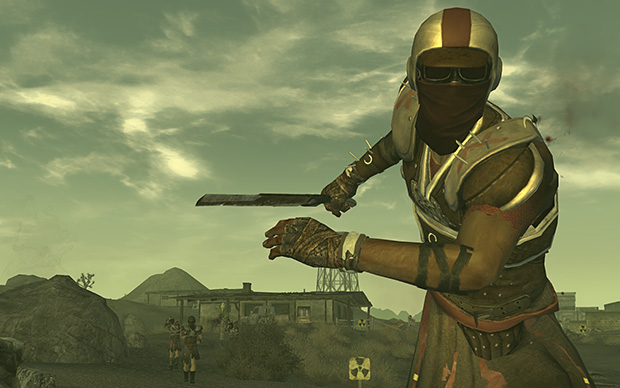 When I spoke with him at a Fallout: New Vegas demo last month, senior producer Jason Bergman told me that the game is much more open-ended than Fallout 3 was. While New Vegas has no distinct “good” and “evil,” you certainly have the option of playing it in those ways. In fact, you can go through the entire game without killing anyone, although Bergman cautioned that it’s “exceptionally difficult.” (That sounds like a challenge for those who are willing to tackle Hardcore Mode.)

And on other side of the coin, you can murder all but one of the game’s 2,200 or so characters [update: except for children, whom you still cannot hurt]. (Bergman explained that developer Obsidian had to make that particular person un-killable, because otherwise, you could get yourself in a corner where you would be unable to finish the game.) So go to town, you psychopathic killing machines!

Bring harmony or wanton destruction to the world of Fallout: New Vegas when it launches for PlayStation 3, Xbox 360, and PC, on October 19, 2010 in North America, and October 22 in Europe.