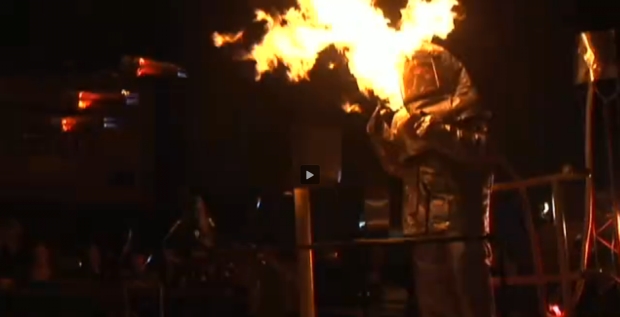 Have you ever thought to yourself, “Gosh, it’d sure be fun playing videogames while blasts of fire hit my face!”  Well, the latest episode of Boing Boing Video has the answer for you!

Dance Dance Immolation is a mod of Dance Dance Revolution that brings in lots and lots of fire. Miss a step while dancing and you’ll get burned! People play DDI while wearing a flame-retardant suit to prevent injury of course, and according to the Boing Boing Video interview (after the jump), no one has been hurt by this mod … yet.

The crazy mod was created by Interpretive Arson and they’re going to have another event in two months over in Oakland, which is just an hour away from me … Oh f*ck. You people are going to make me go do this now, aren’t you?